Everybody needs good neighbours… The Rudds have just brought a place in a certain street in Yarralumla and shortly after all residents of the street received in their mailboxes a neatly typed missive saying “please respect our privacy”. Goodness me, such an invitation over-rides one’s desire to indeed defer to such a gracious request. NSW […]

Everybody needs good neighbours… The Rudds have just brought a place in a certain street in Yarralumla and shortly after all residents of the street received in their mailboxes a neatly typed missive saying “please respect our privacy”. Goodness me, such an invitation over-rides one’s desire to indeed defer to such a gracious request.

NSW conference no-shows. I went to the NSW Major Projects Conference this week — touted as an opportunity for the NSW Labor government to brief industry on the direction of major infrastructure in the state. Representatives of the major construction companies and associated players in the industry were there with the anticipation of key speakers such as the treasurer, minister for transport and minister for planning. We got a stump speech from the minister for transport — who arrived five minutes before his speech and left five minutes after — and the minister for community services (not really infrastructure!). No show from the others — which left everybody annoyed but cynically unsurprised, especially after the Metro debacle.

At the Queensland Major Project Conference, held last week, the premier and major ministers turned up — and other similar state conferences on the same theme have had good ministerial participation. I felt sorry for the CEOs and senior management of the state-owned corporation and govenerment departments who did their bit without any political support or vision.

Lachlan’s fingers in too many pies. The Sydney media writers who reckon Lachie Murdoch might join James Packer at Ten forgot that he is deputy chairman of Prime Media, Seven Network’s regional affiliate. Where he has an 9% stake. That puts Lachie in the same position as the feted Bruce Gordon of Bermuda, who controls WIN and has a 13% stake in Ten, but can’t go on the board.

He can’t be with both Ten and WIN, nor can Lachie be on Prime and Ten at the same time, unless he sells out of Prime. As deputy chairman, and supported by Kerry Stokes, do you reckon that might happen? That’s why those pictures and stories last weekend of Lachie meeting James Packer at Elleston (Packer’s Hunter Valley property) have set off some tiny alarm bells. Time for ACMA to ask what’s going on here, I think.

Sightings: Peter Costello was relaxing with a wine and Bruce Guthrie’s News Limited exposé Man Bites Murdoch on a flight yesterday. We’d have thought he’d be plowing through that other autobiography by his former boss… 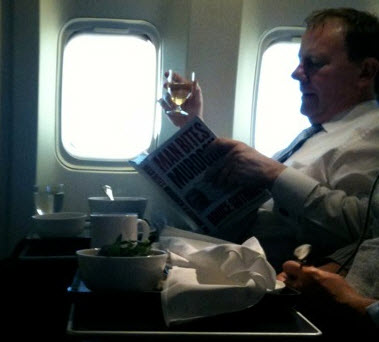