The magical productivity of the construction <br>industry

When it comes to building industry productivity, there's economic modeling, and then there's Econtech modeling...

Some rituals from the Howard era die hard. One of them is the enthusiastic work undertaken by the economic modelling firm Econtech — or KPMG Econtech as they’ve been since 2008 — purporting to show that much of Australia’s recent economic growth has been because of the Australian Building and Construction Commission. This week, they produced another report on construction industry productivity, which received generous coverage from The Australian.

Econtech has form in this regard. It was Econtech that produced the notorious report in 2007 modelling the reversal of all IR reforms since 1993, which was used by the Howard government to argue that Labor’s plan to remove WorkChoices would inflict massive economic damage. Incidentally that, too, was trumpeted by The Australian.

Later in 2007, the ABCC, keen to demonstrate that its Stasi-like powers were justified, commissioned Econtech to establish just what a boon its vendetta against the CFMEU had been for the Australian economy.

Econtech used several techniques to accomplish that task: they compared the difference between housing and non-housing construction costs from Rawlinson’s Australian Construction Handbook to see if the higher cost of the more unionised non-housing construction sector was shrinking in comparison with housing costs; they compared actual building industry productivity to what they projected building industry productivity would have been based on the rest of the economy, and they used some case studies.

The resulting report claimed that building industry productivity had surged by 9.4% (and keep that figure in mind) and delivered a $15 billion injection into the economy. Most of the media — and by no means just News Ltd — dutifully recycled the claims without testing them.

The problem was, Econtech had stuffed up. Badly. A number of academics questioned the methodology and maths of Econtech, none more so than serial critic of the Howard government’s IR laws, Professor David Peetz of Griffith University. Peetz, in a devastating critique, showed that Econtech had got its sums wrong. Rather than a 9.4% reduction in the gap between housing and non-housing construction costs, the reduction had been 1.3%. Peetz also pointed out problems with Econtech’s effort to compare actual productivity in the sector with projected productivity based on the rest of the economy, including how, in spite of the absence of the ABCC and royal commissions, construction industry productivity had surged far above predicted levels in the late 1990s.

Peetz, by the way, had been the subject of particularly grubby smears by Eric Abetz, Phil Barresi and Joe Hockey between 2005 and 2007 in relation to his annoying tendency to point out how the Howard government’s claims about WorkChoices didn’t stack up.

A year later, in August 2008, the ABCC released an updated report by Econtech. That report quietly fixed the howling error made the previous year, but kept the claims about massive economic benefits.

In 2009, when former Federal Court judge Murray Wilcox was commissioned by the Rudd government to consider the future of the ABCC, he looked at Econtech’s work and asked Econtech to respond to Peetz’s critique. As Wilcox noted in his final report, Econtech didn’t even attempt to rebut Peetz’s analysis or defend its 2007 report. “The 2007 Econtech report is deeply flawed,” Wilcox concluded. “It ought to be totally disregarded … the 2008 Econtech report indicated a much less dramatic narrowing of the difference between commercial and residential building costs.”

In 2009, the ABCC did not ask Econtech to update its report. Instead, the Master Builders Association did. And they asked them again in July this year, leading to the report released this week. Econtech is sticking to its methodology, regardless of flaws, but there’s still no evidence of the dramatic productivity increases claimed. The gap between housing and non-housing construction costs has, according to Econtech, reduced by 4.8% since 2004 nationally.

Peetz pointed out to Crikey that Econtech had carefully selected 2004 as the starting point for its comparison on construction costs (claiming it was because of a break in the data for one set of costs). “It is all about choosing a start date to suit your argument — 2004 was the year when, according to the Rawlinson’s data, the gap between commercial and residential construction costs reached its maximum, a very convenient year to use as a base period, especially when the base period that you originally used (the 1994-2003 average) makes it apparent the building industry reforms have had no impact on productivity.”

Econtech’s figures for recent years also raise some interesting questions. The gap in costs in Queensland is now wider than it was in 2005. The gap in Victoria has widened slightly since 2007. In fact, the gap nationwide is only slightly smaller than it was in 2007, because it widened significantly in 2008 and 2009 before reducing this year. If the ABCC is driving productivity improvements in the construction sector, it’s been doing a pretty lousy job recently.

But most bizarrely of all, Econtech inexplicably continues to use, as the basis for its modelling of the economy-wide benefits of the ABCC-driven surge in construction sector productivity, that same 9.4% figure that it erred in arriving at in 2007, the figure that was demolished by Peetz and which Wilcox said should be disregarded. “Consistent with the earlier reports, this report bases its modelling of economy-wide impacts on an outperformance in construction industry labour productivity of 9.4%,” this year’s report says, copying the approach of previous reports.

The Australian quoted the 9.4% figure as well, with its article referring to “a new analysis [that] shows the body has added 9.4% to labour productivity in the construction industry” (it’s not like the journalist concerned wasn’t aware of criticisms of Econtech, given he reported them in 2008).

“This is money for jam for Econtech,” says Peetz. “Given that productivity numbers change from one year to the next, you would think that the bottom line claimed productivity gain of 9.4% would change from one year to the next. Instead, it must be the stablest number in contemporary economic statistics, stubbornly resisting even the slightest variation, despite massive changes in the economy around it over four years. The remarkable stability in this statistic means that it is not really much work for Econtech to produce this report.”

Crikey contacted Econtech for comment but no response had been received by deadline.

The Master Builders’ Association went further than Econtech and employed the old trick of multiplying the purported gains to GDP claimed in the report across a long period. “The community’s welfare gain is $59 billion over ten years,” said the CEO of the MBA, a claim recycled verbatim in media coverage.

But let’s give the final word to the body that started it all, the ABCC. Last week, Senator Doug Cameron quizzed the new ABCC head, Leigh Johns, about its use of Econtech reports. Given the criticisms of the reports, Cameron asked, why did the ABCC still have them on its website?

The Econtech reports are no longer on the ABCC website, Johns told Cameron. “They were conducted in 2007. It is now 2010. We have moved on.”

Clearly some others haven’t. 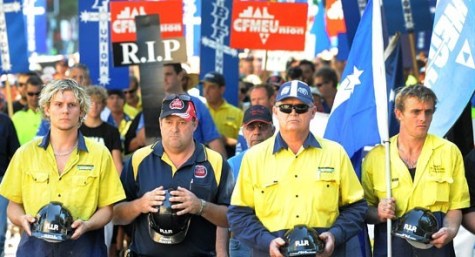 Will the building watchdog bill pass? It doesn’t matter

Pheww!! After reading this piece, David Peetz’s critique and Doug Cameron’s inability to get an honest answer from Leigh Johns, I believe the ABCC should be closed down immediately, its members, together with Econtech management, tarred and feathered and driven out of town on a horserail.

Frank – I believe Greens Senator Rachel Siewert has a bill languishing on the notice paper to do just that, if only Doug Cameron could get his ALP colleagues to support it!

Anything KPMG is involved in is suspect. One just needs to read of their dreadful stuff-ups during the Nu Labour years in Britain.

I don’t suppose Econtech investigated the incidence of workplace accidents since the ABCC? We now have a situation, where members of the CFMEU can be charged and dragged before the Court AFTER a safety issue has been raised and corrected by the employer, over a ‘suspicion’ that didn’t even occur on the job? Ark Tribe is facing a hefty fine and or six months jail for refusing to answer questions put to him by the ABCC? No other worker has to confront such injustice, in fact, even Ivan Milat(convicted serial killer of about 9 backpackers – could be more?) was afforded the usual systems of justice we all have(unless you work in the building industry?);

For a Labor govt that likes to boast of its history – born out of the union movement blah blah, the fact that they allow the ABCC to exist is a travesty! More like South Africa under apartheid! Shame!

This is an example of inexplicable lack of action by Rudd and then Gillard, in essence giving the Opposition a free kick.

Labor had a chance to reduce the number of Government organisations that are on the public teat and improve the industrial landscape at the one time and failed.

I just don’t get it.