Why the independence of the Murray Darling Basin Authority matters

With increasing diversions of fresh water, saltwater is coming further into the Guippsland lakes system and pollution events such as algal blooms have become increasingly frequent, writes Lionel Elmore.

Throughout the national debate regarding the Murray Darling rivers the independence of the Murray Darling Basin Authority has been a key issue. Government interference in the science used to inform management is seen as unacceptable. It is a key issue for all parties to the current debate.  In that context, an interesting little spat has developed around the Gippsland Lakes Taskforce.

The Victorian State Government established the Gippsland Lakes Taskforce (GLT) in November 2001 in response to a succession of algal blooms and fish kills with an Independent Chairman and Advisory Board. 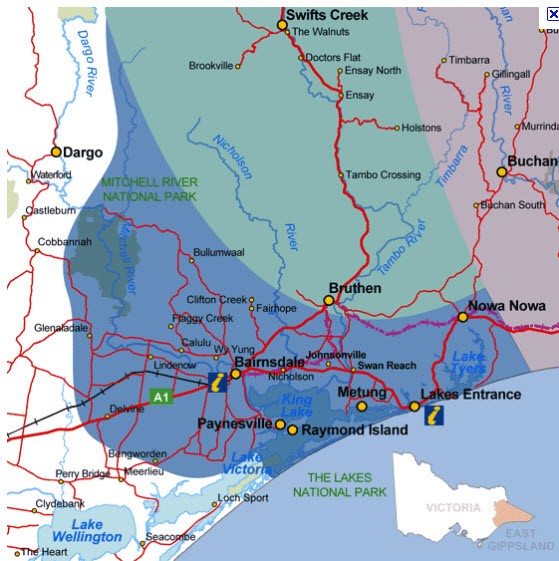 With increasing diversions of fresh water saltwater is coming further into the Gippsland Lakes system and pollution events such as algal blooms and fish kills have become increasingly frequent. The lakes support a multi million dollar tourist industry with significant, recreational and commercial fisheries. An extensive system of fresh and saltwater lakes, they run along Victorian East Gippsland coast and are fed by some of that States largest rivers.

These include the Thomson River, dammed to supplement Melbourne’s water supply and the Latrobe River draining the Latrobe Valley with its power stations and pulp mills. The Nicholson and the Mitchell Rivers drain vast forested catchments with farmlands in their valleys. Large areas of these catchments were subject to bushfires in 2003 and 2006/07.

In 2007 after the bush fires there were algal blooms in both lakes which killed molluscs, seagrass, saltmarsh and usually tough paperbarks that grow along their shoreline.  With the loss of ‘swangrass’ (seagrass) from the Gippsland Lakes, the Black Swans that feed on it moved onto farms and began feeding on Lucerne.  The Departments of Sustainability and Environment’s (DSE) first response was to issue permits to shoot swans which was stopped after a brief campaign by locals with DSE providing resources for farmers to successfully deter swans from lucerne paddocks.

The  ‘Around the Jetties’ newsletter was established more than four years ago to keep the recreational fishfolk that fished the Gippsland Lakes and Lake Tyers informed as to what was happening in all matters fishing and ecological. It is an informative e-magazine that describes government projects and initiatives and discusses issues from conflict with commercial fishfolk to good, poor and unusual catches. The August Issue 2010 outlined the taskforce’s response to the broader issues including the decline in fisheries and loss of seagrass;

‘”In 2008 the Gippsland Lakes Taskforce … undertook two snapshot studies. One was of the current seagrass situation and the other study involved the sampling of the fish communities of the Gippsland Lakes, following the toxic blue  green algal blooms of November 2007…. These short studies (snapshot) were to provide a baseline for future  studies measuring changes in seagrass and fish communities.”

More than two years on nothing has appeared to have happened and local fishfolk in particular were keen to see the results of these surveys. In the same issue of ‘Around the Jetties’ it stated;

“The Taskforce indicated that it intended to replicate the sampling in mid 2009. We have now reached mid 2010 and there has been no indication of  further studies as recommended in the report on the fish biomass and seagrass status.”

This week a letter was addressed and sent to the Editor of ‘Around the Jetties’ – and copied in to the bulk of other subscribers at the same time, using a copied mailing list.  This letter did not come from the GLT but DSE. It was not tagged as having been circulated to GLT:

In regard to the monitoring:

In regard to your comments about “very little information is released to the public by the Taskforce”:

I would be interested to hear from you as to what additional activities you propose the Taskforce should undertake to disseminate this information further.

In regard to your comments regarding the Taskforce and Shore Crabs:

XXXXX what I found most disappointing was that you didn’t take the time to make a simple phone call or a quick e-mail to find out the true situation, before writing and distributing your views.

The actual comments contained in Around the Jetties are little more than a ‘mild nudge’ to the GLT, but one that received an extraordinary response not from GLT but from DSE, totally undermining their independence. DSE is a body whose management impacts the catchment and waterways of the Gippsland Lakes perhaps more than any other. They play a key role in management of timber harvesting, fire fighting, chemical use for weed control and fuel reduction burning. It is vital that the taskforce operate at arms length from a body it may have to advise on management.

The Editor will no doubt respond, but they are in a difficult position.

The GLTC is in a more difficult position as it now appears to be no longer independent and actively managed by the government and through the Regional Office of DSE and have not even displayed the independence to choose whether or not to respond to any criticism — or how.

This form of “catchment anagement” certainly underscores the importance of ensuring the ongoing independence of the Murray Darling Basin Authority and why it will continue to be such a “hot issue”. And all this just before the Victorian State Election.

The Baillieu Dump: terminally ill miss out on beds in Gippsland

Bradfield will be a test for the Liberals, mark my words