Victorian voters in rural and regional electorates say health services and hospitals are a key concern in the lead-up to next month's state election, exclusive research commissioned for Crikey has revealed.

Victorian voters in rural and regional electorates say health and hospitals are a key concern in the lead-up to next month’s state election, exclusive research commissioned for Crikey has revealed. 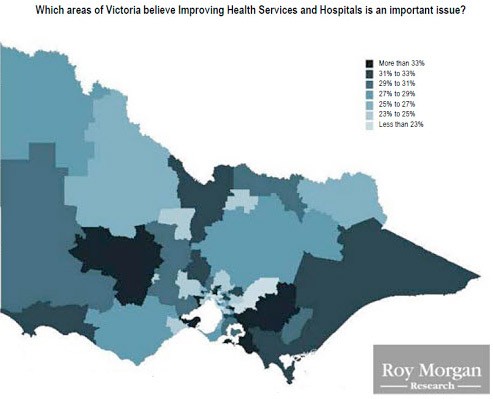 But health and hospitals could also wrest seats away from the ALP, with 33.1% of voters in the bush outpost of Ripon, held by agriculture minister Joe Helper by 4.3%, expressing concern. Helper snagged the seat in 1999 when Liberal voters rebelled over Jeff Kennett’s neglect of the state’s outlying areas. He’s managed to hold on in the two elections since, despite substantial slippage in Labor’s regional halo.

A recent auditor general report on family farms indicates rural Victorians have cause for concern as they die younger and contract diseases more often than city dwellers and persist with restricted access to primary healthcare.

Health was proportionately less of a concern in the inner-city seats where the contest is between Labor and the Greens, reflecting that area’s relatively good access to hospitals and GPs. However, the issue was still on the radar of voters in suburban Labor-held marginals like Forest Hill (32%), Mitcham (31.6%) and Frankston (28.4%).

Liberal MP Ken Smith, who holds Bass by 5.6%, says health is a hot topic partly because of the closure of Phillip Island’s Warley Hospital, which the federal Coalition has pledged to re-open.

“People on Phillip Island have to go to Wonthaggi,” Smith thundered. “The hospital there should be upgraded to a sub-regional facility to enable more doctors, nurses and triage.”

The 22-year Legislative Assembly veteran told Crikey infrastructure suffered when the local population doubled or tripled during special events such as the Phillip Island Moto GP, held earlier this month. Smith says stressed paramedics mean patients are often ferried to Melbourne in helicopters, rather than being treated closer to home.

Morgan polling scion Gary Morgan said the health issue is embellished in rural areas because “people in rural districts feel as if they’re not being properly looked after”: “People need sophisticated equipment and highly skilled people to help them. That’s why rural and regional health remains a key issue.”

“We’ve asked the government and Coalition to commit to a rural medical workforce rescue package to improve attraction and retention of country doctors and ensure country Victorians’ access to medical care in the future. The Brumby Government’s recent investment in rural health infrastructure was significant and welcome, as was the Coalition’s promises to rebuild rural hospitals. However, almost nothing has been done to ensure there are enough doctors to work in these country hospitals.”

As part of the state budget, the government promised a $618 million boost to regional and rural health services and has also pledged a fleet of new country ambulances, however the coalition has slammed the face-saving measures as inadequate.

Murdoch, Baillieu and Morgan: a story of old Melbourne families