The Age of getting smaller and smaller ... pressure mounts on the Audit Bureau of Circulations ... the Tocumwal "experience" ... Google has cash for new media innovators ...

The Age of getting smaller and smaller… The tabloidisation of storied Melbourne broadsheet The Age continues apace, with the Saturday sport and business sections set to be downsized and rolled into tabloid liftouts, echoing the changes recently rammed through at The Sydney Morning Herald, Fairfax sources have reported. The new format will bring the paper into line with its weekday sister, in which the broadsheet news pages are wrapped around the half-sized sport and business lift-outs.

But it’s unclear at this point whether The Age will go the whole hog and merge sport and business into the one lift-out like The SMH, a move that would inevitably lead to column-inch cutbacks. The Age has had a long struggle embracing a train-friendly future, after the weekday sport section shrunk in 2005 as then-editor Andrew Jaspan spruiked a slimmed-down Berliner format for the rest of the paper. However despite the pronouncements, Fairfax tech heads later discovered the organisation’s Tullamarine printing presses couldn’t cope. Age CEO Don Churchill did not respond to Crikey‘s request for comment. — Andrew Crook

Trust us, says circulation body. Pressure is mounting on the Audit Bureau of Circulations to urgently review its definitions in the wake of debate at Monday’s annual general meeting prompted by Crikey‘s revelations that at least 20% of the daily circulation of The Age was being bulk-delivered to schools and universities in 2004 and 2007.

Yesterday afternoon, the ABC sent out a press release claiming to have “affirmed their commitment to providing the media industry with circulation they can trust”. The bureau confirmed that a special “Rule Review Sub-Committee” would be formed in the coming weeks to examine how sales could be broken down by price point with the possibility of a new “bucket” created to include the cut-price education subscriptions currently hidden from advertisers.

Two weeks ago, Crikey revealed that students at the University of Melbourne were being offered a year-long subscription to The Age for $1 when they renewed their union membership for 2011. However, as demonstrated by Crikey (and Mumbrella, in the case of The Sydney Morning Herald) large proportions of these copies end up in recycling bins, despite being counted in the ABC’s headline net paid sales figure. The revelations mean that advertisers and agencies had been effectively fleeced out of millions of dollars by paying for space that circulated in much smaller volumes than the ABC — whose general committee is dominated by publishers — claimed.

The campus and high school scheme extends beyond Fairfax. In his book Man Bites Murdoch, former Herald Sun editor-in-chief Bruce Guthrie wrote that close to 20% of his newspaper’s daily circulation of about 500,000 was channelled through schools, universities and sponsored events. The Australian also operates a tertiary scheme, but in far fewer numbers.

In the release, Media Federation of Australia boss Carol Morris said she looked forward “to making swift progress in these areas by working with advertisers and publishers through the newly formed sub-committee”. ABC chairman and News Limited employee Dr Stephen Hollings, who will also lead the rules sub-committee, said: “The ABC’s open and transparent review process ensures that the rules continue to evolve to meet the dynamic nature of our industry … The integrity of circulation numbers is vital to the credibility of the industry.”

The committee will also address the other festering sore that continues to annoy advertisers — the fact that newspapers and magazines can average their sales over the audit period rather than submit to a more rigorous issue-by-issue probe. — Andrew Crook

The Tocumwal “experience”. Bon Jovi and Pink play at the Tocumwal Golf Club! An ad in the October 20 edition of the Cobram Courier: 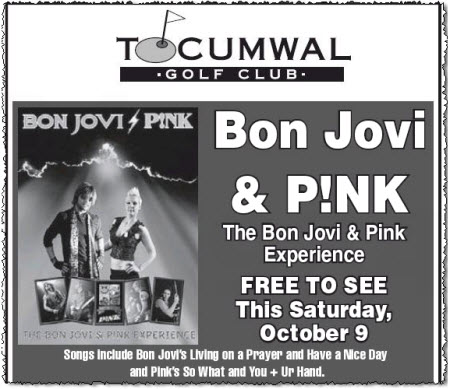 Of course they didn’t, and the Courier had to apologise…

Putting profits to good use. From across the Pacific, MSNBC.com featured one for the ‘inappropriate ad placement’ file… 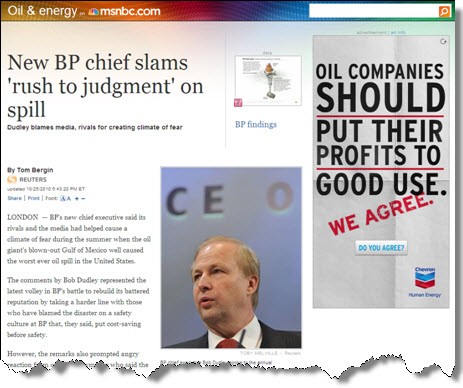 Collingwood hate crimes. A letter to the editor in the Seymour Telegraph: 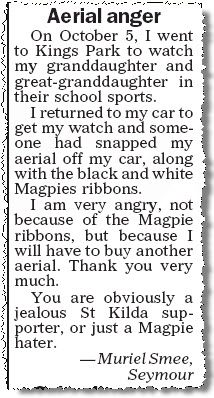 “Labor’s $250 million licence fee rebate holiday for the free-to-air TV stations is expected to be extended beyond next year.” — The Australian

“Google has pledged to donate $5m (£3.15m) in grants to non-profit news organisations to help ‘develop new approaches to journalism in the digital age’.” — The Guardian

“NPR received a bomb threat Monday, five days after its decision to fire news analyst Juan Williams sparked a hugely negative reaction … Williams was dismissed as an NPR analyst late Wednesday after he appeared on Fox News Channel’s O’Reilly Factor and expressed his personal anxiety about flying on planes with people in ‘Muslim garb’.” — Washington Post

“Social media played a significant role during the Williams hearing as it became a news ticker from inside the courtroom, sharing vivid details of the crimes of Russell Williams, a former colonel in the Canadian military, who was found guilty of two murders of young women and 86 other counts of break and enter, s-xual assault and other crimes.” — J-Source.ca

“The clever devils atthepoke.co.uk — the satirical British web site that previously gave us the Wire-inspired Monopoly board — have turned their attention to another popular cable series. They’ve designed a series of children’s books that mashes up Mr. Men, the adorable, bodyless characters designed by Roger Hargreaves, with Mad Men …” — New York Times

What’s black and white and (in the) red all over?