It was Joe Hockey’s week

Well if Joe Hockey’s main intention was to lift his profile, it’s worked

Well if Joe’s main intention was to lift his profile, it’s worked — the Liberal Party seems to be moving to a more historically normal situation for an Opposition, with half a dozen Opposition Leaders’ in waiting all scrambling for media coverage — although the dynamic of the hung parliament probably gives them more potential coverage to fight over.

As the Government continues to claim the high ground of economic rationalism while at the same time shuffling away from any kind of reform, either social or economic, the Howard and Costello bitching did at least get to the nub of the divisions in that party.

Unlike Hawke and Keating it wasn’t totally about personal ambition — its the elitist, patronising Whigs who’ve thoroughly lost control to the pick yourself up by your bootstraps, small business battlers — those who used to vote for Menzies but probably didn’t share many of his values or any of his background.

For those who like irony — the Whigs have now all but taken over the Tories in the UK, but the Liberal Party here has gone the other way. 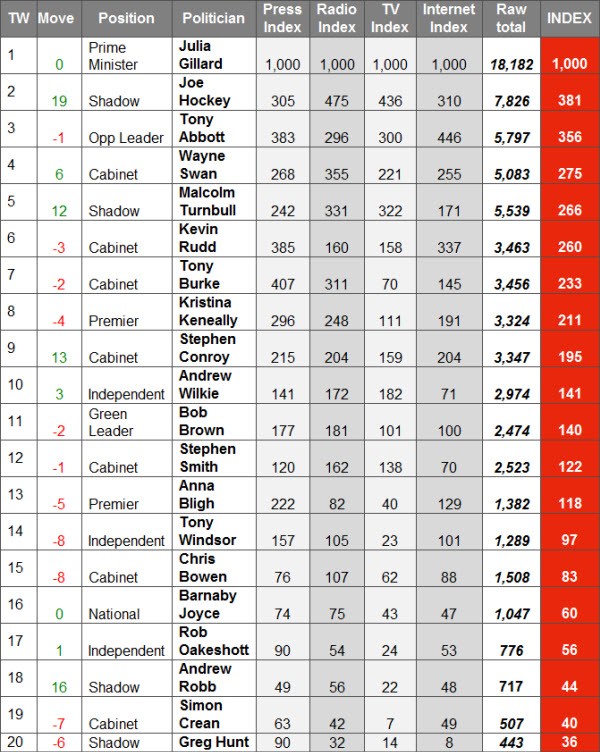 There continues to be little interest in politics in radioland, even regional areas calming down somewhat, with only 17 calls mentioning the Minister for Water over the last week. The Rudd factor continues to baffle.

The once and future king of television got a monstrous amount of coverage this week, so here’s one more number to add to the pile.