Shonky products and shonky ploys: our worst of the worst

Check out the shonkiest products and ploys in the shops, with consumer watchdog Choice naming its annual worst-of-the-worst awards in Sydney this afternoon. The Commonwealth Bank, Coles, Nurofen and LG have all been named and shamed for ripping off consumers.

Feed your family for less than $10 — if you have some of the ingredients already in the fridge (which, incidentally, may not as energy-efficient as it claims). Earn $20 in flight rewards — by purchasing $12,000 in goods. Take a pain-killer for your bad back — that won’t actually cure it. Oh, and those wrist bands that promise balance and wellbeing? You’d have to be a sucker.

They’re some of the shonkiest products and ploys, according to consumer watchdog Choice, which is naming its annual worst-of-the-worst awards this afternoon. The Commonwealth Bank, Coles, Nurofen and LG have all been named and shamed for ripping off consumers.

Crikey has already rapped celebrity chef Curtis Stone over the knuckles for promising a $7.76 Coq Au Vin meal for the family that excludes the bottle of wine apparently already in the pantry. Now Choice has awarded his inescapable Coles ads with a Shonky Award for the recipes that will only cost less than $10 if you have a well-stocked cupboard.

The Commonwealth Bank has been called sneaky for its standard awards card, which requires a $12,000 annual spend with American Express (higher for Mastercard/Visa) for a mere $20 in flight rewards. Plus, says Choice, “one point only equals half of one frequent flier and that salient fact is hidden away in some mighty small print”.

Painkillers that promise to target specific pain types have also been exposed as a crock. Nurofen labels pills for back, period, migraine and other types of pain even though they all contain identical ingredients. “The shonkiest aspect of this type of marketing is that the fast-acting painkillers labeled for specific pain types are more expensive,” Choice said in bestowing the unwanted honour at a bay-side Sydney function today.

LG’s side-by-side refrigerator is much more harmful to the environment than its energy star rating suggests, and Choice says the Korean manufacturer has form in overstating how green its washing machines and air conditioners are (LG claims the fridge mix-up was a mistake).

Which is all bunkum according to Choice, which tested them under controlled lab conditions and found “it did little else than empty purchasers’ wallets”.

Choice also warns consumers over extra virgin olive oil, with many brands not nearly as chaste as they claim. Of 28 brands tested half defied their name.

“The mainly Mediterranean manufacturers’ cried foul blaming everyone else in the supply chain. But consumers still aren’t always getting true extra virgin quality at the point of sale, despite paying a premium,” the watchdog chastised. “Ultimately, Choice wants ‘extra virgin’ to be regulated under the Food Standards Code with mandatory requirements that all olive oils labeled ‘extra virgin’ meet basic purity and quality standards for the duration of their expected shelf life, as well as carry a suitable date so that consumers are able to choose the freshest oils.”

Medalist says its ‘recreation rope’ conforms to Australian standards and is suitable for “outdoor recreational use” — but it could prove deadly on your next rock climbing expedition. It’s made from tissue paper and snaps with minimum force. 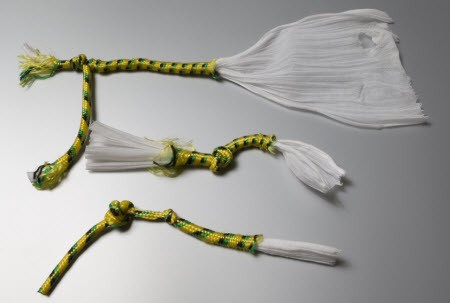 Buyer beware, says Choice’s Christopher Zinn; despite new consumer and credit laws “we’re continually amazed by marketers’ efforts to take Australians for a ride”. A full list of the Shonky Award winners is available on the Choice website.

Voluntary consumer action is one of a number of actions outside the CPRS that could reduce Australia greenhouse gas emissions, writes Gordon Renouf.

Consumer Confidence indexes and other exercises in branding

Nurofen’s pretence that they have a different formulation for different types of pain is a truly incredible ripoff. I fell for it once and soon discovered to my amazement that a supposedly reputable brand was charging four times the normal price for this outrageous con.

Once burnt I learnt my lesson – from now on I only buy unbranded ibuprofen. And for that matter unbranded paracetomol is the equal of the brand cons involved in Panadol and the like.

Our mentality in buying many of these branded products says a lot that is unattractive about our status anxieties. We are anxious not to feel or look ‘cheap’ so we hand over to brand owners (collectively) large amounts of money to in a futile attempt to protect our status.

“Crikey has already rapped celebrity chef Curtis Stone over the ”

Could have been worse.

[Choice also warns consumers over extra virgin olive oil, with many brands not nearly as chaste as they claim. Of 28 brands tested half defied their name.]

This is for the simple reason that Australia does not have laws regulating this on imported oils. Apparently the same companies do not do the dilution with non-olive oils in their home markets because there IS strong EU law on it. (but I would never trust Italian olive oils anyway because there are vastly more Made in Italy olive oils sold than the entire Italian olive crop–it is common knowledge they import masses from places like Spain and Tunisia and Algeria.)

One presumes the ACCC could bring a case on the grounds of false advertising? But this story is years old and nothing gets done about it.