Laurie Oakes rarely gets it wrong. So you'd think The Australian's media diarist Caroline Overington would have believed the veteran Canberra player when he told her he'd previously won a prized Walkley Award. Also the NT News croc 'exclusive' and see it first on Channel Nine news.

Overington “couldn’t be more embarrassed”. Laurie Oakes rarely gets it wrong. So you’d think The Australian‘s media diarist Caroline Overington would have believed the veteran Canberra player when he told her he’d previously won a prized Walkley Award. As an excited — and apparently smitten — Overington reported on Saturday:

LAURIE Oakes obviously has quite a bit in common with Errol Flynn, and Diary doesn’t just mean the ability to set women’s hearts aflutter.

Flynn — like Cary Grant and Fred Astaire — never won an Oscar, and the Nine Network’s Oakes, well, he’s never won a Walkley for excellence in journalism for an actual story.

But he has. And as Overington acknowledges in a groveling apology in today’s media diary, The Sphere even told her “I think I might have won one”:

…Oakes, being a man of that generation that wouldn’t dream of arguing with an excitable woman, said: “Well, if you say so . . .” but, in point of fact, Laurie Oakes does have a Walkley. He won it in 2001, for a “mean and tricky” government story, and your host here at Diary couldn’t be more embarrassed.

Strangely, there’s been no apology to Four Corners reporter Sarah Ferguson, who Overington attempted to heap praise on in another recent column. The recognition instead went to a “Sarah Henderson”, the former ABC broadcaster turned Liberal Party candidate or, perhaps, the cancer-beating farmer and author. We would have pointed out the case of mistaken identity, but Overington’s blog still doesn’t allow comments. — Jason Whittaker

NT News watch #1: The Territorian tabloid is in fine form today, first with this terrific yarn about a giant pig wreaking havoc… 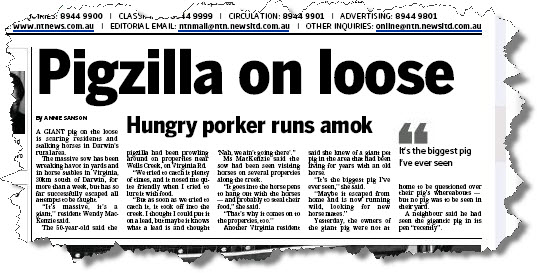 NT News Watch #2: …and then this terrifying story of a mutant baby chicken. 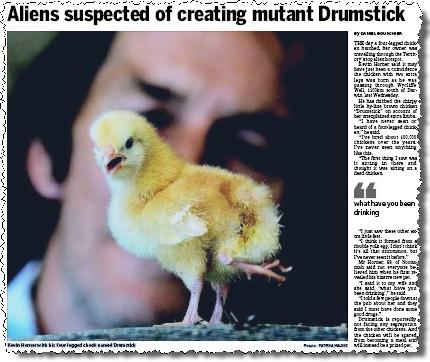 See it first on Nine. When you take out a prominent page-two ad in the Daily Telegraph to advertise a news bulletin, you must be sitting on a big story. Or not. Either way, we can’t wait for this Nine News special: 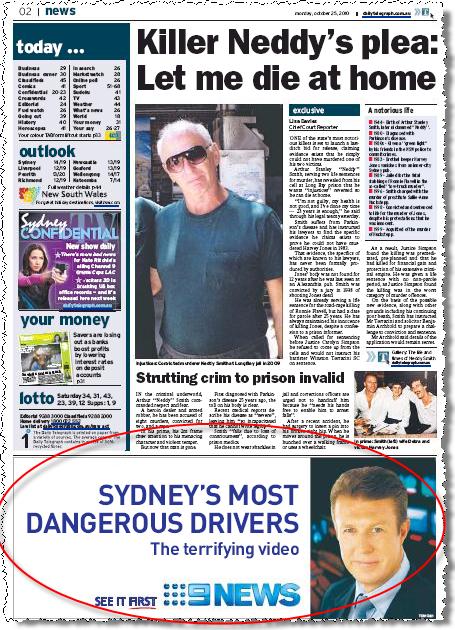 Vox pop of the day: It’s becoming hard to beat the defending champs over at the Adelaide Advertiser. Today’s winner is about bad hair cuts. Keep asking the tough questions…

“At that point the minister was tapped on the shoulder by Packer. Conroy stopped mid-sentence and the two men made a long walk between tables packed with media executives, television personalities and journalists for a private chat in the auditorium. It was unsubtle. But that seems to be the point.” — The Australian

“The search engine first said in May it had mistakenly collected private information when its Street View cars were gathering up panoramic images, but said at the time the data was only ‘fragmentary’ because the cars were moving. However after investigations by “a number” of external regulators, Google admitted some whole emails, passwords and web addresses had also been picked up.” — Daily Telegraph

“The creators of South Park, the animated Comedy Central series, apologized on Friday to the creators of a Web comedy video satirizing the summer blockbuster Inception, saying that they had used dialogue from a video on the Web site CollegeHumor.com.” — New York Times

Assange on the run, even during interviews

“WikiLeaks founder Julian Assange and his organisation are famously liberal with the secrets of the U.S. military – but the man is not so forthcoming about his own private life. Australian-born Mr Assange walked out on a CNN interview after the reporter had the temerity to ask him about his often terse relationship with fellow workers – and an even more serious personal court case in which he was cleared of sex abuse charges in Sweden.” — Daily Mail