Melbourne's ring of inner-city seats increasingly populated by iPhone-wielding professionals remain a hotbed of climate concern as the fight between Labor and the Greens warms up before next month's state election, according to exclusive Roy Morgan research released to Crikey.

Melbourne’s ring of inner-city seats increasingly populated by iPhone-wielding professionals remain a hotbed of climate concern as the fight between Labor and the Greens warms up before next month’s state election, according to exclusive Roy Morgan research prepared for Crikey.

Voters in the crucial electorates of Northcote, Richmond, Melbourne and Brunswick — which could all fall to the Greens with the help of Liberal preferences on November 27 — said global warming and the environment are a major worry, according to a comprehensive state-wide survey of 35,791 electors carried out between January 2007 and August this year.

Compared with other polling revealed by Crikey last week, carbon outranked crime by 30 percentage points and the economy by 17 percentage points in the teetering seat of Richmond, held by Housing Minister Dick Wynne by just 3.6%. Melbourne, held by education minister Bronwyn Pike by 1274 votes, showed a similar green hue. But the climate issue has also spread to other knife-edge seats where the fight is between the ALP and the Liberals, with Prahran, Mitcham and Mount Waverley (held by Maxine Morand by just 0.3%) identifying the issue as important. 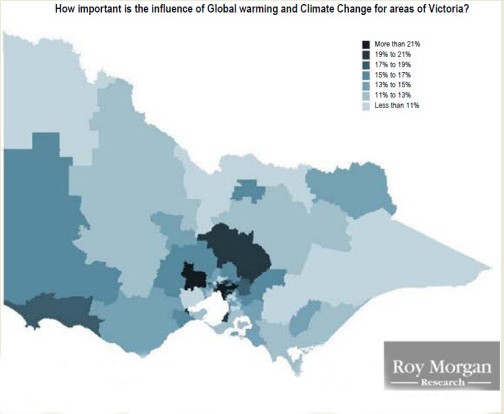 Victorian Greens’ honorary figurehead and game theory aficionado Greg Barber told Crikey that the polling “confirmed what we’ve been getting from our door knocking over the last 12 months”.

“Labor won’t do anything serious about climate change unless the Greens have a firm hand on their shoulder,” he said. “John Brumby’s got as many polluting projects on the drawing board as he does projects to cut emissions.”

But despite country fiefdoms like Rodney (10.6%), Craig Ingram’s seat of Gippsland East (8.4%) and Murray Valley (6.9%) ranking towards the bottom of the list, Barber said tree hugging was evident in many regional areas, with “green hotspots all over the state” showing select booths with his party in double figures. The impressive numbers man wasn’t surprised about the depth of sentiment, saying voters “were waiting for a political party that protects the environment and looks after people”.

The ALP has launched a frenzied salvo in the inner north to paint themselves as the party of real action on the environment, distributing an eight-page tabloid The Richmond Report last week highlighting its plans to shut down 25% of the notorious Hazelwood power plant, as first reported by Crikey. And in an amusing pincer movement, Labor has also been marshalling the business community to place pressure on the Liberals to preference Labor in the city to reinstate the traditional Labor-Liberal duumvirate, as revealed yesterday by Mel Fyfe in The Sunday Age.

Yesterday, Ingram also expressed reservations about a minority Labor government with the Greens holding the balance of power, although his decision to abstain may mean the Greens’ hand could be strengthened in any coalition arrangement.

Meanwhile, the Greens continue to campaign hard on public transport, releasing a survey this morning claiming substantial discontent with the Brumby government’s performance in the inner north. Richmond candidate Kathleen Maltzahn said only 10% of respondents rated Labor’s handling of public transport as ‘good’ or ‘very good’, with over half saying the government was ‘poor’. Over half of the respondents also said their mode of transport was late at least once a week and 74% said the buck stopped with the government when it came to improving the system.

However Crikey spies immediately cast doubt on the survey’s randomness, with Brunswick candidate Cindi Dawes and an assistant seen walking past two professionally-dressed commuters and an elderly man with a walker to approach a woman with dreadlocks on the route 55 city-bound Union Square tram stop at about 9am on October 19.

The survey comes in the wake of last week’s controversy over letters sent to North Fitzroy residents claiming Labor wanted to build a six-lane freeway next to their houses, despite denials from VicRoads and local member Dick Wynne. And over in Northcote, held by right-wing ALP kingmaker Fiona Richardson by 8.5%, ugly spats have developed between fringe duck hunting activists and the sitting MP outside her electorate office.

*For previous Roy Morgan surveys rating the issues exercising voters’ minds during Victorian election season, see Crikey’s stories last week on crime and open and honest government and the economy. Stay tuned for more over the next few days…

I live just off Rushall Crescent and wrote to Kathleen Maltzahn to see what she was trying to achieve by suggesting a six lane road would be built. I asked whether it was to imply this was a Labor-endorsed trick, which it certainly seemed to be. I suggested if this a tactical mis-information campaign then they’d lose my vote; I haven’t had a response so can only assume she doesn’t care…