The payout stunt delivering a marketing bonanza to bookies

Bookies are rarely seen as charitable organisations, so any time they cough up early on a wager there could be reason for suspicion. Crikey examines the marketing stunt and increasingly pervasive nature of betting agencies.

Bookies are rarely seen as charitable organisations, so any time they cough up early on a wager there could be reason for suspicion.

But when online betting agency Sportsbet announced earlier this week it would pay out on unbackable Cox Plate favourite So You Think five days before the race was due to run, there was no catch. The horse was such a cert, said Sportsbet CEO Matthew Tripp, all bets placed before the announcement would be paid in full so punters could “enjoy their winnings early”.

Unsurprisingly, journalists jumped on the feel-good story. According to Media Monitors, 513 outlets gave the betting agency a plug. For a $250,000 ‘outlay’ (as Tripp says, it was likely they were going to pay out anyway), Sportsbet had generated thousands of dollars of free publicity.

Sportsbet is currently the only local gambling firm which pays out on future bets early and, according to Tripp, it’s part of a strategy to help drive turnover and generate interest in the brand. Tripp told Crikey that since the lifting of bookmakers advertising restrictions in 2008 there has been an “advertising land grab” amongst corporate bookies and that early payouts were a way of standing out from the crowd.

It’s no surprise that competition is heating up — online wagering is becoming big business. According to the 2010 Productivity Commission report into gambling, Australians spent $2.82 billion on horse and sport wagering in 2008/09. Of that, around $391 million went into online sports wagering — up 73% from 2004 levels.

It’s not the first time Sportsbet has made a premature pay out. Earlier this year the betting agency announced it would reward all Richmond wooden spoon bets after just four rounds of AFL competition. A late season charge saw Richmond finish 15th, one place above the hapless West Coast Eagles, and the online bookie took a $150,000 hit.

For Sportsbet, the fact that the early payout backfired wasn’t a big deal — by then most of the winnings had been reinvested and Richmond’s defiance simply meant they had made the news twice. Tripp says paying out early isn’t all about good PR, it’s to reward loyal customers as well.

South Australian Senator Nick Xenophon is not impressed. The noted anti-gambling campaigner is calling for a full-blown inquiry into gambling advertising, as well as the use of sign-up bonuses like free credit, telling Crikey the early payout indicates a “race to the bottom” by the gambling industry.

“Sportsbet is not in any way a philanthropic organisation, they are there to make a quid from punters. What they are doing now, it’s a cynical way of dealing with the proliferation of gambling advertising,” he said.

In the coming months Xenophon will join freshly-elected MP Andrew Wilkie on a new Parliamentary Joint Select Committee, which will advise the government on a response to the Productivity Commission report into gambling. Current figures estimate there are 115,00 problem gamblers in Australia, with the social cost of gambling believed to be at least $4.7 billion a year.

Sportsbet’s parent company, Irish betting agency Paddy Power (it owns 60% of Sportsbet), has been running the early payout stunt for years. Just this month it paid out early on Chinese dissident Liu Xiaobo’s Nobel Prize win, while in May punters collected on Tory bets in the UK election two days before the electorate went to the polls.

In an extra added touch, Paddy Power announced the news by plastering David Cameron’s face on the Houses of Parliament next to the words “we’ve paid out”. 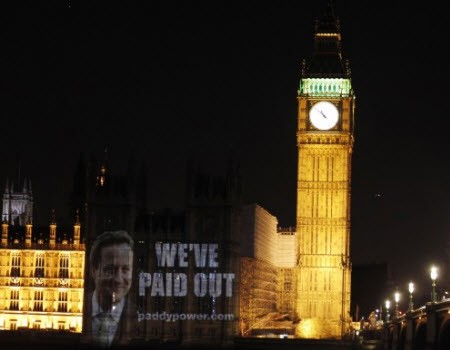 But it was the decision to pay out early on a Tiger Woods golfing major win last year which garnered Paddy Power the most attention. After just two rounds of the 2009 PGA Championship, Paddy Power announced it was paying out on all bets which had Woods to win. With the normally unflappable Woods holding a four-stroke lead, it was a sure bet. Alas, the raging favourite blew the lead, South Korea’s Y.E. Yang claimed a historic victory and Paddy Power handed out a 1.25 million pound bonus to punters. As Tripp noted, the agency wasn’t that fussed — the gaffe landed it worldwide exposure.

Paddy Power chief executive Patrick Kennedy has said that a willingness to pay out early has helped the bookmaker woo new punters. Last year it booked a pre-tax profit of 67.2 million euros — a figure which, despite an increased turnover of 2.75 billion euros, was down on previous years.

Matthew Tripp says Paddy Power is a “fun brand” and the cheekiness had rubbed off on Sportsbet: “While bookmaking is a serious business, we all need to take stock and realise we are betting on things we love. Let’s not take ourselves too seriously.”

Xenophon told Crikey broadcasters are “ramming” gambling down people’s throats and it will increase the likelihood of children becoming problem gamblers: “Having odds on live play on free-to-air television is a recipe for increasing the level of people being hooked, and that’s why there needs to be a complete overhaul of online gambling legislation in this country.”

Competition administrators also rely on gambling revenue — the NRL, FFA, AFL, Basketball Australia, Golf Australia, the F1 Grand Prix, MotoGP and the V8 Supercars are all sponsored by corporate bookmakers. Many sporting clubs have separate arrangements with bookies, and even the Stawell Athletics Club — organisers of the Stawell Gift — have a deal with the TAB. AFL grounds have started running live Betfair odds on the big screen during games.

What’s the cost to competition? The NRL was recently rocked by a string of betting scandals that involved players allegedly manipulating results, while the Pakistan cricket team has been investigated for potentially colluding with bookmakers.

But while Xenophon was scathing of the tactics of bookmakers, Tripp told Crikey he doesn’t believe early pay outs are in any way encouraging problem gamblers: “A lot will reinvest, which is great, it shows their loyalty to our company, but a lot will pull out and do whatever they want with the money, which is fine with us. I can’t see how it’s any different to backing a winner and reinvesting.”

Which of the big four banks will be first to ban credit card gambling?

Yes, I was surprised when I was at the footy last season and the frequent goading of supporters to gamble on this or that event. It was also quite distracting if one just wanted to watch the game.