Prepare for a do-nothing US Congress

Get ready for a spectacular couple of years of inactivity from next year.

Prepare for a do-nothing US Congress. If you thought the current United States political system was of the do-nothing variety despite the President’s party having a majority in both the House of Representatives and the Senate, then get ready for a spectacular couple of years of inactivity from next year.

The indications are that no party will be anywhere near control with the Democrat President Barack Obama saddled with a Republican majority House and his own team hanging on in the upper chamber with a bare majority.

The Iowa Electronic Market assesses the probabilities this way: 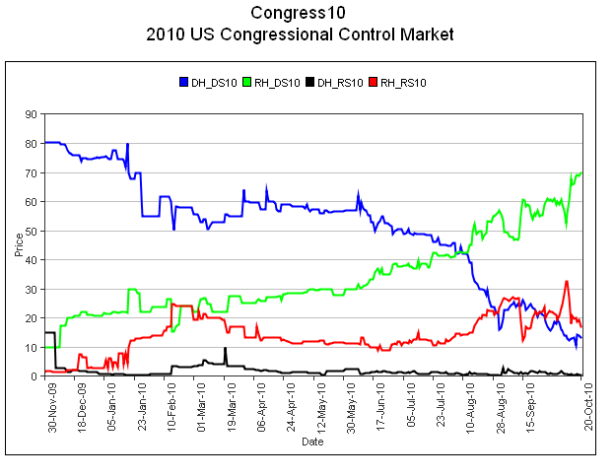 A round-up of other election news. In India’s Bihar State monkeys have emerged as a major election issue in two constituencies. The BBC reports more than 50,000 people in two assembly constituencies of the Saharsha area are affected by marauding monkeys stealing grain from stores and meals off kitchen tables.

The villagers are frustrated because the Wildlife Act prohibits them from killing monkeys, while state government officials are unable or unwilling to shoo them away. They are now chanting the slogan “Shoo away monkeys and get our vote… Only he who scares away monkeys gets our vote.”

In Brazil presidential candidate Jose Serra was hit on the head by an object while out campaigning in Rio de Janeiro ahead of the 31 October run-off vote. He blamed activists supporting Dilma Rousseff for the attack but officials from her Workers’ Party denied any involvement.

A report to the UN General Assembly on elections planned for Myanmar on 7 November has described the election process as remaining “deeply flawed.” There has been no release of political prisoners, and the high costs and limited time for registration have hampered political parties that are not backed by the government to organise themselves for the elections.

Power to the Greens — and it is not just in Australia. In Germany the party has a sporting chance, says Der Spiegel, of having the governor in two states after next year’s state elections. The opinion polls have the party doing well in the city-state of Berlin and in Baden-Württemberg.

A refreshing frankness. The Bank of England’s chief economist Spencer Dale talking overnight about economic conditions in his country:

“There are factors of this recession that we have never seen before and we have no idea how they may play out. We must be prepared to change our views as circumstances change.”

And then, for good measure, he warned about listening to anyone who does believe they know what will happen: “I would disregard them.”

I hope that makes you feel confident that the world is in the very best of hands. But never fear, in Australia we have jovial Joe Hockey looking out for our interests.

Canada grappling with the same immigration problem. Australia is not alone in struggling with how to cope with an influx of unwanted migrants. The Conservative Government this week proposed legislation setting out tougher penalties for those caught smuggling illegal migrants into the country.

The BBC World Service reports that the proposed law would sentence individuals illegally bringing more than 50 people into the country to a minimum of 10 years in jail.Migrants could face jail, have reduced health care access and be denied permanent residency under the law. 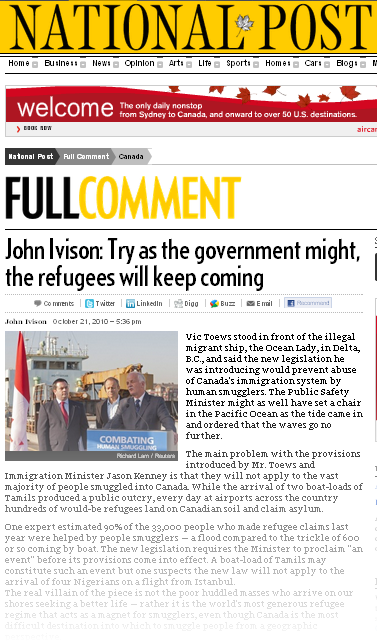