Memo to Vic gov: voters really do care about the economy

The Brumby government could benefit from widespread concern over the issue of economic management, with Roy Morgan research commissioned exclusively for Crikey revealing swathes of voters in marginal seats rate it a pressing issue.

The Brumby government could benefit from widespread concern over the issue of economic management, with Roy Morgan research commissioned exclusively for Crikey revealing swathes of voters in marginal seats rate it a pressing issue.

Forty-three per cent of swinging voters in the delicately poised ALP seats of Mordialloc and 37% in Burwood say fiscal rectitude is important, with the Liberal-held mortgage belt districts of Kilsyth (32.1%), Bayswater (31.5%) and Evelyn (30.6%) agreeing.

Big proportions of voters in other ALP seats that could fall to Ted Baillieu on November 27, including Forest Hill, Prahran and South Barwon, also said economic management was vital to securing their first preference at the polls. 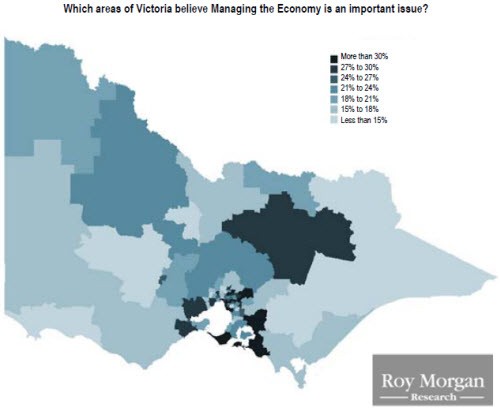 Victorian Premier John Brumby and Treasurer John Lenders have regularly bragged about keeping Victoria’s books out of the red, which according to insiders reflects a burning to desire to avoid a repeat of the early 1990s in which the Liberals successfully painted the Joan Kirner-led ALP as the ‘Guilty Party’ for its  flagrant fiscal mismanagement.

The issue continues to be a pressing one across the state with over 20% of voters in nearly two-thirds of Victoria’s 88 lower house electorates rating it highly. According to the Morgan data, the economy outpoints crime and open and honest government by a ratio of 2:1 and is seen as a cornerstone concern when convincing undecided electors to jump ship.

The issue has even percolated into post-materialist inner-city seats where the contest will be between Labor and the Greens. Significant minorities of voters in Richmond (25.9%), Melbourne (17.1%), Northcote (24.6%) and Brunswick (16.3%) indicated an abiding concern with balancing the books.

Morgan chief Gary Morgan told Crikey that “economic issues are always the top issue in the election and people are concerned about how the government is financially managing the economy … consumer confidence is an important variable”.

But Morgan said despite the government’s solid track record, the news wasn’t all good for the premier, with increases in taxes and charges also piquing voters’ concerns: “On a federal basis you have income tax but at a state level you’ve got state-based payroll tax, stamp duty and other taxes and charges… There is evidence they’re worried about the cost of electricity and increases in other costs such as public transport.”

Morgan said he and two others had travelled by taxi from East Melbourne to Wednesday night’s production of the musical Mary Poppins for $7 but on public transport it would have cost nearly twice as much.

But interestingly, just 6.8% of voters in Hong Lim’s ultra-safe protectorate of Clayton, which takes in a number of disadvantaged pockets and would be disproportionately affected by any increases in utility and public transport charges, rated the economy as a concern.

Attempting to shore up the government’s economic credentials, a spokesperson for Treasurer John Lenders told Crikey: “While Victoria currently has the strongest finances in the nation, we cannot withstand a Baillieu vote-buying spending spree, a $285 million mistake like Mr Baillieu made in 2006 or a $10.6 billion black hole like Tony Abbott produced at the federal election.” Baillieu’s office didn’t return calls.

Some commentators have suggested that many voters confuse their day-to-day debt struggles with a governmental obligation to do the same. Although restricted at state level, governments have the ability to increase taxes and pump-prime the economy to increase growth, a power denied to mortgagees when dealing with their own personal balance sheets.

Further intelligence on the countdown to the state poll is expected within the next week, when fresh Newspoll numbers are expected to be released. According to the latest Galaxy Poll, the two-party preferred vote in Victoria is sitting at 51-49 in favour of Labor, with a loss of 11 seats required for the government to lose its majority in the lower house.

Um, am I reading this map right? Surely it says that in the majority of places in Victoria fewer than 25% of voters think that “Managing the Economy is an important issue”. That is, three-quarters or more of voters think it’s not important. What am I missing?