Spot the golfing difference … vox pop of the day …

There was a toe-curlingly embarrassing segment on the Today show this morning, when footage of 'Adam Scott' instead showed Australian rival Aaron Baddeley, plus other media news of the day.

Scott and Baddeley: spot the difference. There was a toe-curlingly embarrassing segment on the Today show this morning when Adam Scott was interviewed in the studio by Karl Stefanovic about his very worthy Adam Scott Foundation. The producers managed to show a large graphic of Adam swinging a golf club left-handed (they must have gone out of their way to reverse a photo of him in action). 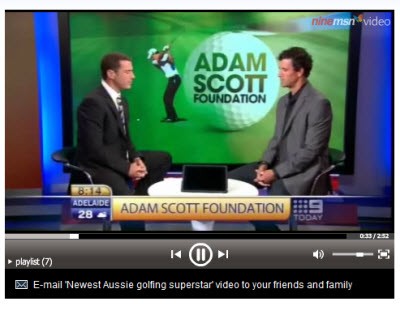 They then followed it up by running video footage of Australian rival Aaron Baddeley instead of the Queenslander. Host Stefanovic tried valiantly to smooth over the mistakes, and Scott himself took the cock-ups very graciously, but you have to wonder if bums were kicked around the studio in the next ad break. — a Crikey reader

Vox pop of the day. There’s nothing like a bit of false bravado, especially when it involves a shark bite being fixed with a Band-Aid…

“Rupert Murdoch threw his support behind the coalition government tonight, applauding its tough approach to cutting the budget deficit and praising David Cameron… The News Corp chairman was delivering the inaugural Baroness Thatcher lecture at Lancaster House in London to an audience of 200 invited guests.” — The Guardian

Could Nick Falloon get boned by a Packer twice?

“Could Nick Falloon become one of the few people to be boned by the Packer family twice? It is a question worth asking after the Ten executive chairman effectively drew a line in the sand at yesterday’s annual results briefing ahead of a meeting with James Packer.” — The Australian

Middle Earth on the move in Hobbit dispute

“Warner Brothers have confirmed that they are considering alternative locations in which to film the two Hobbit films. The production company’s spokesperson Candice McDonough refuted reports the boycott of the films by NZ Actor’s Equity and other unions had been lifted days ago and that the studio had asked for the delay of the announcement.” — New Zealand Herald

“Enough with the delays, New Matilda is back online. So how is the new arrangement going to work? Read on for more…” — New Matilda