As the Gold Coast spiv community struggles to rev-up the hyperbole ahead of the Gold Coast 600 V8 race this weekend, the biggest story of all appears to have been ignored by the glitter strip's sole daily newspaper.

As the Gold Coast spiv community revs up the hyperbole ahead of the Gold Coast 600 V8 race this weekend, the biggest story of all appears to have been ignored by the glitter strip’s sole daily newspaper.

On Wednesday night, Channel Nine news led with a seemingly irresistible spat between rival grid girls, after GC600 organisers banned the popular Miss Indy pageant from the bitumen now occupied by rival models competing in the Miss V8 Supercar event. The Indy girls have been a popular feature of the Gold Coast racing scene for 20 years, but their race’s demise two years ago has left the flesh fest out on a limb.

The story was followed up with a vengeance in yesterday’s Courier Mail, which plastered the “turf war” all over its front page, featuring caged girls posing behind metal race barriers and Indy organiser Roscoe Dickinson appearing grim faced in front of his stiletto-wearing charges.

Reigning Miss Indy Ashleigh Sudholz said it was “a shame” finalists were banned from pit lane, telling the newspaper her crew were “way hotter”. 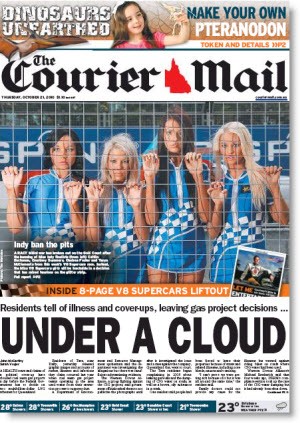 It was just the sort of story that would have normally had Bulletin editor Dean Gould rubbing his keyboard with glee. But it was not to be. Instead, the paper splashed with a picture of semi-retired veteran Mark Skaife’s “dummy’s guide” to the GC600 track and a photo of the V8 girls’ pre-judging photo shoot. Their disenfranchised Indy rivals were nowhere to be seen.

In fact, as the event’s major media partner, the tabloid has been avoiding Supercar controversy all year, culminating in stories sledging the Air Force for not agreeing to a flyover, an uncritical assessment of race supremo Tony Cochrane’s crowd estimates and an editorial this morning lauding “a feeling around town that something big is about to happen”. It crowned its coverage with a “GC600 race and party guide” (check out the paper’s landing page for more). A key spruiker for the race, Gold Coast eminence grise Brett ‘Crusher’ Murray, who runs race PR through his firm BAM Media, is also a regular columnist for the paper. On Wednesday, Murray, with a disclaimer attached, went into bat for the “original group of entrepreneurs prepared to ‘have a crack’” to get the race up and running.

And as Crikey revealed in June, spin doctor Graham Staerk was also lobbying governments for the race at the same time he was spruiking it without disclosure in the Bulletin (Staerk, who added a disclosure to his column following our queries, temporarily disappeared from the paper’s pages before being reinstated).

Bulletin insiders say Murray and Staerk remain close friends with Gould — who did not respond to Crikey by deadline — and the duo exert “a degree of influence” over the paper’s news focus.

Who exactly is responsible for keeping theme parks safe?

ROTFL The Australian must have missed crikey’s deadline and will be utterly gutted that they didn’t win this weeks Wankely for their *epic* unhinging over the NBN.

I’d stick a link in, but it would only get stuck in moderation.
Just google
NBN WATCH. How your millions are being spent and you’ll get the drift. 😀

As for Miss V8 Supercar and Miss Indy, surely this is a joke. One would expect to find Sam Newman’s acolytes at this ignoble event, eyeing off the caged gals from the ‘right’ side of the wire. How depressing it all is.

I await the Warwick Capper follow up with interest.

the racing is so boring, about as exciting as watching traffic on a highway. most exciting of all are the pitstops for the TV viewers