Internal ALP enemies of Victorian Maritime Union state secretary and Trades Hall president Kevin Bracken are egging him on to further greatness after he reprised his considered theories on the 9-11 attacks on Melbourne radio this morning.

Internal ALP enemies of Victorian Maritime Union state secretary Kevin Bracken are egging him on to further greatness after he reprised his considered 9-11 theories on Melbourne radio this morning.

ABC 774 Mornings host Jon Faine’s production team was gobsmacked by Bracken’s decision to again hit the airwaves at 6:08am Perth time (the union leader is in Western Australia all this week for the MUA’s National Council) to accuse the US government of covering up the attacks on the twin towers and the Pentagon nine years ago.

One ALP Right source told Crikey that the rebel Left-aligned Bracken was doing “excellent work”. “We look forward to more interventions over the rest of the week,” they said.

But another source from the section of the divided ALP Right notionally supportive of Bracken’s fraction was scathing: “The only people who’re surprised by this are people who don’t know Kevin Bracken. He might well be a good bloke 99% of the time, but so was Ted Bundy. It’s what you do in the 1% that counts … this bloke makes Bill Hartley look reasonable. He’s the best thing the Right has going for it since Bill Landeryou.

“The fact that we have to deal with this lunatic is a sad reflection on where the labour movement is currently at. He’s depriving a village somewhere of an idiot; if his members want to go on funding his investigations into the grassy knoll and new designs for tin-foil hats, that’s fine, but personally I’m sick of dealing with him and the results of his obvious mental illness.”

Bracken, who is also president of the Victorian Trades Hall Council, again challenged Faine to “debate” the attacks this morning (download the audio of the conversation here):

“I just want to state the official theory as to what happened on September 11 doesn’t stand up to scientific scrutiny. That’s a fact … Jon, unfortunately, cowards like yourself have set the political agenda in this country for too long.”

Yesterday the union heavy claimed airline jet fuel “wasn’t hot enough to melt steel” and that the twin towers were “imploded”, a familiar claim made in polemics such as the notorious Loose Change, but comprehensively refuted by actual scientists.

Bracken had support from at least one caller on Faine’s program this morning. A women claimed that Osama bin Laden wasn’t even on the FBI most-wanted list; when Faine refuted this saying he had the list in front of him, the caller barked “well I’m sorry, I don’t have the ABC’s resources at my disposal” and hung up.

After Bracken’s comments yesterday, the global media pounced, with the UK Telegraph and the Hindustan Times running big on the views of “a senior member of the Australian trade union movement”. 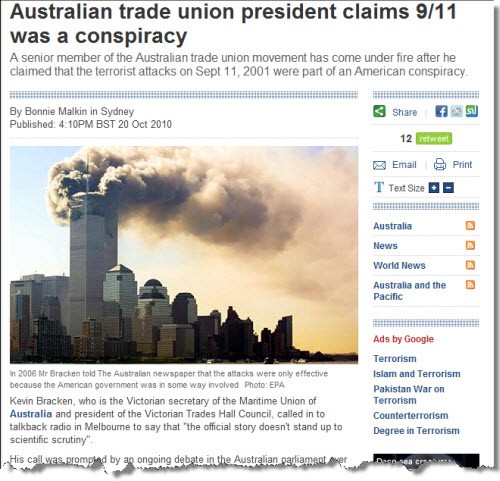 The Coalition is also rubbing its hands with glee, launching a question-time sortie yesterday to attack the Prime Minister over her former factional colleague’s views and highlighting his committed membership of Labor’s Port Melbourne branch. Bracken’s take on the tragedy, which were first aired in The Australian in 2006, have also flushed out a motley bunch of Crikey commenters, who also say a vast conspiracy implicating former US President George W Bush is on the verge of being unmasked.

Dishonour and betrayal? Labor fight for Gillard seat hots up

I congratulate Kevin Bracken for his courage. Those who question the official version of 9/11 events include physicists, pilots, eye witness workers, fireman, policeman and experienced senior figures from US military and intelligence. It is a matter of public record that members of the 9/11 commission either resigned or publicly expressed their frustration with the lack of co-operation, funding and resources.

On any level there is absolutely nothing extremist in questioning the official “conspiracy”
Indeed, it is only in Anglo countries, such as ours, where it is considered extreme to question the official version of events.

Any cursory view, clearly raises serious issues concerning the official story. This does not necessarily mean that 9/11 was an inside job. It may well be that the US intelligence were too embarrassed to admit they had no idea who did it and just went with their best guess.

Whatever the truth may be, the only thing we can know for certain is that the official story is not it.

The so-called “official version of 9/11 events” never seems to get a play on free to air TV. It may be because American audiences are too sensitive or squeamish or something but there seems to be a complete absence of documentary record in the public arena.
Instead there are innumerable DVDs of exquisite conspiracy theories which peddle all kinds of (what I take to be) crap, with phoney ‘evidence’, phoney ‘science’ and nicely presented bullshit. Is it any wonder that dull but otherwise unexceptional, ordinary people get sucked in by this stuff. The subject is avoided by ordinary media as if it is a no-go zone.

Am I alone in thinking it odd
That our very sane Prime Minister,
Who does not believe there is a God,
Be asked to publicly administer
Reproof to a trade union official
Who believes ‘9/11’ was a conspiracy.
If true that could be prejudicial
To the cause of our democracy
And of America with whose troops
We’re fighting a long and bloody war.
It could well mean we all are dupes
And it’s a lie our sons are dying for.
His view was challenged in our Parliament
In a question from the Opposition
On his right to voice such strong dissent.
This is coming from a Coalition
Whose leader has described as ‘crap’
Worldwide consensus on climate science!
He opposes policies to solve the weather trap
With what many see as ignorant defiance.
He also has faith in the beatitude
Of a newly ordained Australian saint.
Many do not share his attitude
Of reverence and think his faith is quaint.
Thank God, I say, he is not our national
Leader on this matter to express a view,
But rather it is a woman who is rational
Enough to question if that belief is true.
That she disagrees with it she has affirmed.
The right to hold that view she has forthrightly confirmed.

Conspiracy theories make great reading, but it’s a lot harder to keep straight which of the hundreds of elements are possible and which are either risible or outright lies. The trouble is that if you find just two or three plausible, you tend to get overwhelmed by the rest of them and think by sheer weight of numbers “there must be something in it”. There have been millions of words written in the name of 9/11 Truth, but most are as much fiction as Harry Potter is.

Yes, there were spies who warned of exactly the WTC attack prior to it happening. There was a great article in The Age yesterday by a couple of them who could quite clearly see the oversight was due to incompetence or inertia and not conspiracy. Of course there would have been warnings of thousands of other scenarios which did not happen …

Attitudes like Jon Faine’s unfortunately haven’t helped, and I was a keen listener to his show for the last two days. Faine is my favourite presenter, but something goes wrong with his presentation when he is facing someone like Bracken or today’s supporters. He comes across as condescending and ends up sparking more people to react because they see him as part of the cover-up (seriously, the Herald Sun got 45% of respondents saying it’s worth debating!). Telling someone “you are wrong” and “you are crazy” and “your attitude is damaging our democracy” is just pouring fuel on the fire. He did try referring to some of the better rebuttal sites out there, but I think the approach after the first caller should be not to give it any more oxygen. Politely say there are more important things to discuss, tell them to engage in online debate, whatever. Then change the subject.

Sure, when you have a few hours, read the alternative story of 9/11 with an open and critical mind. Ask others to do the same. Then have a think about how unlikely it is that such a big conspiracy has no whistle-blowers, no actual physical evidence at all, and a large cohort of earnestly neutral engineers and scientists with a logical explanation for the lot. And move on.

I can only support the statement by Victorian Maritime Union Secretary Mr. Kevin Bracken. Our politicians are telling not the truth about 9/11. Nano-Termite was discovered in the dust from the crashed buildings and only Nano-Termite was able to make steal melting. However Nano-Termite is produced under high security in CIA-laborities and not in caves in Afghanistan. How could Bin Laden? and Al Quada have gotten Nano-Termite into their possession?