Walkley back-slapping … is the Globe for sale? …

Walkley Award nominations are less about the journalists recognised and more about the crowing self-congratulations from media companies. Plus Tow Cowie, and our new favourite newspaper...

Let the back-slapping begin… The announcement of the Walkley Award nominations are less about the journalists and media professionals recognised — and a deserved congratulations to you all — and more about the crowing self-congratulations from media companies the morning after. Fairfax titles the Sydney Morning Herald and The Age “dominates”, they trumpeted this morning, while The Australian and News’ metro tabloids congratulated their nominees. Even Aunty got in on the act, with its journos “reaching the finals in 14 of 31 categories”. 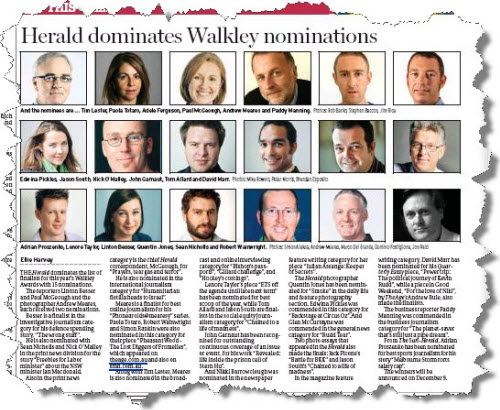 How now, Tow Cow? Our colleague Tom Cowie thought he’d finally made it. There was the celebrated Tom Wants a Job project, which drew international attention and helped land him the prized job of Crikey gumshoe. Then The Walkley Magazine — the industry bible, no less — asked him to document the journey.

But as the edition was mailed to thousands of journos across the country a horrible mistake was revealed — Tom Cowie had become “Tow Cowie” on the cover. Editors are apologetic. We’re eternally thankful … — Jason Whittaker Derek the angry dugong watch: Also from the Gazette, your weekly “horrorscopes” from everyone’s favourite cranky seagoing mammal. A hilarious read (click through for a readable version) …

Is The Boston Globe for sale?

“A Boston-area investment group has announced that it wants to buy The Boston Globe, along with Boston.com and The Worcester Telegram & Gazette in Massachusetts, from The New York Times Company.” — New York Times

The good news in South Africa: the editor quit

“The launch of a pro-government newspaper in South Africa today was postponed when the editor and four senior staff quit hours before the first issue was due to go to press. The New Age has promised ‘more positive’ news and to highlight the achievements of the governing African National Congress (ANC).” — The Guardian

“Video journalists Yalda Hakim and Mark Davis will host Dateline for SBS next year, when George Negus exits the show for his new role at TEN.” — TV Tonight

Zuckerberg responds: at least they got my clothes right

“Facebook founder Mark Zuckerberg has hit back at the soon-to-be released movie The Social Network, accusing the filmmakers of misrepresenting his motives and the culture of Silicon Valley.” — Sydney Morning Herald