There is no evidence I have seen that suggests that fighting the Taliban in Afghanistan has lessened the danger of terrorism.

Why just Afghanistan? If Afghanistan was the only place in the world where militant Muslims could train terrorists the speeches yesterday by Prime Minister Julia Gillard and Opposition Leader Tony Abbott could be said to have been quite sensible.

Stopping madly religious bombers from causing death and destruction as at the New York Trade Centre or in Bali is a proper function of government. Unfortunately there is nothing special about Afghanistan except that Osama Bin Laden made that country his training camp of choice.

As military action by western nations has meant fighting an actual war has limited the opportunities for training outsiders, the militants have moved their training elsewhere. Yemen, the Horn of Africa, northern Africa, Pakistan and, I read this morning, Kyrgyzstan have replaced Afghanistan as the favoured locations.

There is no evidence I have seen that suggests that fighting the Taliban has lessened the danger. So if we accept the argument of the leaders of Australia’s major political parties that our troops are engaged in a fight to wipe out terrorism why are we not supporting an extension of combat to the places where it is now being fostered?

Toss a coin and take your pick. Melbourne Cup Day will be an even money bet according to the Crikey Interest Rate Indicator. The market cannot split a no change decision by the Reserve Bank Board and an increase of 0.25 percentage points in the official rate. 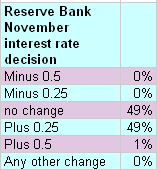 I notice that this morning one of the previously interest rate hawkish economists is now moving to the side of the no increase doves.

According to Westpac Chief Economist Bill Evans, the decision by the Board to hold rates steady in October surprised him:

“Recognition is given to the impact of the high Australian dollar to the inflation outlook. A less confident tone is adopted on both business investment and household spending. Overall we assess that despite the ongoing message that at some time rates will be rising they are now likely to be on hold until February.”

Unless there is something quite surprising in the consumer price index figures due out next Wednesday and inflation is unexpectedly shown to be increasing, I expect the newly dovish Mr Evans to be right. I for one am backing the no rise option.

The US banking problems continue to grow. Bloomberg reports this morning that Pacific Investment Management Co, BlackRock Inc and the Federal Reserve Bank of New York are seeking to force Bank of America Corp to repurchase soured mortgages packaged into $47 billion of bonds by its Countrywide Financial Corp unit.

The New York Fed acquired mortgage debt through its 2008 rescues of Bear Stearns and American International Group Inc. The shoddy management of the packaging of so-called “securitised” loans has the potential to disrupt again the American banking industry.

As if that was not enough bad news, commercial real estate prices (as measured by Moody’s/REAL All Property Type Aggregate Index) fell over 10% over the last three months. The index is now down 45.1% from the peak in October 2007 and at a new cycle low — the lowest prices since 2002. 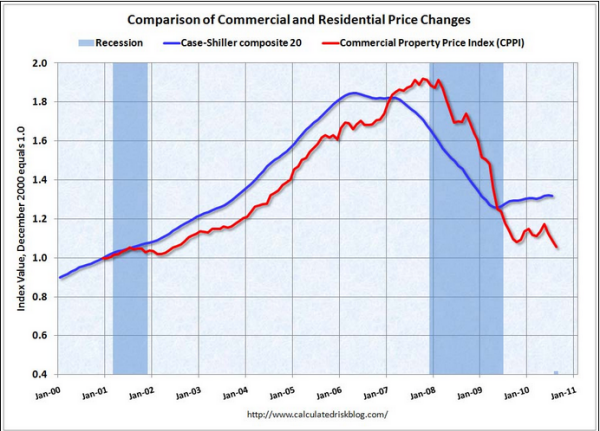 Sure they’ve spread out their franchise, including just over the border in Pakistan, training (and they’re our “friends”, so we won’t “Iraq ‘n Roll” or “Afghanistand” there) – but they wouldn’t dare come back to Afghanistan – not til we’ve pulled out?

Why just Afghanistan, why Afghanistan at all, do people really believe, that supporting the Yanks, will make us safer?.
They have a history of betrayal, they would only come to our aid, if it suited them, we always seem to be involved, in helping them, fighting un winnable wars, that they started and messed up.
Big Julie seems to want to stay the distance, may I suggest that she sends her bedfellow, Tim whatsesname over for a tour, he needn’t fight, but could cut the hair of the wounded in hospital, when and if he returns she would get the real picture