Rundle’s mid-terms: O’Donnell an embarrassment to the Tea Party, and its utter essence

Delaware, it turns out, is a paradoxical place. To the outside world, its distinct image is precisely nil. Within Delaware, it has a sense of identity so intense as to near-exclude discussion of anything else.

Down at the south corner of Wilmington, Delaware, the old Amtrak station is being restored, its beaux art roof tiles, and arches swathed in scaffolding, itself swathed in billboards announcing the government funds going into it. This is Joe Biden’s old station, the place he got off at each evening throughout his Senate career. His wife had died, and he was raising his boys alone, so he decided to keep them in their hometown. That entailed three hours of commuting a day in elegant expansively accoutered trains, but Joe made it sound like the opening of the West every evening.

Wilmington’s at the very top of Delaware, where it joins Pennsylvania, of which it was once a part. 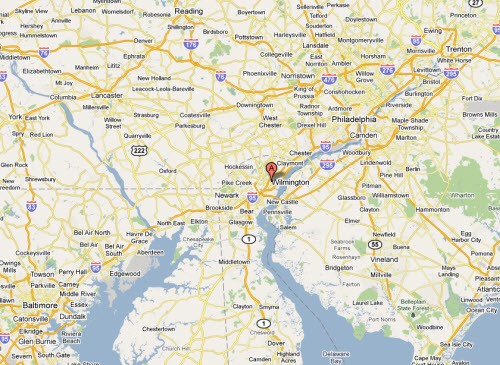 Late afternoon on a weekday, it has the feel of most America downtowns now, like it was suddenly, effectively, ethnically cleansed, leaving only those either too poor or too mad to bother with. Part of the city has been replaced with convention centres, multi-storey car parks and instahotels, silent and funereal in the late winter sun. The other part, old Victorian row shops and art deco piles, has survived so long that it’s come out the other side of modernity.

Block by block they’re being done up, making a chi-chi city of the future. But it’s for people who have not yet arrived, it is being prepared for the next wave. The old Wilmington, entire of itself, first city of a plantation state, is dying, and an ‘undiscovered gem’ of the future is being born, for priced-out Pennsylvanians.

“Yeah I couldn’t I couldn’t go back to Philly. I’ll never go back.” Earl, a chef at the Renaissance Hotel, is striding back and forth telling me his life story, like all chefs, brimming with enthusiasm and prescription codeine. He works twelve hour shifts, sometimes fourteen, “back to backs” — i.e. with four hours sleep in between — and “love it man, I love it. And I love Delaware”.

Does he think of himself now as a Delawarean? “Man uh … no. I’m not a Delawarean. They got a different way of doing things.” He is not the first person here to tell me this. He is not even the tenth.

Delaware, it turns out, is a paradoxical place. To the outside world, its distinct image is precisely nil. Within Delaware, it has a sense of identity so intense as to near-exclude discussion of anything else. Thriving for a century before the revolution came along, it seems barely disturbed by it, even though it takes pride in being the first state to sign both the Declaration of Independence and the Constitution. The colonial houses of Dover appear to have never been troubled by crisis, despite being on the front line of the Civil War. Everything proceeded much as it ever has.

Perhaps that explains the different way of doing things. Perhaps it explains Christine O’Donnell, who has made the news again by revealing that she does not know the contents of the first amendment, or indeed any of the others. “So you’re telling me . . . that the phrase ‘separation of church and state’ is found in the First Amendment?” she said in a debate at a law school, the wide laughter suggesting she may have taken the know-nothing act too far. Or has she?

For anyone wanting to take the Tea Party as no more than a combination of performance art and abnormal psychology, Christine’s your gal. The bubbly slightly kooky Jersey gal, latterly transformed into a Sarah Palin Gucci-knockoff made her way through the state primary for Republican candidate to contest Biden’s vacated seat, with the help of a small but committed group of insurgents and out-of-state supporters, out of the various and rapidly pullulating groups on the right side of the net.

She appeared to come from nowhere, but it was in fact her third try. Indeed, she’d actually been the Republican candidate for the Senate in 2006 — simply because no-one else was willing to go up against Biden, a god in the state, for reasons fair and foul. By that time, she had had several lifetimes. As would later become well-known, she was a soundbite pundit on Bill Maher’s Politically Incorrect late night show, a place with a constant demand for right-wingers who can play up and play the game.

It was there she revealed, in that peekaboo way, that she had dabbled in witchcraft, and “one of my first dates with a witch was on a satanic altar” — and hell, what gal bored like hell in Jersey hasn’t? She went on to a start a degree in acting from an old Jersey liberal arts college rechristened as a university. She would later claim to have attended Oxford, after doing a week-long training course in the town of Oxford, not to mention a fraudulent claim to the distinguished Claremont University.

But when she quit the one actual degree she did do, it was after a religious-political revelation on seeing high-res abortion pictures. Born a Catholic, she became a fundamentalist, before returning to Catholicism, and then saying she follows both. She became part of the rich Republican undergrowth, in California and transferred to Delaware when she took a job with the ultra-conservative Intercollegiate Studies Institute, which formally states that men should have precedence and authority over women. She then took the Institute to court for discriminating against her as a woman, had her house repossessed, and entered a decade of running in primaries and living off the public funds accruing from it.

She believes m-sturbation is adultery, that Darwinism is a myth, and believes that the families of pregnant women who may die in childbirth should choose whether to save the child’s life through birth or the mother’s through abortion. She practiced abstinence in her 20s, though she appeared on the MTV documentary series S-x in the 90s at the time.

She is, in other words, a true product of the culture, of the maze of placeless suburbs, basic cable and outlet malls that the states of her birth now live beneath. She never completed the acting course, because she is still in, taking on the shape of whoever last crossed her path. She is the last of small-town Americana drip-fed through eighties Californication. She is what Robert Hughes, speaking of Andy Warhol’s Factory-era retinue once called “cultural space-debris”.

As such, she is both an embarrassment to the Tea Party, and its utter essence, people floating around in nowheresville, wondering where their country went, and their purpose with it, and finding it in notions of exceptionalism and providence. The mood is catching, an exuberance in the Tea Partiers touching on the manic. In Reno on Monday, launching another cross-country bus, Sarah Palin turned her hard-bop poetry-slam speechifying onto the Republican establishment “heaven forbid that the GOP machine strays from this message,” she said, “if so, the GOP is through.”

Alaskan Tea Partier Joe Miller had his private security detail — consisting of moonlighting serving soldiers — handcuff a persistent journalist, after having given a speech in which he praised East Germany as a model of border protection. The Republican candidate for New York governor Carl Paladino, believes gays should be banned from teaching, but circulates clips from bestiality porn. The Iowa Republican Party asserts as the first plank of its manifesto that it believes in, and I quote “life, liberty and the right to property (pursuit of happiness)”, thus rewriting the document from which they claim foundation and meaning, just as FOX news tries to deny the separation of church and state.

But it is O’Donnell who has reached a state of know-nothingism that can only be described as homoeopathic — through dilution, no trace of an idea remains, only the impression it left, just as she is nothing other than the impression others have left on her. Watching the grainy footage on TV is a wonder to behold. She returns to the topic, over and over, giving Democrats Senate Candidate for Delaware Chris Coons no alternative but to speak to her like a dull student in their debate:

This is either guile beyond measure, forcing the wonkish, bookish Coons to talk all teacherly, or it is simple absence, a sign that she is nothing more than a serial public-funding grifter, and a terminal attention whore (to quote Diablo Cody’s self-description). Her mother is on the payroll, she’s charged shopping sprees to the public purse, and left campaigns hanging with unpaid wages and tens of thousands in debt.

Like Sarah Palin’s embarrassing snowbilly family, she has mistaken the party primary process for audience selection in The Price is Right.

Others may win for any number of reasons. If O’Donnell does it can safely be assumed that Americans have abandoned any notion that they should choose a candidate who must actually act in the world, based on reflection, and have chosen instead a mere image of an image. In this cavernous room of a bunker hotel in a deadened city, it is easy to see what people want from someone like O’Donnell: to body forth the era when a place like Wilmington had its own newspaper, a real newspaper, taverns, politics, teeming streets, and life was the negotiation of certainties not questions, and once the Constitution was signed, it damn well stayed signed. But they also want the mall and the satanic altar, the Jersey Shore and Jersey Shore. Earl bustles through again as he has throughout the afternoon, a dynamo spinning to no purpose.

[O’Donnell who has reached a state of know-nothingism that can only be described as homoeopathic]
Bloody hell Rundle. When you’re good, you’re gold! 🙂

Great piece, Guy congratulations – even if I don’t understand the reference to the “late winter sun” in paragraph 2. These people are mad. It makes me shudder at the foreign policy adventures we’ll slavishly follow in a fervently bi-partisan way in 2013 when Sarah Palin gets the top job.

It is of course, a terrific piece, but it sure depresses me. Liquid modernity just before it vaporises …