Detective Senior Constable Simon Artz of the Victoria Police appeared briefly in the Melbourne Magistrates Court this morning, facing charges of leaking details of the anti-terrorism Operation Neath to The Australian's senior journalist Cameron Stewart. Plus, what's Facebook when you tap phones?

Oz leaks case “extensive”. Detective Senior Constable Simon Artz of the Victoria Police appeared briefly in the Melbourne Magistrates Court this morning, facing charges of leaking details of the anti-terrorism Operation Neath to The Australian‘s senior journalist Cameron Stewart. The court heard that the brief of evidence against Artz was “extensive” and includes 49 witnesses.

The case, being prosecuted by the Victorian Office of Police Integrity, is the end game in the so-called Oz Leaks affair, in which The Australian has engaged in a murky, high-stakes legal and journalistic campaign against the OPI, including Federal Court action in an attempt to prevent evidence becoming public. The Magistrate yesterday declined media applications for access to the brief of evidence in the case, releasing only the charge sheet.

Artz faces eight charges: five of leaking to Stewart, two of misleading the OPI, and one of hindering police by submitting a false information report regarding his contact with Stewart. The case was adjourned until  November 16. — Margaret Simons

What’s Facebook when you tap phones? The Wall Street Journal splashed its Monday print edition with a big headline screaming ‘Facebook in Privacy Breach’, which has already been rebutted as a beat-up of old material by a Washington Post blogger. Facebook, which rendered News Corporation’s $600 million investment in My Space virtually worthless, is clearly not flavour of the month with Rupert Murdoch at the moment, who is listed on p19 of the Journal as “chairman”.

Strangely, such concerns about privacy have not been extended to victims of the News Corp’s phone-hacking scandal in the UK where codes were illegally obtained for the purposes of accessing the voice mail accounts of dozens of people, including Royals, MPs and sports stars. Despite far more evidence from a range of sources than anything that can be mustered against Facebook, the Sun King insists his UK tabloids had one isolated incident of phone hacking five years ago by a reporter who was summarily sacked and sent to prison. — Stephen Mayne 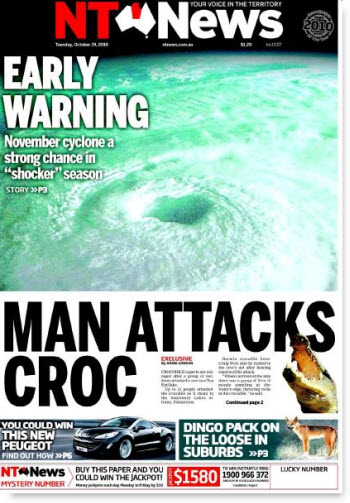 Does anyone wake up with Today?

“That’s the embarrassing question producers of Nine’s breakfast show will be asking themselves after a prize incentive for watching the program went unclaimed for the fifth day running.” — Herald Sun

Newsweek calls off its Beastly marriage

“Is one media company big enough for Barry Diller, Tina Brown and Sidney Harman? Apparently not. After weeks of talks between The Daily Beast and Newsweek about a partnership, and much speculation in the media — would they or wouldn’t they? — the union is not to be.” — New York Times

No Myth: Obama will blow things up on telly

“US President Barack Obama will appear next month on Mythbusters, a television series that uses science to investigate popular myths.” — Reuters

“There may be no better time to look behind the scenes at American journalism. Many believe writers, reporters and editors write stories in such a way as to further their own political views.” — Huffington Post

“A columnist for the Reuters Breakingviews comment website has resigned while multiple breaches of its code of conduct on disclosure of financial interests and cases involving other commentators are being investigated, Thomson Reuters admitted today.” — The Guardian

We love our iPads, the survey shows

“More than a quarter of a million Australians are using Apple’s iPad, a survey shows, but it has not yet taken off as a mass news medium. Analyst group Telsyte surveyed about 1000 consumers across all age groups and found that 300,000 tablet computers had been sold in Australia by the end of last month — almost all of them iPads.” — The Australian

NT News Watch: have they ever done ‘Man Bites Croc’?