When does the spin stop?

When the five mainland capital city Murdoch Sunday newspapers run their own state based version of the same story it's fair enough to call it a fair dinkum News Limited campaign.

Don’t blame the PR spinners — the people who help journalists con you. When the five mainland capital city Murdoch Sunday newspapers run their own state based version of the same story it’s fair enough to call it a fair dinkum News Limited campaign.

So we can expect to read more about the danger to democracy from the continued growth of the public relations arms of governments. Spinning, the Sundays assure us, costs taxpayers across the nation at least $250 million a year with federal, state and territory governments employing 3000 media advisers. 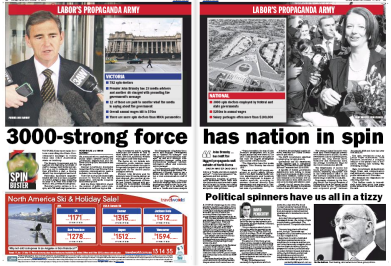 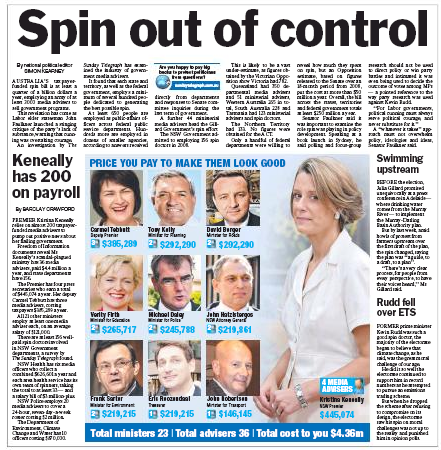 The main aim of this propaganda army, thundered the Herald Sun editorial, was to attempt to control the message that voters hear. “Political spin is just propaganda and manipulation by another name.”

What was not acknowledged by the editorial writer was that public relations practitioners can only succeed with their black arts if the media lets them. Without journalists aiding and abetting spin, whether of the government inspired or any other kind, it would simply disappear into the ether.

That it doesn’t disappear, but is in truth the staple diet of a complacent media, was shown by research findings published earlier this year. 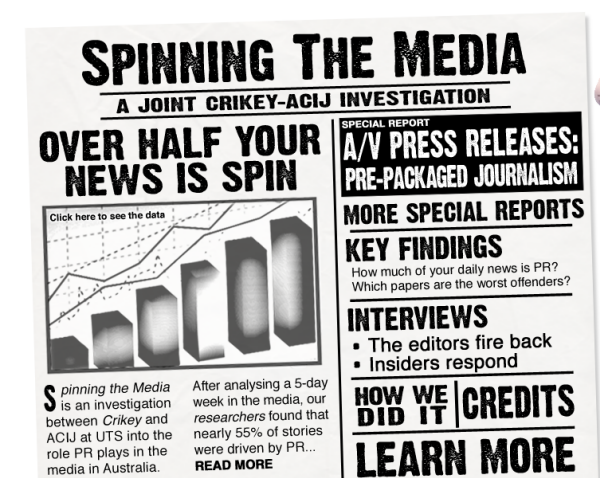 This was the introduction to that Crikey report:

Today Crikey launches an investigation six months in the making. Spinning the Media is an investigation in conjunction with the University of Technology (UTS) Sydney into the role PR plays in making the media.

Under UTS’ Australian Centre for Independent Journalism (ACIJ) head Wendy Bacon (a Walkley Award-winning investigative journalist herself…) more than 40 students have got up close and personal with the sticky end of the spin cycle. They’ve had to analyse, critique, question and then pick up the phone to ask the hard questions of the media and its reliance on public relations to drive news.

Hard questions, because this is what came out in the wash: after analysing a five-day working week in the media, across 10 hard-copy papers, ACIJ and Crikey found that nearly 55% of stories analysed were driven by some form of public relations. The Daily Telegraph came out on top of the league ladder with 70% of stories analysed triggered by public relations. The Sydney Morning Herald gets the wooden spoon with (only) 42% PR-driven stories for that week.

The whole Spinning the Media series is well worth a read but this couple of tables from it give the flavour of why this Murdoch Sunday tabloid campaign rings just a little bit hollow. 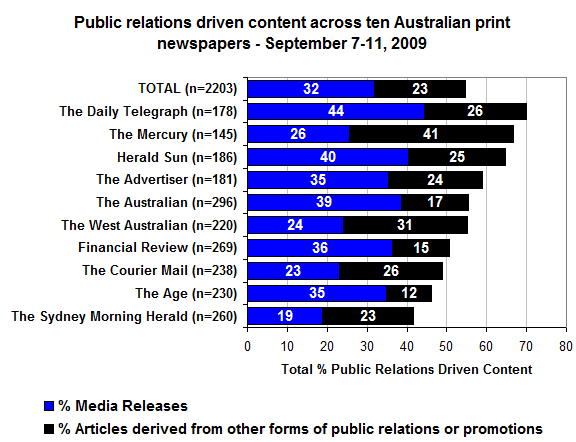 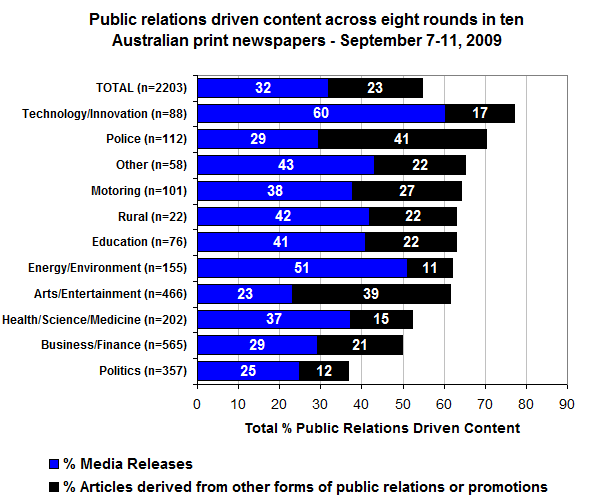 Homer Simpson: The next Catholic saint? The Simpsons remain among the few TV programs for children in which the Christian faith, religion and the question of God are recurring themes. Who says so?

Homer and Bart have made this week’s issue of the official Vatican newspaper with quite a glowing review taken from “The Catholic Civilization” – the influential Italian Jesuit magazine.

Italian is not my strong suit so the following automatic Google translation leaves a little to be desired but you will get the point.

Few people know this, and he does everything to hide it. But it’s true: Homer J. Simpson is Catholic. And if it was not a vocation — a blinding accomplice pint of “Duff” — we missed very little. So much so that today the king of donuts in Springfield does not hesitate to exclaim that “Catholicism is legendary.” But then change their minds in a cathartic “D’oh!”.

The joke— is the episode “Father, Son and Spirit Practical,” in which Homer and Bart are converted through an encounter with the friendly father Sean — is the starting point of the interesting article in The Simpsons and religion of father Francis appeared Occhetta in the latest edition of “The Catholic Civilization.” The influential Italian Jesuit magazine draws a fine ethical and anthropological analysis of the cartoon at the same time seizing the opportunity – this is the most important – to give some practical advice to parents and children.

It is undisputed that the series created by Matt Groening brought into the world of cartoon language and narrative a revolution without precedent. Abandoned the reassuring distinction between good and evil is typical of production “happy ending” of Disney, Homer & Company have opened a Pandora’s box. The result was surreal comedy, satire, sarcasm on the worst taboo of ‘American way of life and distorting an icon of Western idiosyncrasies. But beware, there are other levels of interpretation.

“Every episode,”writes Occhetta, “behind the satire and the many jokes that make you smile, open issues related to the anthropological sense and quality of life”. Issues such as the inability to communicate and reconciliation, education and the education system, marriage and family. And do not miss politics.

Bone of contention, religion. What about the presence of the sound of Homer snoring during the sermons of Reverend Lovejoy? And what about the perennial humiliations inflicted on the pathetic Neddy Flanders, the evangelical orthodox? Thin unjustifiable criticism or blasphemy?

“The Simpsons,” Occhetta claims, “remain among the few TV programs for children in which the Christian faith, religion and the question of God are recurring themes”.

The family say the prayers before meals and, in its own way, believes in the afterlife ” and she is the means by which the faith is transmitted. The satire, however, “rather than involve the various Christian denominations overwhelms the evidence and the credibility of some church people”.

Let me be clear, the dangers exist, because “the laxity and lack of interest that may arise to educate even more young people to a private law relationship with God”. But a grain of salt is necessary to separate the good from the grass weeds. Parents need not fear for their children to watch the adventures of the little men in yellow. Indeed, the realism of the texts and episodes “could be the opportunity to watch a few episodes together, and to grasp the ideas to talk about family life, school, couple, social and political”.

In the stories of Simpson skeptical realism prevails, so “the younger generation of viewers are educated not to delude themselves”. The moral? None. But you know, a world devoid of easy illusions is a more humane world, and perhaps more Christian.

Me love you wong time. If I was an Adelaide rate payer I’d be voting for him. Any candidate with Wong in his name who campaigns on the slogan “Me love you Wong time” is my kind of guy. And there was businessman Francis Wong with three attractive female supporters peering out of the pages of the Sunday Mail with tee shirts carrying just that message. 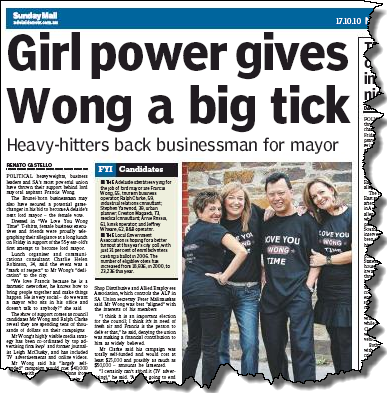 It is an election slogan of sheer genius. Mr Wong has employed a spin master with such an ability to get a message across that surely for his television advertisements he will show an extract from Full Metal Jacket. 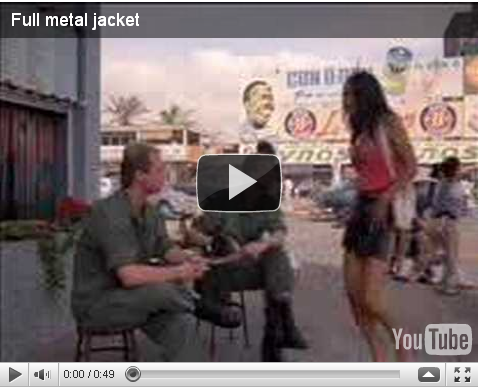 Obsessed with a Prime Ministerial hairdo. Who said the political press only ever writes about the physical appearance of female politicians?

From The Independent comes this look at the hairdo of the British PM David Cameron revealing the work of Lino Carbosiero, hairdresser to Madonna, Amanda Holden and the Osbourne household. 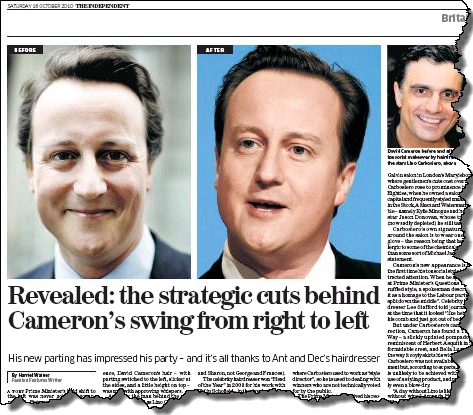 The part on the Cameron head, we are told, has moved from the right to the left and met with general approval at the recent Conservative Party conference.

Does Sarah Palin mean what she says?

“I’d rather be doing this than in some stuffy old political office. I’d rather be out here, being free. Family comes first. It’s just got to be that way.”

That’s the Sarah Palin message in the just released trailer for her eight part television series Sarah Palin’s Alaska that is to go to air on American cable television next month. But does she really mean it or is this another link in the campaign chain she hopes will end with her Republican presidential nomination? 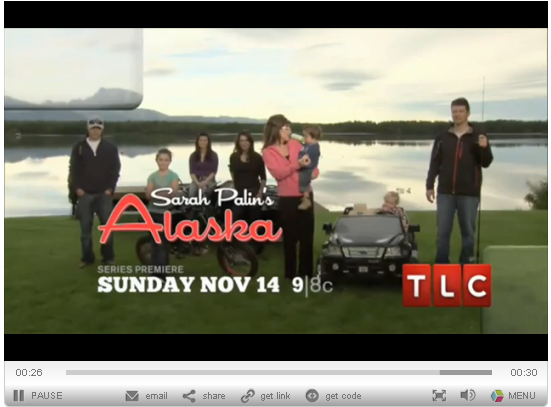 What the new series certainly is is inspiration for the nation’s television comics. Here’s the Jimmy Kimmel live version of what is to come in the Palin series. 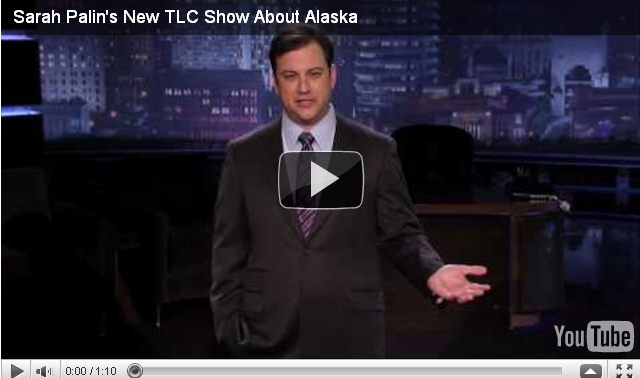 Blowing it myself — an impudent little tip and thanks be to Robbie. Even we old bookmakers get a tip right occasionally. From Friday’s Crikey email and on the website: 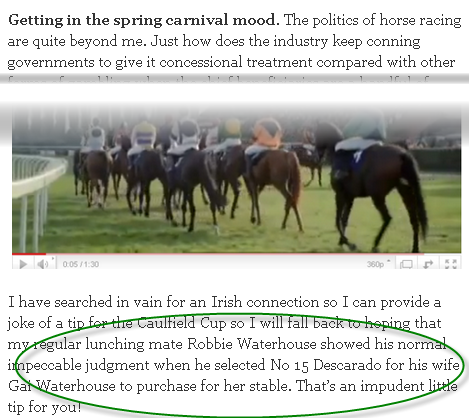 And from Saturday’s results: 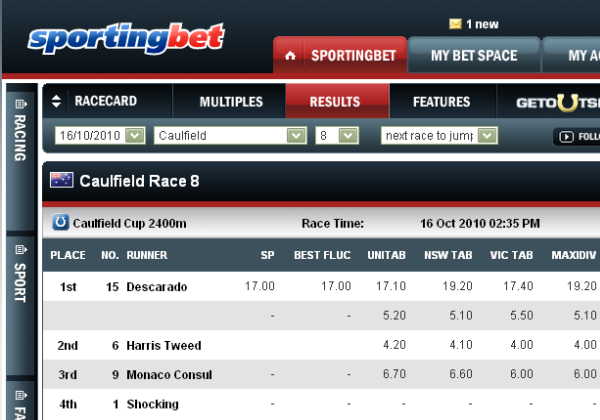 As journalism jobs go, how will graduates find work?