The Libs and Murdoch. A senior federal LNP member (and good friend) tells me that senior LNP  “faceless men” have an appointment with his highness, Prince Rupert Murdoch, for next month’s visit. The purpose is to argue in favour of Mr T, in an attempt to consign the Prince’s personal loathing of Mr T to […]

The Libs and Murdoch. A senior federal LNP member (and good friend) tells me that senior LNP  “faceless men” have an appointment with his highness, Prince Rupert Murdoch, for next month’s visit. The purpose is to argue in favour of Mr T, in an attempt to consign the Prince’s personal loathing of Mr T to the sidelines in the best interests of the Conservative movement.

Why, you ask? Abbott is now regarded as utterly unelectable by all but the most recalcitrant, hard-right members of the LNP federal caucus. Were a leadership spill called tomorrow, it is suggested that the numbers would go for Mr T — by roughly 10-15 votes, a landslide win in contrast to the last spill. The meeting with the Prince is regarded as paramount to the LNP’s objective of winning in 2013, let alone forcing an early poll.

Lundy’s paper trail — the investigation. It appears that Thursday’s tipster has comically exaggerated the price of Senator Lundy’s preferred, environmentally-friendly stationery, leading to something of a wild-goose chase between her office and the Department of Immigration and Citizenship to clear up the confusion. This little fracas over a sub-$1000 paper budget has now cost many multiples of that in senior departmental and parliamentary staff time. What a tip! Meanwhile, the Senator has been blissfully unaware of paper shuffling on the home front, collecting first prize at the International eDemocracy Awards in Paris.

Aus Post to quit Tassie? Word is filtering out that Australia Post will shortly close its Tasmanian office and its operations managed from Victoria.

It can be a set rule that Chinese students caught chatting in Mandarin during class are “penalised”. Chinese students used to a completely different system of referencing back home are not properly prepared for Western referencing methods and then are subject to extremely harsh academic dishonesty outcomes. The sense of discontent among Chinese students is palpable, in that they are being treated like idiots for courses of study for which they are paying a small fortune. Absolutely no bang for their buck and an indication that the University of Sydney is ignorant to the outcomes that will flow from the stories these students are telling to their embassy, families, etc. Only when Chinese students stop coming to study at the University of Sydney might the reality set in …

Suncorp’s Personal problems. Strange goings on in the marketing department at Suncorp’s Personal Insurance division, which spends about $80 million a year, making it one of the nation’s largest advertisers. The division has had four marketing heads in less than a year, with the latest recruit a senior marketer from parent Suncorp’s Brisbane HQ, who’s been drafted in by CEO Patrick Snowball to sort things out. Snowball is not happy about the mess, which is impacting sales across the division that generates the most sales and profit.

Young staff on newest planes. I am told by a friend who is long-term cabin crew (multilingual person with 15 years’ international experience in economy, business and first) that the A380 is only staffed by the newest, youngest and least experienced recruits. People with 10 and 20 years of service are not allowed anywhere near the A380. Apparently they cost too much. Strange isn’t it, considering the A380 is the new flagship …

Net filter in the Hot Seat. Labor’s internet censorship has been dragged into the spotlight again, this time on Channel Nine’s Hot Seat. Try as they might to bury it, it’ll just keep on coming back to haunt them. Of course, given the misinformation Senator Conroy’s been putting out there nobody knew what RC stands for … 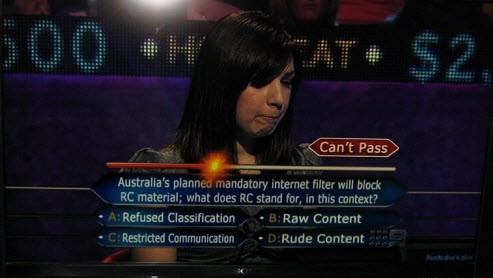 Those dirty Greens… John Barilaro was seen out and about campaigning in Monaro ably supported by a crew of Young Nationals. A bunch were lunching at a famous Queanbeyan eatery when one (with a snowflake tatt on his left leg and a ‘Green not Extreme’ sticker on his hoodie) took a swig from the glass bottle of water on the table. Eeeewwww, how disgusting! Don’t worry though, I told the waitress.