There’s something about Mary, but what about the other holy five?

It took just one minute and 100 words to crown Saint Mary of the Cross, but everywhere you turn this morning the nation has gone mad with Mary MacKillop fever. Forget the Commonwealth Games, the media have found a new 'golden girl' to applaud. But what about the other holy five?

Mary MacKillop — or Saint Macca to some — has finally been canonised by Pope Benedict XVI.

It took just one minute and 100 words to crown Saint Mary of the Cross, but everywhere you turn this morning the nation has gone mad with Mary MacKillop fever. Forget the Commonwealth Games, the media have found a new ‘golden girl’ to applaud. 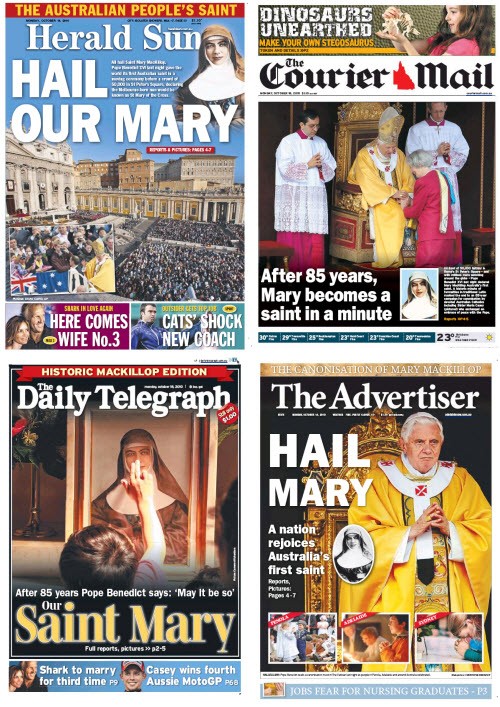 But it’s not just the papers who have got Mary fever. Around 8000 Aussies made the pilgrimage to the Holy See and — like a crowd of Fanatics at a Lleyton Hewitt quarter final — it wasn’t long before they were demonstrating their pride with a few rounds of “Mary, Mary Mary, oi ,oi ,oi”.

But if you only follow the local media — who, like any major sporting event, seem only to focus on the Australian angle — you may not have known that there were actually six saints canonised by the Vatican yesterday.

So in case you’ve been on Mars for the last few weeks, with your fingers in your ears and your head in a Richard Dawkins book, here is the rundown of the other holy five:

Canada’s first Canadian-born male saint, Brother Andre was dubbed the ‘Miracle Man of Montreal’ for his work helping the poor and sick. According to reports, he would rub the ill with oil from a lamp in his college chapel, leading to many being cured.

By the time of his death in 1937 he was receiving 80,000 letters a year requesting help and it was said he had cured many thousands of people. Almost 1 million turned out to pay their respects at his funeral.

Illiterate in early life, Spain’s newest saint was dedicated to improving social justice and women’s rights. Together with five other women she  founded the ‘Congregation of the Daughters of Jesus’ in 1871 to teach children and assist women.

The order continues to function in Latin America, Asia, Africa and Europe. According to the Daughters of Jesus, the miracle attributed to the intercession of Candida was the cure of an Hija de Jesus, Sr. Carmen del Val Rodriguez, who had multifocal leukoencephalopathy with severe coma, in the year 2000.

Born in Caserta, Italy in 1846, Giulia was a teacher devoted to the Virgin Mary. She also taught catechism to children and young adults and founded the ‘Congregation of the Catechetical Sisters of the Sacred Heart’ in 1905. Known for her holiness, ‘Donna Giulietta’ — Lady Juliet — has been the subject of a 73-year push for canonisation.

The second Italian saint to receive the big promotion this weekend, Camilla was a princess who opposed her father’s will when she turned 23 to live a religious life. An extensive writer, Camilla described her angelic experiences, which  helped her understand the mysterious workings of unitive love.

After her family was killed in 1502, she was called on by the Pope to found a number of convents.

Otherwise known as Stanislas Kazimierczyk, he was a Polish preist who was educated in theology and philosophy. The King of Poland said it was his intercession that led to victory over the invading Tartars and in the first year after his death 176 blessings were ascribed to his intercession.

Spare me days – not enough Mary McKillop story. Frankly the sheer hypocrisy of this organisation. The contradiction between the life of this probably kind and good woman, with a commitment to helping the poor and needy; and the regal splendour of the pope and the vatican is vomit-worthy. For the church it is all about the money, and they will make millions out of this. The good Mary would be turning in her grave. Amazing too, that only dead priests and nuns can perform miracles.

I seem to remember hearing this was “job lot”, but not having read or heard about “other Catholics” from other countries having entrants in “the big race” – in our media “dedicated” as they are to bringing us “the news” – I discounted it as some sort of international conspiracy to undermine our religious superiority and purity.
Seems, though, the media has been more concerned about “national pride and less about religion and Christian sainthood” – “selling soap”?
Don’t know how “real Mary” would have seen this feeding frenzy – backed with “ad space” – as it has been used?

Yes and all miracles are never anything much that people can see – why is it that amputated limbs never grow back? Eyesight or hearing is restored? Its so much nonsense.
But its a handy distraction from all those abusive priests isn’t it?

Bill, funny, too how the mortal hierarchy of the church, ensconced as they are, treat them when they’re alive too!
How would Jesus be greeted today – with that “humble, tolerance message” of his?

By remaining acutely vigilant I somehow managed to avoid, dodge and steer clear of the bulk of MacKillop palaver on the weekend. A fast reacting hand on the remote control saved me from most of the ridiculous images of pomp and hypocrisy. And I gave all newspapers a miss.

Today a neighbour I’d formerly regarded as intelligent greeted me, “Isn’t it wonderful we’ve got our own saint at last?” For Chrissake.