Prepare yourself, former PM John Howard has returned from the metaphorical dead to appear on a special Q&A. Plus, the former editor of most of Melbourne's major newspapers, Bruce Guthrie, has embraced Twitter.

He’s baaack. Prepare yourself, former PM John Howard has returned from the metaphorical dead to appear on a special Q&A, live on October 25. It’s going to be the John Howard Hour, with Howard the only guest, taking questions from host Tony Jones and the audience a la the Tony Abbott and Julia Gillard specials during the recent election campaign.

The program is nicely timed to coincide with the launch of Howard’s autobiography Lazarus Rising. But author Howard might need to work on his search engine optimisation skills — right now if you Google Lazarus Rising you gets lots of articles on science fiction novels and episodes of Supernatural, but not a mention of Bennelong’s old MP… — Amber Jamieson

On Friday, Guthrie took News Limited columnist Andrew Bolt to task for Bolt’s column suggesting he had become the journalistic equivalent of Mark Latham for the “shoddy kiss-and-telling” apparently contained in the tome (Bolt quoted piously from the journalist union’s formal code of ethics on the treatment of sources). But Bolt’s former editor-in-chief was having none of it:

Elsewhere, Guthrie, who was bizarrely the subject of an “ode” in The Australian this morning, also reveals that he dined with Bill Gates and Warren Buffett in February (for which he picked up the cheque). And he tweets glowingly of Saturday night’s appearance alongside Crikey and Age scribe Lawrence Money on Triple R’s legendary Party Show, which also featured talkback from Stephen Mayne in New York after the News Corp AGM. The rollicking programme’s mysterious host, Headley Gritter, is believed to be the subject of a forthcoming Fairfax profile piece. — Andrew Crook

Mary watch: You can watch the canonisation of Our Mary — or “Saint Macca” as News.com.au affectionately dubbed the miraculous one this morning — on The Daily Telegraph website. It’s the video under a rendition from “s-xy pole dancing world champion” Felix Cane from the Miss Pole Dance Australia competition. Mary would be proud. 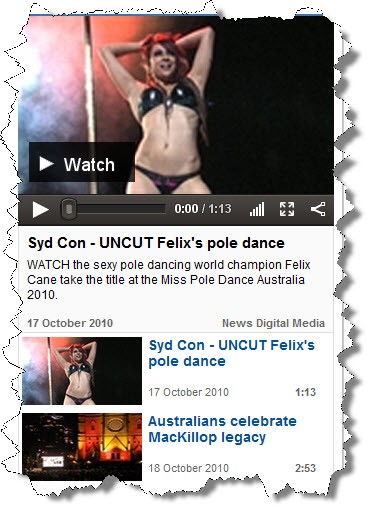 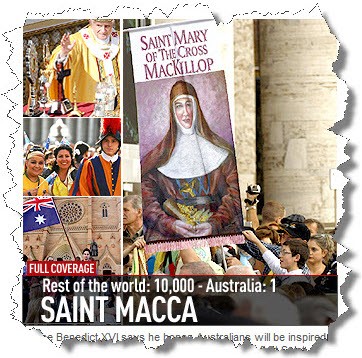 Fray bumped up; more changes for the SMH?

“Peter Fray has snared one of the most powerful jobs in Australian media. He becomes Editor-in-Chief of the Sydney Morning Herald and The Sun-Herald newspapers.” — The Australian

Murdoch buys Republicans — “in the interests of the country”

“News Corp, the owner of Wall Street Journal, the New York Post and the Fox News channel in the US, had sparked controversy by giving $1m over the past three months to two organisations promoting Republican candidates in November’s Congressional elections.” — The Telegraph

Restoring sanity, with Stewart and Oprah

“Though no one is quite sure what it is going to be yet, the Rally to Restore Sanity, organized by the comedian Jon Stewart and set for Oct. 30 on the National Mall in Washington, is drawing widespread national attention.” — New York Times

“A pair of profiles that repeatedly compared Nick Denton to Rupert Murdoch has sparked the inevitable discussion about whether Nick Denton is, in fact, worthy of comparison to Rupert Murdoch. The New Yorker’s John Cassidy says he’s not because Denton’s Gawker Media is a tiny fraction of the size of Murdoch’s News Corp. and other big media companies, and its growth to that level is far from assured.” — Forbes

Inside a reporter’s mind … it’s a little scary

“Believe it or not, reporters would probably find it as scary to be in your mind as you would to be in theirs. The catch is that they’re paid to be in yours and will do their best to get there.” — Huffington Post

“Kidnap, torture and death are as much a part of journalists’ lives in many parts of the world as the communities they cover. Last year 70 journalists were killed, making it a record year, while so far this year the toll stands at 67 deaths.” — The Guardian

We love to Google, more than any other

“Google, Microsoft and Facebook are the only digital companies whose sites are visited by more than 50% of online Australians every month, according to new data from Nielsen.” — Mumbrella