Shouldn't Chile and Chileans at least get a capital letter for all their hard work? Plus, the letter of the day from the NT News and other media news. 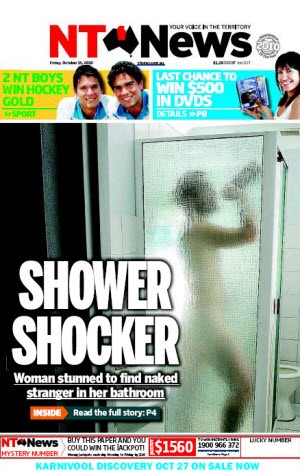 Letter of the day: From the NT News too, of course. Shouldn’t Chile and Chileans at least get a capital letter for all their hard work? Vox pop of the Day: Geelong Advertiser readers would eat KFC and drink VB if they were Chilean miners… “…if there’s one thing subeditors love about sexual assault allegations, it’s the opportunity to dust off that whorey — sorry, hoary — old headline cliché: ‘probe’.” — The Enthusiast

Crime in 140 characters or less

“The Greater Manchester Police is tweeting all of the incidents it deals with in 24 hours as part of a bid to raise awareness of what they do in a typical day… It’s like a real life version of The Bill, only with better writing.” — The Telegraph

What’s the value of sports journalism?

“The sports journalist needs to be able to reconcile that writing about Sally Pearson’s false start or whether St Kilda let an opportunity slip, is also making a contribution to society, albeit in a less obvious way.” — Upstart

“Fairfax Media has delayed briefing investors on its planned re-organisation until after its annual general meeting next month.” — Sydney Morning Herald

3500 new workers, but Google still swimming in it

“In a nod to the digital, multi-platform age, the Associated Press announced Thursday that it will no longer use the phrase ‘Associated Press Writer’ in its bylines. Instead, staffers will be identified merely as ‘Associated Press’. AP editors said that the change was an acknowledgment that AP content no longer appears solely in written form.” — Huffington Post

The locked News of the World explained

NT News: ok, it would be unusual to find a naked stranger in your shower (although, come to think of it, several friends and acquaintances have reported this occurrence following a big night out). But why would the resident take a photo!? Or is this front page pix merely a journalese re-enactment of the event?

“From the NT News too, of course” — people who live in glass houses shouldn’t throw stones. At least it was a letter from a reader, not the work of the newspaper. Crikey is not blameless in grammar, punctuation, and presentation. The latest things I have noted are two summaries currently on page 3 of the archives — from the Morning Market Report of 14th October, “he Aussie dollar rose to a new record high overnight as gold was up to another record” and from Glenn Dyer’s TV Ratings of the same date, “ot a very inspiring night last night as Ten’s Commonwealth Games coverage again sails to attract viewers.”

I have noticed other readers’ comments about things like this in the past but have refrained from doing so until now. Instead I would send emails to Crikey. Usually the corrections were made, and sometimes I even received a brief “thank you” reply email. Lately the corrections have not been made, and my last email resulted in a “Not read” reply. That made it my last email, and this will be the only time I comment here. Another failing standard at Crikey, methinks. We all make mistakes, but Crikey does not appear to care. However, to then publicly ridicule someone else for not using capital letters is a bit much.