Never fear Kerry-watchers, the ABC has announced today that Kerry O'Brien will return in 2011 as the new face of a rejigged Four Corners, also Nine v ABC in Chile, the 'dirty digger' exposed and much more in a bumper media briefs.

Kerry to host rejigged Four Corners. We all knew Kerry O’Brien wasn’t going to ride quietly into the sunset when he announced his departure from the 7.30 Report — that iconic red hair has at least another few years in it yet. Well never fear Kerry-watchers, the ABC has announced today that O’Brien will indeed return in 2011, as the new face of a rejigged Four Corners.

Sue Spencer, executive producer of Four Corners, said in a statement today that the show, which is known for its long-form investigative journalism and absence of a host, will change formats next year, with O’Brien set to take the chair as presenter. “The great strength of the program will continue to be the long-form journalism produced by the reporters and producers,” said Spencer. “But Kerry will be the new face of the program, and his skills as a presenter and interviewer will give us added flexibility and depth in the studio.” — Tom Cowie

Nine v ABC in Chile. Channel Nine clearly had the best coverage of the Chile mining rescue yesterday — just ask director of news and current affairs, Mark Calvert. He was crowing on Twitter last night, while sticking the boot into the ABC…

ABC News 24 did carry about two and a half hours of BBC News feed, Aunty told Crikey today, interspersed with its own anchors and reporters on the ground. “We use our partners where can,” a spokesperson said. That was still less than Sky News, which like all networks relied on footage from overseas news organisations, it was suggested. — Jason Whittaker

Reborn — and in trouble. Thirty-three miners were trapped underground for more than two months in this inspiring human story. Or just one miner, as Australia’s (and, admittedly, much of the world’s) media would suggest. From The Daily Telegraph: 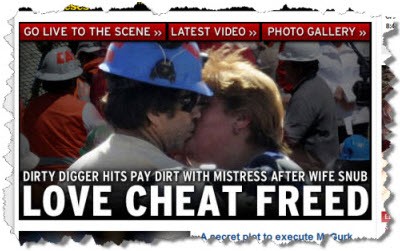 And the Herald Sun: 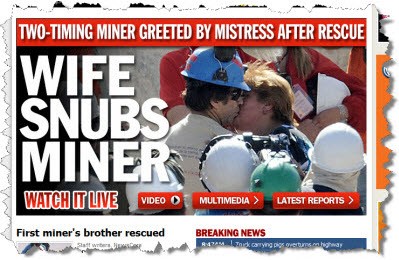 And even the Sydney Morning Herald: 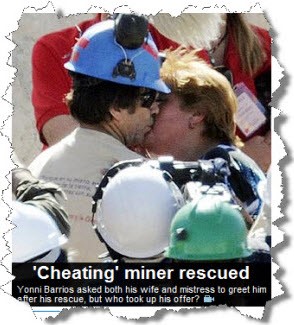 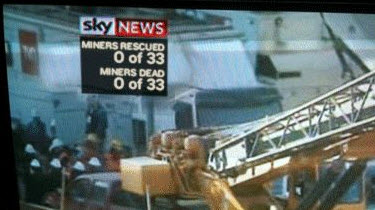 Thanks for the cash, Rup. Crikey founder, shareholder activist and long-time News Limited nemesis Stephen Mayne is off to New York today for another meeting with Rupert Murdoch at the company’s AGM. In his luggage is a present for Rupert — a copy of Bruce Guthrie’s new book Man Bites Murdoch, the juicy account of how Guthrie was boned by News and successfully (and rather lucratively) sued for unfair dismissal. Guthrie, kindly, has signed the copy… 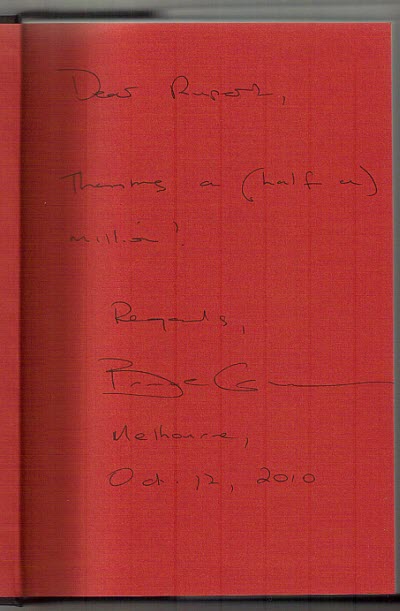 The Age tones it down. They really do read what you write under their stories — one complaint about an inappropriately saucy pic to illustrate a story on r-ape led to a prompt change… 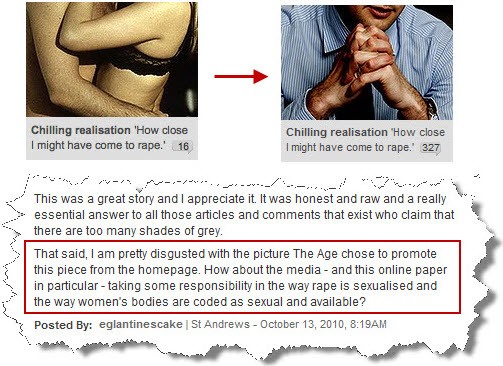 Vox Pop of the Day: Did they speak a different language in the Far North? The Port Douglas & Mossman Gazette asks…

From the ‘how did we miss that’ file: Also from the Gazette, this week’s ‘horrorscopes’, courtesy of Derek the Angry Dugong… 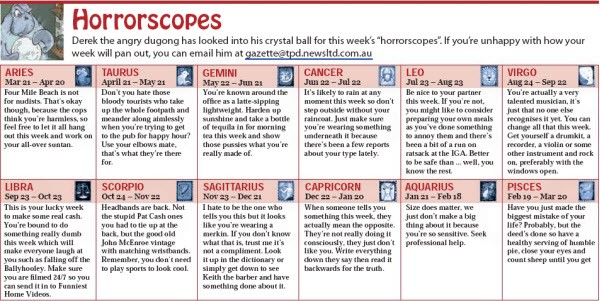 “The Metropolitan police have written to the Guardian asking for any new material the paper holds about phone hacking at the News of the World.” — The Guardian

“The White House is usually quite good at keeping a muzzle on the media after one of its off-the-record sessions with President Obama and senior members of his administration. But not this week.” — New York Times

Helen Thomas is sad, but unapologetic

“In a radio interview, former White House correspondent Helen Thomas acknowledges she touched a nerve with remarks about Israel that led to her retirement. But she says the comments were ‘exactly what I thought’, even though she realized soon afterward that it was the end of her job.” — Huffington Post

In New York, it pays to be on page six

How much did B ruce Guthrie pay you guys for the publicity this week? Surely a bucket load guys?

ROFL at the Sagittarius one! (I did have to google it) – but where do you suppose Sagittariuns are being accused of wearing it??

Stephen Mayne’s present for Murdoch is a gem. I know how Stephen thrives on those News Ltd AGMs; it’s his best opportunity to create well-deserved mischief.

The Sky News death toll is a photoshopped fake.