Legendary American athlete and symbol of the American civil rights movement Tommie Smith is selling his gold medal, made famous by the iconic Black Power salute photo. But there's an Australian angle to this story we should never forget, writes Leigh Josey. 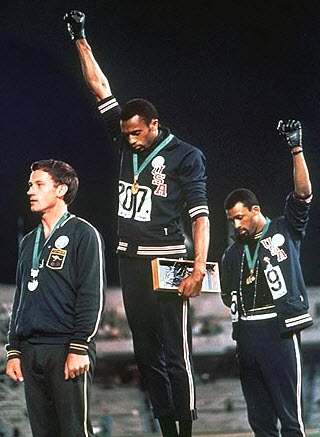 Today it’s reported that Smith is putting his gold medal up for auction — and the red Puma boots he wore.

It’s sad that in an era of professionalism and commercialism in sport, where drugs and gambling (and not to mention underwhelming events such as the current Commonwealth Games where the pursuit of gold appears to be the overarching ideal) detract from the purest events — and harbingers of change — that sport can produce, such as that night in Mexico in 1968. Smith’s medal, as Barry Petchesky wrote in US sports blog Deadspin, “belongs with Smith, or in a museum, not on an auction block.”

However, this story has Australian relevance, an important Australian context. For the man who won silver that night was Australian Peter Norman. He is part of that iconic photo, but so much more.

Norman passed away in 2006. Smith and Carlos attended his funeral, both were pallbearers and gave eulogies.

“They were like his brothers,” Peter’s daughter Belinda Norman, who lives in Melbourne, told Crikey today. “He would tell me the story [of 1968]. He had his medal at home. I took it to school for show and tell in grade one and the teacher had to call him to check he knew I had it. He wasn’t precious about it.”

According to Belinda, it “wasn’t all about the medal” for her father, who won silver for Australia but left Mexico City with two lifelong friends.

When Peter attended San Jose State University’s unveiling of a statue created for Smith and Carlos (who were both alumni) in 2005, Peter “was treated like a king, a celebrity,” recalls Belinda.

Belinda said it was her father’s idea to split a single pair of gloves so both Smith and Carlos had a glove each (it’s why they have gloves on opposing hands) as Carlos couldn’t find his pair before the medal ceremony.

As for Smith selling his gold medal: “Dad wouldn’t have had a problem,” says Belinda. “He wouldn’t have judged Tommie for selling the medal at all.”

Because, as the world found out on a dais in Mexico City in 1968, there are some things more important than gold.

Nice piece Leigh (especially the observation about the pursuit of gold as a corruption of an older nobler goal) and I know Robert Plant sang glitters but it’s ‘glisters’ ferchrissake. Other wise Hamlet may as well have said ‘live or die? Whatta ya reckon’

SBH, we had that exact debate this morning when doing the headline. But I vetoed the “glisters” bloc within the editorial team because I am a mad Zep fan. Saying that, you are %100 correct.

Nice story . . . but perhaps Tolkien’s version, “All that is gold does not glitter” would have been more appropriate, and saved you the trouble 🙂

On another tack – ABC Local Radio has broadcast very little else but these effing Games for nearly two weeks now. Some queries: is it a non-ratings period (like school holidays) if not where will the listeners have went? And will they come back? And how much did it cost? Probably the entire budget of one of the other ABC radio networks and the Drum combined? Who cares or are we in an ABC freeze zone?

A good piece Leigh and a timely reminder of how sport can be valuable – and I don’t mean the monetary sponsorships so desired by today’s athletes.

How heartwarming to learn that Peter Norman “wasn’t precious” about his medal.