Abbott is a big sook

The macho Leader of the Opposition is coming across as a big sook.

Abbott is a big sook. The macho Leader of the Opposition is coming across as a big sook. His petulant outburst about “an act of bastardry” by Julia Gillard has done him no good at all. I’m on record as not approving of making public that Tony Abbott chose not to visit the troops with the Prime Minster but for the life of me I cannot understand why the Liberals keep going on about it. With the help of Christopher Pyne — Ms Gillard is a ”a back alley street fighter” who is ”not fit to be prime minister” — Mr Abbott is looking less and less like a potential Prime Minister. I predict he will not remain Opposition Leader for long.

A nutter in the White House. Nancy Reagan, when husband Ronald was in the White House, scheduled events on the advice of an astrologer but there’s no evidence that the President himself believed in such hokus pokus. With Reagan’s predecessor Jimmy Carter, however, the evidence of nuttiness comes from his own words as dictated for his diary at the time with annotations added for a recently published version of it. 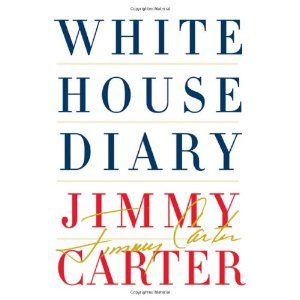 From a review of White House Diary in the New York Review of Books comes this weirdly frightening gem:

Carter’s religious views were unfairly derided by some commentators. He was a sophisticated reader of Paul Tillich and Reinhold Niebuhr. But one does wonder at the reliance he put on psychics to get his foreign intelligence. After the CIA briefed him on a plane crash in Zambia, he dictated:

An American parapsychologist had been able to pinpoint the site of the crash. We’ve had several reports of this parapsychology working; one discovered the map coordinates of a site and accurately described a camouflaged missile test site. Both we and the Soviets use these parapsychologists on occasion to help us with sensitive intelligence matters, and the results are unbelievable.

He appends to this entry his own current comment: “The proven results of these exchanges between our intelligence services and parapsychologists raise some of the most intriguing and unanswerable questions of my presidency. They defy logic, but the facts were undeniable.” Later he dictated this: “We had a session in the Situation Room concerning a parapsychology project where people can envision what exists at a particular latitude and longitude, et cetera.”

A shameful admission. Personally I think it’s a sacking matter. Federal Sports Minister Mark Arbib was asked on ABC Television on Monday how many players were in an AFL team. And the reply?  “That’s a good question and I have to tell you, I don’t know,”  said Minister Arbib. “I’m a Sydney boy, I grew up playing rugby league.” That is no excuse. The Prime Minister, like any good bulldog, should bite immediately.

Not good enough for Republicans. Peter Diamond, a 70-year-old economist at MIT, just won the Nobel Prize in Economics. Peter Diamond, the very same 70-year-old economist at MIT, was appointed to the Federal Reserve in April by President Obama but has had his confirmation blocked by Senate Republicans who doubt his economic qualifications for the job. Strange place that United States.

A strange unity ticket. It takes something unusual to get the conservative leaning London Daily Telegraph and Daily Mail newspapers to join forces in a political campaign with the left-liberal The Guardian and the Labour backing Daily Mirror but Rupert Murdoch has managed to get them to pull together.

The common cause of the newspaper groups is the increasing dominance of the British media that would flow to Murdoch if News Corporation is allowed to takeover all of the BSkyB television network.

Jimmy Carter, the nicest president of them all

Couldn’t agree more about Tony Abbott. He has a glass jaw. I notice the conservative commentariat are urging him to regain the discipline he showed during the election campaign. That is a bit like asking a rabid dog not to bite, or an orca not to eat a seal. He simply can’t help himself (nor can Christopher Pyne for that matter). They are both stone throwers, nothing more.

Christopher Pyne reminds me of a maltese terrior a friend of mine had. He would yap and snap around your ankles, and only resulted in being a real pain in the backside. I stopped visiting, as it was almost impossible to have a conversation. Apparently, Pyne is the loud voice you can hear when any person in the ALP is speaking. Some times I’d just turn it off! He should be sent out every time he yaps on! What children they are(sorry kids). 2 yr olds chucking a toddler tantrum springs to mind. A nephew of mine used to throw himself on the ground when he didn’t get his own way – my sister and I would walk away – keeping an eye on him at the same time. Just made loud noises! Like Christopher Pyne and Abbott. Nothing of substance, just a lot of unpleasant noise?

Richard – It has been suggsted by bloggers in the MSM that the reason for beating up this ridiculous story (Abbott/Gillard/Afghanistan) is all about what the Liberals DO NOT want the media to focus on. Try the “audit” hoax, or even Wayne Swan’s return from Washington where, apparently, he and the Australian economy were feted. Makes sense to me.
Devious bastards, that lot!!

If Abbott can’t handle the “mere” woman Prime Minister of own own country, how on earth is he going to manage and deal with the cut and thrust of international issues?
It leaves me in fear and dread with the thought that he came soooo.. close to leading this country!!

Love to see the unhinged monk try his stupidity on German PM Angela Merkel, she would chew the sooky boy up and spit him out as dregs, which is very fitting. Dregs of a leader is about all he is these days.