Subbing editors out of pay. When is a newspaper editor not a newspaper editor? When they work for Cumberland Courier Newspapers in Sydney. Under a new plan being driven by editor-in-chief Bob Osburn and announced to all staff via impersonal group email last week, from early next year ALL Cumberland Courier titles will be put together at the fast-approaching News Central desks being established at Holt Street. That means editors will no longer have any say in how their newspapers are designed or built  — all will be done at Holt Street in a rolling 24-hours-a-day shift subbing set up.

Word subbing, layout and design are all being taken away and dropped into the maw of the great sausage machine being planned for News HQ. Here’s the sneaky thing: the blatant de-skilling of the editor’s job will be complete just a few months before existing AWAs start expiring and the company will be embarking on a new round of pay negotiations with editors. Expect the company to argue that with no layout or design skills needed, editors will be classified as ‘editorial co-ordinators’ and have a new pay scale that reflects the diminished role put on the table.

Lower pay will also match longer hours as many papers will be subbed in gruelling pre-dawn shifts that will neither respect nor heed the working hours of the new ‘editorial co-ordinators’. Subs are being readied for similar treatment at Cumberland Courier. They are being marched off to Holt Street and told to be ready to be part of the rolling 24-hour-a-day shift subbing empire.

So classifieds left the asbestos-riddled building at Parramatta a few years back. Then the pay office went to Holt Street. Now subs are going too. Workers wonder if it just makes room for more of the booming marketing department, which now holds such sway at Cumberland Courier and dictates so much of the content and presentation of the company’s once admired newspapers. Seems like a good topic for one of the risible focus groups Cumberland Courier is paying advertising agency Banjo a spectacular six-figure sum to organise.

Banks using farms as collateral? According to cattle and cane property owners in NSW, at the height of the GFC the banks (ANZ and NAB were the ones mentioned to me) proactively offered low interest loans against property — provided that the proceeds of those loans (and we are talking millions per loan) were placed in bank stock. Luckily it all worked out — the farmers doubled their money in 12 months. But can this be considered share market manipulation? Supporting your own stock with loans from your own balance sheet?

The Australian Unity board. Regarding GMHBA and corporate governance, and its constitution designed so existing directors determine who is eligible for board nomination. Your tipster need only look a bit further around Port Phillip bay to the Australian Unity headquarters to find a another much larger and diversified mutual with a constitution whereby the board will determine eligibility for nomination. Apparently a member inquiry for a board nomination form in 2009 lead to a hurried amendment to the constitution whereby a clause similar to GMHBA was inserted for board member applications. Maybe at the AU AGM later this month a member may wish to ask if similar offers have been made and rejected for the AU health insurance division.

South of Perth, it’s Wayne country. I came across this Thomson Reuters AlertNet interactive map (through Bing/Microsoft/NASA and others) and thought I’d compare the satellite images with Google Earth. Imagine my surprise when I headed towards home in Perth, and found a hitherto unknown region of WA! I know that WA’s resources boom is helping boost the treasurer’s coffers, but this is taking strategic geography a little too far… 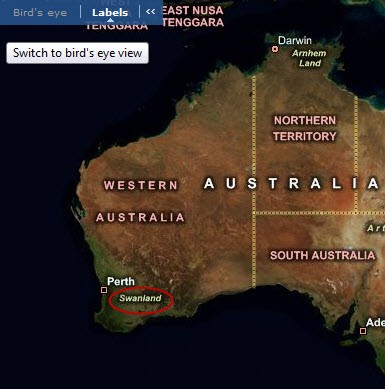