Vote I, stay put at home

If proof was needed that our political leaders are still in election mode, the way that they scurried off overseas but hurried home again surely provides it.

Still in election mode. If proof was needed that our political leaders are still in election mode, the way that they  scurried off overseas but hurried home again surely provides it. Neither Julia Gillard nor Tony Abbott wants to risk being seen as in the Kevin Rudd mode of seeming to enjoy international travel. The voters, both have realised, prefer stay-at-home leaders.

A pity about the Howard book launch. Under normal circumstances the National Press Club could expect a substantial turnout of MPs to attend a luncheon address by John Howard to launch a book of memoirs. But not this month. The tough Liberal and National Party line on pairs will confine his former political friends and foes to watching on television within hearing of the division bells.

One lot who won’t need the water. Well there is one lot of farmers who will be able to handle the cutback in water allocations throughout the Murray-Darling Basin. With the Australian dollar at today’s levels, grape growers might just as well start pulling out their vines. There’s no way that our country’s will will be able to compete on world markets. The industry will be well and truly stuffed and there will be plenty of water available for the vegetable farmers to cope, so don’t worry about those stories of saving the Murray leading to food price inflation. There’ll just be more Californian green beans to nestle alongside the imported oranges.

A harsh political reality. The ABC has irrigation farmers talking of riots in the streets of regional Australia when water allocations are cut back and there is sure to be considerable anger. The harsh political reality, however, is that the votes at a federal level are in increasing the water flow in the Murray not in preserving what is an environmentally destructive way of life. There is not one Labor seat at risk.

Labor still well fancied. A couple of retirements and a closer opinion polls have not shaken the assessment of the market that Labor is the likely winner of the Victorian state election.

US securitised home loans return to threaten the banks. Just when you might have thought that those dreaded securitised housing loans in the United States had finally disappeared as a threat to the world’s financial system, they are back. 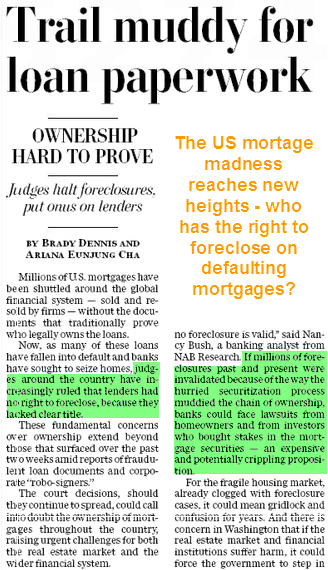 The Washington Post has the story this morning and a frightening read it is.

Greed will win, the government cant let their banking partners down.
The poor homeowner will lose eventually, how dare they stand up for their rights.