Opinion and analysis website New Matilda, thought to be a casualty of the still-weak Australian market for online advertising, will re-open its doors in late October. Plus other media news from around the globe.

New Matilda‘s brave new era. Opinion and analysis website New Matilda, thought to be a casualty of the still-weak Australian market for online advertising, will re-open its doors in late October. In a note posted this morning, editor Marni Cordell said that with “excitement and trepidation” the site would soon start soliciting fresh contributions backed by reader cash, after announcing in May it would shut its doors. It plans to publish until at least the end of the year, with life in 2011 contingent on subscribers pitching in.

The site had previously offered subscriptions but shifted to an advertising model in 2007 when reclusive mathematics millionaire Duncan Turpie purchased it for $10 after heavy losses. In an email sounding out former contributors, Cordell said the new New Matilda would still be operating on a “fraying shoestring” and the relaunch was a “gamble”. In today’s note she said: “Having crunched the numbers, we’ve realised it would only take a third of our registered users to sign up to become financial supporters…for New Matilda to live again.”

New Matilda was forced to shut its virtual doors in June after advertising flatlined and a new white knight to bail-out the operation couldn’t be found. It had been a prominent feature in the online comment space, gradually growing its profile since its original launch in 2004.

Cordell said she hopes to break and drive the news agenda, rather than becoming an exclusive repository of the “surfeit of op-editorialising” seen during the federal election campaign.

She declined to name the proposed subscription plans when contacted by Crikey, but said the annual rate would be comparable with existing models. Crikey currently levies an annual subscriber fee of $160, or $260 for a two-year deal.

A number of the website’s marquee contributors would return to the fold — including national affairs writer Ben Eltham and satirist Ben Pobjie — but a full roster won’t be reinstated until the site can find its legs. New Matilda previously published between three and five pieces a day, but that number would be restricted under the new paradigm, Cordell said.

The experienced Cordell, who was left without a job when the site went belly up, will team up with former associate editor and ex-University of Sydney literature academic Catriona Menzies-Pike to kick-start proceedings over the next few weeks. — Andrew Crook

Flasher TMI. From the Port Douglas and Mossman Gazette yesterday… 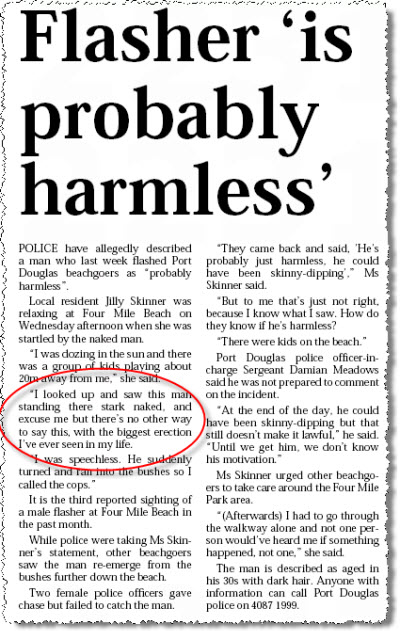 “Tina Brown, one of New York’s best-established British media figures, has set her sights on Newsweek, the historic but ailing weekly news magazine, in a move that could intensify her rivalry with Arianna Huffington, proprietor of internet magazine the Huffington Post.” — The Guardian

“The News Corporation chairman and chief executive will make his address on 21 October at an event organised by the Centre for Policy Studies, the rightwing thinktank founded by the former prime minister and the late Keith Joseph, one of her political mentors.” — The Guardian

“On Wednesday, Forbes magazine released its annual list of the World’s 100 Most Powerful Women. Not surprisingly, the list was full of high-powered media figures.” — Huffington Post

“Several major newspapers in Bolivia have made a joint protest against a proposed anti-racism law which they say threatens press freedom.” — BBC News