The SBS word game … vox pops of the day

SBS has again claimed the rights to the phrase 'the world game', this time in a sternly worded legal letter to the administrators of a not-for-profit online soccer forum. Plus other media news from around the globe.

The SBS word game. SBS has again claimed the rights to the phrase ‘the world game’, this time in a sternly worded legal letter to the administrators of a not-for-profit online soccer forum. The demand comes after the public broadcaster pressured Crikey last year to remove “the world game” from its tags section, because it claimed use of the phrase was a breach of SBS trademark.

The forum, which is registered at the domain name theworldgameforum.com, currently has 390 members and was set up after SBS shut down ‘The World Game Forum’ a couple of weeks ago, which at the time of its demise had more than 10,000 members. In the letter to the forum’s administrators, SBS claims it has “no objection” to third parties running discussion forums, but it does object to the “use of its trade marks in the domain name title and branding”. 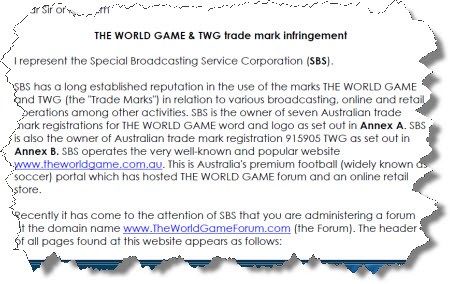 SBS’s lawyers also claim that, because the site has a similar name to the now-defunct official forum, they are “misleading users or those who search for SBS’s forum online”. When questioned by ex-members, SBS said it was shutting down the official forum because it was “built on very old infrastructure and is unreliable”. Soccer fans were encouraged to use Twitter and Facebook to share their views on the sport. — Tom Cowie

We’ve got it sworded, mate. Sometimes a story just doesn’t even need a sensationalised headline, such as this one from the Geelong Advertiser:

Cairns Post out NT Newses the NT News: A black croc called Darth Vadar. Impressive, although not for the spelling. It seems Vadar slipped underneath the radar. It should be Vader:

Vox Pop of the Day #1. Everyone seems to be hating on leggings and new sneakers at the moment…

Vox Pop of the Day #2. Another NT News classic…

Vox Pop of the Day #3. From the Cairns Post. You have got to love Queenslanders…

Mordor in the Gold Coast Bulletin? You know it makes sense.

“I’m not saying Zuckerberg did steal the idea for Facebook and isn’t a genius — at least, I’m not saying these things in this paragraph; like Sorkin’s screenplay, I’ll let my verdict on Zuckerberg unfold slowly in hopes of keeping you from wandering off to some other theater in the Cineplex.” New York Times

“ABC director of news Kate Torney has appointed two senior news executives to examine the format and style of the current affairs shows, including whether to keep Stateline on Fridays or extend The 7.30 Report to five nights weekly.” — The Australian

“Nine has attempted to extricate itself from a growing row over comments made on this morning’s Kerri-Anne Kennerley show in which the veteran presenter described women who go home with AFL players as ‘strays’.” — Mumbrella

Tribune Bankrupt — in more ways than one

“At a time when the media industry has struggled, the debt-ridden Tribune Company has done even worse. Less than a year after Mr Zell bought the company, it tipped into bankruptcy, listing $7.6 billion in assets against a debt of $13 billion, making it the largest bankruptcy in the history of the American media industry.” — NY Times

Social stragglers: Here’s why people online don’t like you …

“Have you been losing sleep trying to figure out why you got unfriended on Facebook? I hope not! But if you have been unfriended recently, you might still be curious to know the reason behind this distasteful act. Lucky for you, a new study conducted by University of Colorado Denver researchers will help you make sure you will never be unfriended again!” — All Facebook

Public integrity in the hands of the US public

“The Center for Public Integrity is asking the public to crowdsource the final weeks of the mid-term elections so it can detect efforts by third parties to influence races.” — Poynter

“In a Channel 4 News interview, the prime minister defended Coulson, who is facing allegations that he knew about illegal phone hacking during his time as editor of the News of the World.” — Guardian

SBS and particularly figureheads Les Murry and Craig Foster have been banging on for years about the media bias against football; but their organisation seems to be acting no different. To lay sole claim to the ownership of a often and generally used phrase is astonishingly arrogant. In the end Fozzie needs to ask himself – what would Baaatthheeelona or EEECCCC Mylan do in this situation? SBS are being far from technically and tactically world clarsh. Mark Bosnich is pissing himself in laughter and lil’ol’2%SBS’ bully boy tactics. Where will the sheep threads find a home now?

I for one am happy that particular forum no longer exists and I hope SBS will shut down the new ones as well. The place is nothing but a cesspool of disgusting multiculturalism, I have had it up to hear with all these non British stock residing in this country.

Hmm, shut down a valuable 8-year-old discussion forum because you can’t be arsed to run it properly….and then when the fans inevitably create a replacement, you threaten them with legal action. Some top PR work right there. Unfortunately for SBS I think they underestimated how tightly-knit that community was, irregardless of the occasional troll or spammer. Time to call them out on their bullshit.

Legalities aside, especially the glaring issue with trademarking such generic terms, I think it’s rather disgraceful the way SBS treats the fans of ‘The World Game’, which they purport to hold so dear to them.

For a public broadcaster, partly funded by tax payers, it seems they have very little interest in the public, but lots of self-interest.

I find it rather distasteful, that SBS would target their own fan base, with the threat of legal action. I guess this is a further sign of the corporate, dog eat dog world, that we live in. To think, the same people SBS are threatening, are the same people that contributed to “The World Game’, making the website and television show, the success it is today.

The World Game forum existed since 1998, it peaked at 20,000 members. SBS itself never sought to communicate with it’s large fan base, instead disparaged them and finally decided to axe the forum, without any dialogue.

Now that this 12 year old community has moved on, still being remaining avids fans of ‘The World Game’, despite the abhorred treatment by SBS, they seek to track down and destroy any remanents of the community. Rather pathetic. Some public broadcaster. They belong in a tinpot country with an authoritarian regime, like Iran.