On the water drip … Devine’s back

There’s some strange media management going on in relation to the release of the long-awaited Murray-Darling Basin Authority draft plan for the MDB. Plus, moderation filter fails Bolt and other media news of the day.

On the (slow) drip… There’s some strange media management going on in relation to the release of the long-awaited Murray-Darling Basin Authority draft plan for the MDB. After much negotiation, the Authority, which copped a bucketing (no pun intended) for delaying the release until after the election, agreed to hold a “lock-up” before the official release of the draft plan — on Friday at 4pm.

The rationale for the late Friday afternoon release was, according to the Authority, the potential impact of the draft plan on the markets. The water market — such as it is, courtesy of various state governments — doesn’t operate on normal business hours. It’s in effect a 24/7 market. Only a small number of water trading companies are listed on the ASX. If they were concerned about the impact of the plan on their share prices, they could have asked for a suspension in trading. Most of the major stakeholders in the sector instead think the MDBA wants to drop the draft as quietly as possible late on a Friday during the school holidays.

Now the Authority appears to have gone further. There will now be two lockups — one for the media, at the MDBA offices in Civic here in Canberra, and another for stakeholders, down the road at the National Convention Centre. It means the media won’t be able to tictac with stakeholders to get their comments until they’re allowed out at 4pm, delaying any overage of critical reaction. The decision to separate the media and stakeholders came from “high up”, industry insiders have heard — possibly from the minister, Tony Burke, himself. — Bernard Keane

Moderation filter fails Bolt. Andrew Bolt posts about the violence that occurred at South Australia’s Miss Africa pageant. The Herald Sun‘s moderators let this through as a comment:

I don’t think that’s contributing much to the discussion. The Herald Sun aren’t helping the discussion, their reputation, or the reputation of their columnist, by letting nonsense like that through. I think that Andrew’s moderators owe him an apology for allowing this to appear on a page that he puts his name to. — Dave Gaukroger of Pure Poison

Devine’s back on Thursday. Missing Miranda Devine? Well, she’s back. Her new employers at The Daily Telegraph have announced the conservative flag-waving Fairfax defector will write her first column for the Sydney tabloid — syndicated to other News Limited titles around the country — on Thursday. Devine will also file for News’ Sunday papers. As the press release excitedly touted:

“Miranda’s original, feisty and widely admired column ranges across politics, social trends and cultural issues. She writes about everything from bushfires, burqas, drugs and greenies to sexual harassment, the sexualisation of children, and the scourge of speed cameras, speed bumps and cyclists on our roads.”

As Crikey reported at the time, Devine left behind a salary in the range of $240,000 at the Sydney Morning Herald for an even more lucrative offer from the Tele. The Herald is yet to replace the firebrand columnist. — Jason Whittaker

Jumping the gun on rates. It’s common practice for the media to prepare multiple stories on set-piece announcements to have the news online first. But you do have to make sure you use the right one. This appeared on The Australian website as the Reserve Bank announced its interest rates decision — to keep them on hold: 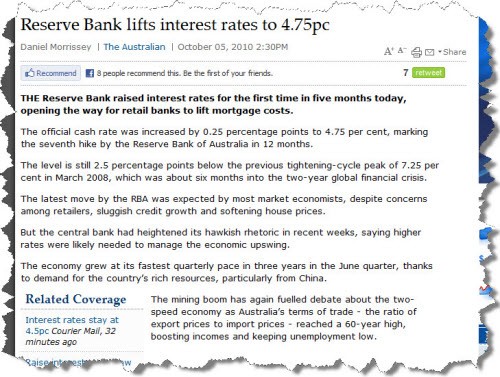 NT News watch: A classic cover from our favourite newspaper: man asleep in sofa on car roof, plus a story about a robber who cooks himself a burger. Simple, elegant, beautiful… “ACS:Law, the controversial London-based solicitors’ firm involved in making copyright claims, keeps about 40% of the payments made by alleged filesharers, while rights holders receive between 20% and 30%, research by the Guardian has revealed.” — The Guardian

“The Daily Beast today announces that Howard Kurtz will join as Washington Bureau Chief. In this new role, Kurtz will oversee the two-year-old site’s coverage of Washington and will report and write regularly on politics, media, and the intersection of the two.” — Daily Beast

“Harper’s Bazaar’s December 2009 ‘Twilight’ cover has been voted Magazine Cover of the Year in a contest sponsored by the American Society of Magazine Editors and hosted at Amazon.com.” — Huffington Post

We’re not all on drugs: ABC manager

“The ABC has denied there is a problem with drug use among its journalists, saying comments made by one of its producers were hypothetical.” — The Australian

The top Twits on US politics

“We’ve selected the top 50 Twitter accounts for following the latest US election news and political analysis, so you can keep up with all the controversy, surprises and polling throughout the campaign as they happen.” — The Guardian

No Jenny Morris, I’d bet you wouldn’t last a week doing it. You’re too decent a person.

I would sooner play tennis with turds than read another Miranda Devine article.

Luckily her writing for the Daily Whinge will make this quite easy.

Are you listening, News Ltd? I will demonize, libel and insult if Mikey can get in at least one overseas vacation a year.