Afghanistan (and Wilkie) get the coverage

Andrew Wilkie brought up the Afghanistan war as a topic deserving extensive debate. and received the coverage for it.

Afghanistan has been a central issue over the past week, initially as Andrew Wilkie brought up the war as a topic deserving extensive debate, developing into an interesting diversion from bipartisanship from David Johnston but later denigrating into yet another tit for tat over procedure, schedules and silly comments from both major parties … it would almost make you think there’s something fundamentally structurally wrong with our two party system…

Anna Bligh and Kristina Keneally heading back up into the top half of the list, Anna Bligh facing plenty of problems but also with a float to sell and a troubled Opposition, while the news remains consistently awful for her southern compatriot, who is by now surely tempted to raise the middle finger to the umpire and storm off the mat in the finest Tunisian-Australian wrestling tradition.

Don’t tell anyone, but the acting Prime Minister is a Queenslander. I’m sure everything will be ok.. 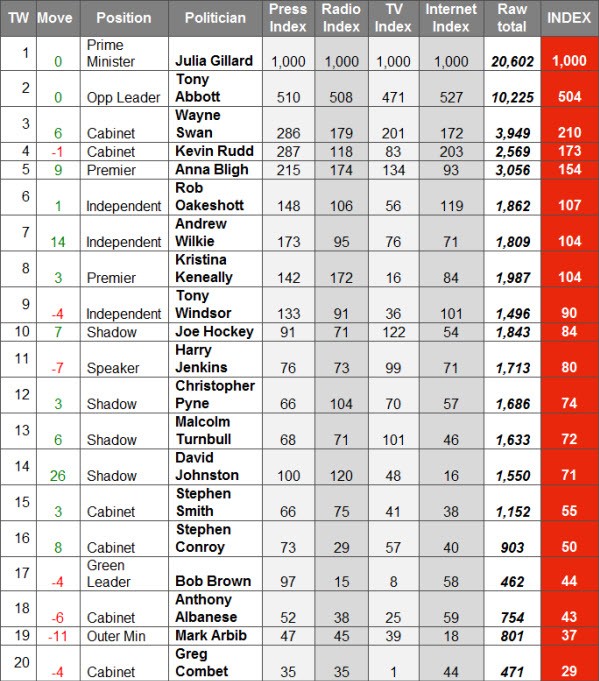 Tony Abbott has copped a bit of a dusting by callers in the past few days, but no-one has come out of this issue with the glowing approbation of the talkback audience.

The Commonwealth Games continue to entertain in almost as many different and colourful ways as a Bollywood epic.