And the Wankley goes to… The Oz’s war on everything (bloggers, this week)

We know that uttering the names James Massola and Grog's Gamut is probably enough to send even the most hardened media watcher into the foetal position, so consider this as Crikey putting a line underneath the storm in a Twitcup that is Grog'sgate.

We know that uttering the names ‘James Massola’ and ‘Grog’s Gamut’ is probably enough to send even the most hardened media watcher into the foetal position, so consider this as Crikey putting full stop on the storm in a Tweet cup that is Grog’s-gate.

For those who came in late, we best run through the details: the whole furore began when Massola, online reporter for The Australian, outed anonymous political blogger Grog’s Gamut in the paper’s influential Media section as Greg Jericho — a public servent working in the film section of the former Department of Environment, Heritage, Water and the Arts.

The Twitterati — of which Grog is a prominent member — was outraged. Massola began to feel the full fury not long after the story hit newsagents and computer screens around the country. Social media became the main battleground for the war, which saw stablemates including Matthew Franklin, Scott Murdoch, Samantha Maiden and Ben Packham come out in defence of Massola’s story. 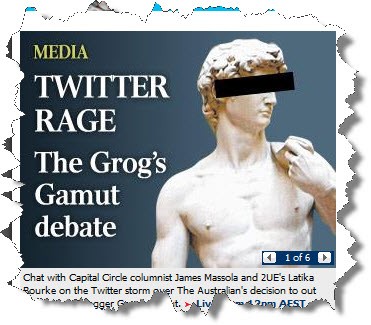 Astoundingly, the journo, who has barely been in the job for six months, subsequently followed-up a few hours later for a piece online, where he reported — in true hard-news, third-person style mind you — that his outing of Grog had unleashed “a firestorm of protest on Twitter”.

It will come as little surprise to many that Grog was eventually outed. The Australian has been musing about the identity of Grog’s Gamut for some time, particularly after he gained notoriety last month for a blog post criticising the media’s role during the election campaign. Crikey understands pressure came from on high for journos to out the influential Grog, with no one coming forward until Massola’s exposé on Monday.

Whatever your thoughts are on the ethics or newsworthiness of the tale — and it seems like everyone has a view — the way The Australian has run with the story can only be described as unbecoming of a national broadsheet.

As if publishing the original yarn with Media Editor Geoff Elliott’s sanctimonious justification wasn’t enough, The Oz then followed up with an editorial — in which they described the revelation as “good for the internet” — as well as a piece from Christian Kerr (aka Crikey‘s ‘Hillary Bray’) and a farcical ‘why I done it’ defence from the man himself. There was also a supplementary piece in the following day’s edition, which breathlessly reported that a journalist — see Massola — had been threatened over the story.

How a Canberra blogger, who’s readership — while important — is still relatively small, is worthy of such a continuous stream of reportage in this country’s supposed quality broadsheet is beyond Crikey’s comprehension. The Oz will argue that the outrage vented on Twitter is justification enough, that it was worth the story.

But whether you think Massola’s original yarn is news or not, what’s Wankley-worthy is the furore that has been created, beaten up and fueled by The Australian. From the outside it appears as though the paper’s editors have used one of their green reporters to incite a debate — worthy or not — and then sat back and hung him out to dry as they feed off the fury. Bravo, Holt Street.

*As Crikey goes to press the “Grog’s Gamut Debate” continues over at The Australian, with Massola, Elliott and Fairfax Radio’s Latika Bourke discussing the story on the paper’s website.

Free speech at risk as Google embroiled in ‘nym wars’

Simons: Grog the mockingbird is back … and that’s a good thing

Nothing like the self-importance of making yourself and reactions to your actions the story. I think the Oz seriously believes it is a “key player” in democracy.

To quote Monty Python – “Well I didn’t vote for you”
I expect that the editors at the Oz or perhaps “Democrazies First Protectorate” as they think of them selves, would reply
“Of course not you don’t’ vote for members of the DFP, it was divine providence….”