When pressed, Abbott discovers he has a pair

Refusing to grant Simon Crean a pair so he could address the National Press Club today was not such a good idea by Tony Abbott.

Upset Labor but not the journalists. No doubt it fitted in with the policy of vigorous opposition espoused by Opposition leader Tony Abbott, but refusing to grant Simon Crean a pair so he could address the National Press Club today was not such a good idea.

Making life difficult for Labor is one thing but upsetting the masters of the parliamentary press gallery was quite something else. It did not take long after regional affairs minister Crean told the NPC he would have to cancel his well-advertised appearance for the tough guys of the Liberal Party to change their mind.

Going in a different direction. In the United States and the United Kingdom this week advisers to central banks have been talking about the need for further economic stimulus. Meanwhile, at home the talk is all about the Reserve Bank stepping in to curb growth. The Crikey Interest Rate Indicator, for example, gives a 69% probability to official interest rates being lifted by 0.25 percentage points when it meets on October 5. 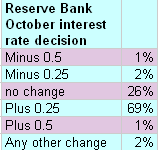 Dictatorship? We don’t give a toss, actually. The foreign minister might regularly go tut-tut about Commodore Frank Bainimarama and his illegal hold on power in Fiji but ordinary Australians apparently don’t care too much. Figures out from the Australian Bureau of Statistics this morning show that Australian visits to Fiji have grown by an average of 10.3% a year from 1999-2000 to 2009-2010. That’s only just behind the 13.5% growth rate of tourism to China and 11.3% to Thailand.

The workers are revolting. Austerity measures are all very well and good for the financiers of the world but they are not much fun for those thrown out of work because of them. Perhaps the most interesting aspect of the tough measures being imposed in Europe as governments struggle to rein in budget deficits blown out as part of the global financial crisis is just how subservient the workers have been as their jobs disappear. But now, it seems, the revolt is beginning.

The BBC reports this morning that thousands of people from across the EU are expected to march in Brussels to protest against sweeping austerity measures by many national governments. The European Trade Union Confederation says its protest could be one of the biggest in Belgium’s capital for years.

According to the BBC, the union says EU workers could become the biggest victims of a financial crisis set off by bankers and traders. A general strike against cuts is expected in Spain and protests are also due to be held in other EU states.

In Greece and the Republic of Ireland, unemployment figures are at their highest level in 10 years, while Spain’s unemployment has doubled in just three years. In Britain, the government is planning to slash spending by up to 25%, while France has seen angry protests against a planned increase in the minimum retirement age.

Sculpting a pylon. American architects Choi+Shine won an award from the Boston Society of Architects for this different approach to electricity transmission towers that they designed for Iceland’s power authority. 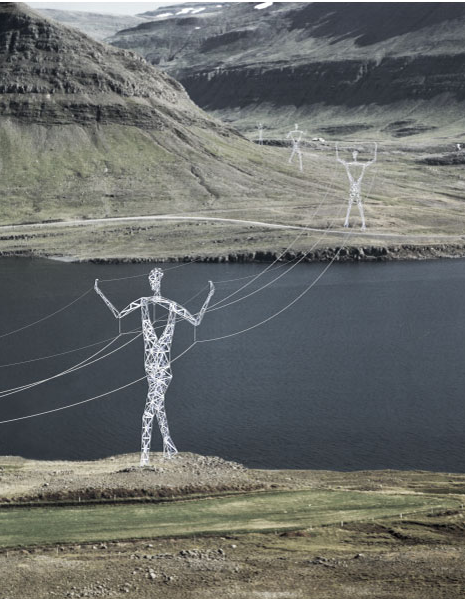 The firm describes its design as transforming mundane electrical pylons into statues on the Icelandic landscape by making only small alterations to existing pylon design.

Wow. Those pylons are fantastic! 🙂