The letter, from renowned Sydney media eagle Mark O’Brien, obtained by Crikey, details the guts of Duffy’s claims against the program, which it says defamed him by casting doubt on the legitimacy of the yarn. Duffy claimed to have bought a “detonator device” from a Delhi proprietor “out of a car boot” and then apparently smuggled it through a security gate near the Games’ main stadium. 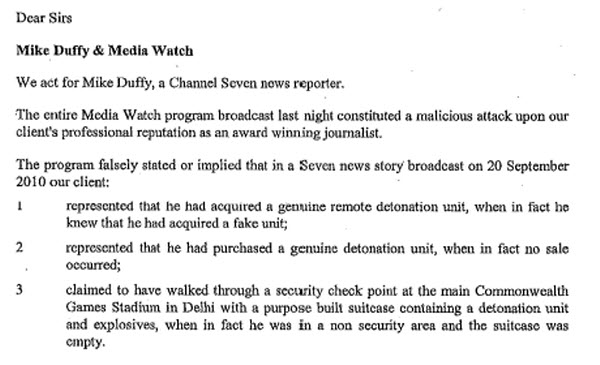 There are at least three aspects to the Duffy report that are contested. O’Brien draws attention to Media Watch‘s claims that the detonation device obtained by Duffy may have been fake, whereas Duffy maintains that it was in fact a genuine device. The letter also claims that the device was actually bought for $4,000, a claim contested on the ABC program.

Media Watch also suggested that when Duffy walked through the checkpoint, which was actually a traffic barrier, there was actually nothing in the suitcase — instead it was just the casing for the detonation kit rather than the kit itself. But the letter says that the suitcase did contain “genuine detonation components”, but curiously adds that “there was no suggestion that the suitcase contained explosives capable of being detonated.” He says the checkpoint was, in fact, genuine.

Media Watch says that the detonation control kit, if it were to be used, required an orange detonation wire to connect to the actual explosives. Duffy would have had to stop, unpack the fluoro leads, connect it to the detonator and then connect it to the target of the explosives. The program also makes the point that there is currently no such thing as a wireless detonator, although Orica is believed to have developed a prototype which was well out of Duffy’s reach.

And far from the spontaneity implied by the “car boot” line, Media Watch said the device was obtained in less than spontaneous fashion, after between three and four weeks of negotiation with the proprietor, Mr P.

Finally, there was the covert cash handover video shot in the front of a vehicle, presumably designed to make the transaction appear shifty, when in the previous scene, the two men were shown chatting openly.

Media Watch‘s Paul Barry pointed out Crikey to the voluminous correspondence between researcher Sashka Koloff and Mr P which appears to demonstrate that Seven’s viewers weren’t being furnished with the full picture. In these emails, P says he never even sold the detonator kit to Duffy and that the only item handed over was the padded suitcase, which Duffy said he needed to transport valuables back to Australia.

Last night, A Current Affair sank the knife into its rival in customary fashion and the topic was broached this morning on the ABC News Breakfast newspapers wrap, with the next Member for Hotham and current Minter Ellison lawyer Geoff Lake dissecting the controversy on the couch with Virginia Trioli and Paul Kennedy.

O’Brien may be on slightly firmer ground over some of Barry’s descriptions of the report as “laughable” and a “shocking beat up” which could be construed as an attack on Duffy’s character. But whatever happens, the ABC would be extremely unlikely to settle, with Barry telling Crikey that he would be “surprised if they sue and very happy to see them in court.”

Media Watch has been forced to apologise in the past, but if the case goes to trial, then it would be up to a jury to cast judgement and lead to a sure fire media circus that could end up tarnishing the network.

Crikey contacted Mark O’Brien — who has represented luminaries like Rene Rivkin in the past — for comment on this story but we didn’t hear back before deadline.

O’Brien’s Obama scoop leaves Speers out in the cold

Media is Growing up in a to fast .And where ever any one miss happening have done than they will show on the same day and a same time.
http://naturacleansesite.com

‘Dear Sirs’? The Executive Producer, Lin Buckfield, is a woman…

So is almost everyone else that works on the show!

Welcome to the new paradigm, where it’s the 1950s all day every day.

Mike Duffy just blows me away…

I saw media watch…Duffy did nothing in his report that proved his point. Was he actually in India?