Housing: if it walks and looks like a bubble, it’s a bubble

The Reserve Bank of Australia and its acolytes continue to staunchly dismiss the notion that Australia is in the midst of a property price bubble.

The Reserve Bank of Australia and its acolytes continue to staunchly dismiss the notion that Australia is in the midst of a property price bubble. Australia’s largest lender, the Commonwealth Bank, launched a strident defence of the housing market earlier this month, while the HIA and real estate bodies point to detailed reasons as to why “this time it’s different”. But as self-serving market participants continue to come up with excuses as to why there isn’t a housing bubble, ultimately, if the investment returns say it’s a bubble, then it’s a bubble.

There were also plenty of reasons claimed during the dot.com boom as to why companies with no profit and minimal revenues should be worth billions of dollars, or why during the height of the bubble époque that financial engineers such as Babcock & Brown and Allco traded on sky-high earnings multiples based on manufactured yields paid from capital. Ultimately cash flows don’t make mistakes — people do.

Residential property yields in most Australian capital cities are less than 3% on a “net” basis (that is, the gross rental return less all real costs of owning a property, like rates, management fees, maintenance and importantly, depreciation). You can receive a return of almost 7% by putting your money in a term deposit (guaranteed by the Government). That means and investor will receive a significantly lower rate by purchasing a property (which is subject to a wide array of risks) than they would a near risk free bank account.

Bubble denialists have a range of excuses as to why house prices aren’t over-priced. Harley Dale, an economist with the Housing Industry Association, claimed in the Financial Review that “Australia is not facing a house price bubble. And those who control the flow of money agree there is no bubble. The Reserve Bank … does not subscribe to the bubble view, nor does Treasury.” Aside from the fact that any genuine economist wouldn’t outsource their opinions to a central bank, the US Fed and Treasury, including Fed boss Ben Bernanke, were equally ebullient about the US housing market. In 2005, Bernanke claimed “housing prices are up a bit, but it’s important to note that funadmentals are also very strong, we’ve got a growing economy, jobs, incomes, we’ve got very low mortgage rates, we’ve got demographics supporting housing growth, we’ve got restricted supply in some places, so it’s certainly understandable that prices would go up.” In 2006, Bernanke then said a house price crash was a “pretty unlikely possibility.” Since then, US house prices have fallen by upwards of 40% in many areas.

Then there was the Commonwealth Bank’s presentation to investors earlier this month. Among their arguments the CBA claimed that there is no bubble because the loan-to-valuation ratio in Australia (that is, the percentage of debt compared with the house price) was only 43%. This is a self-serving argument — the reason why the average LVR is only 43% isn’t because housing has become less risky, but rather, because prices have increased. If prices fall by 50% (to return to historical disposable income-price ratios), suddenly the average loan-to-valuation ratio will be 86%. More importantly, the ratio of mortgage debt to GDP has rocketed in recent years from around 30% in 1997 to almost 90% now.

The CBA conceded as much, noting that Australia’s household debt is world-leading, and far higher than the US, Canada, German and Japan.

Even now with low unemployment and interest rates, Fairfax reported today that “credit profiler Veda Advantage said 2.1 million Australians, or 17%, found it difficult to make repayments this month, because of years of rising home prices and heavy gearing”.

Another excuse claimed by housing bulls is Australia’s low level of public debt (considered to be about 20% of GDP). Ostensibly, this figure is far lower than the US (which has public debt-GDP of about 90%, or Japan, which, after decades of stimulus and boondoggles, has a debt-to-GDP ratio of almost 200%). However, as Karen Maley observed in Business Spectator, public debt levels can change very quickly. The best example of this is Ireland, which like Australia, experienced a substantial housing boom. Since Ireland’s 2008 housing crash (where prices have fallen by up to 50%) “Irish government debt is expected to climb to close to 100% of GDP by 2012, compared with 25% before the onset of the financial crisis.”

Maley then noted that “many blame the Irish government’s decision to extend a two-year blanket guarantee to cover all the deposits and debt liabilities for the country’s current financial woes. The Irish government’s losses on Anglo Irish Bank are now estimated at $33.7 billion — or close to $7550 for every man, woman and child in the country”.

Like Ireland before the housing crash, Australia currently has minimal levels of public debt but a very over-priced housing market, which has been inflated largely due to increased bank lending.

If Australian property prices fall by a similar quantum to Ireland’s property depreciation (and according to many experts such as Morgan Stanley’s Gerard Minack or GMO’s Jeremy Grantham, this could occur), the substantial private debt held by households (and the big four banks) may be transferred to the Government (this will most likely occur by the Government guaranteeing the debts of the major banks, all of whom own a substantial proportion of their asset base in the form of residential mortgages).

Even now, Australian household debt is world-leading (in a bad way) when compared to GDP (amounting to more than 100% of GDP) this is a higher amount of debt that the US (as this graph produced by Steve Keen shows). 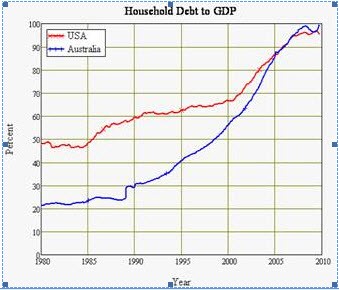 So while record tax receipts (largely spurred by a mining boom and low unemployment) and privatisation of large public assets have allowed Australia to reduce public debt, households are leveraged to the hilt, with a great deal of those monies used to bid-up the price of the unproductive housing asset base.

So don’t rely on the RBA, or the CBA or economists for building unions claiming that housing isn’t over-priced. For so long as yields are almost non-existent, and the ratio of house prices to disposable income is double its historical level — if it walks like a bubble, and looks like a bubble — you can rest assured, it’s a bubble.

Crikey Clarifier: what exactly is a property bubble?

Adam, I’m one of your biggest fans and keep up the great work with the housing bubble pre-coverage but this argument is a little thin: ” You can receive a return of almost 7% by putting your money in a term deposit (guaranteed by the Government). That means and investor will receive a significantly lower rate by purchasing a property (which is subject to a wide array of risks) than they would a near risk free bank account.”

That’s assuming any gain is only from the yield of an asset, which is true of bonds and savings accounts but not on equity in property or stocks. With the later there are dividends and capital appreciation. And the reason people are tripping over themselves to place money in the property market, which we both agree is a false premise, is that home owners and property investors are chasing capital gains.

So capital gain + net rental yield has to be greater than risk free savings rate, which obviously in places like Melbourne it generously is at the moment.

I wholeheartedly agree with all the bias of those insisting there is no housing bubble. One other factor on the other side of the coin and why there are little negative bias opinions being thrown out there is that Australia has little mortgage securitization so investors cannot place bets for a decline via credit default swaps and hence profit directly from it. Betting against the banks is a close but still indirect way of betting against the housing market.

It’s worth noting that the term deposit and bank guarantees expire in October 2011, after that there is no infallibility.

Adam’s message was that the capital gains which you refer to may/will become capital losses when/if the bubble collapses.

I receive over 6% via an at-call account with a major bank. It’s going to stay right there for a while. As for betting against the banks via mortgage securitisation short sells… it’s for the birds. Didn’t we learn something about the desirability of this practice during the past year or two.

All it would take for the bubble to collapse is for capital gains form property to be taxed as for income via personal exertion. The scams which prop the housing industry up would collapse overnight and people would suddenly develop an interest in smaller, less ostentatious and wasteful homes.

Niki S, the problem is when the music stops ie asset prices stall, investors can’t see future capital gains and then start to sell. It won’t take long as rates start to rise, buyers baulk at taking on ever higher debt levels and then it’s all down hill. Investors will be the first ‘out the door’, and being a fairly big segment of the market, they can easily have a pretty sudden and drastic impact on the price.

Keen’s model of GDP growth being directly linked to the rate of increase in debt shows just how fragile this Ponzi scheme is when the rate slows, let alone goes negative as it’s doing quite dramatically in the US.