Twitter: it's a minefield for people in the media who don't take the time to check their information. But mis-attributing quotes from a fake account to one of your own star columnists? Plus, NT News gold and other media news.

The Oz has a Bolt loose. Twitter: it’s a minefield for people in the media who don’t take the time to check their information (hello Richard Wilkins). But mis-attributing quotes from a fake account to one of your own star columnists? Surely not at that national broadsheet of record, The Australian.

In responding to the Twitstorm that erupted after James Massola outed blogger Grog’s Gamut in the paper’s Media section yesterday, The Oz decided to list comments from some of the more notable Twitterati. There was NYU lecturer Jay Rosen, ABC political writer Annabel Crabb and, hang on a second, ‘News Limited columnist Andrew Bolt’?

Andrew Bolt? Surely it couldn’t be; didn’t the man himself come out a while back and brand the Twitter account bearing his name as a fake? Yes, he did. So how did a tweet, which sounded like a clear tongue-in-cheek rip at News, make it into print falsely under a stablemate’s name? We’re not sure, but we reckon some bright spark at Holt Street has got some ‘splainin’ to do. — Tom Cowie

The science of popular news. Ah, the most read lists on newspaper websites! However did we get on without them? The Age of Melbourne can usually hold its own against the Sydney Morning Herald (‘Auditor-general’s report reveals issues of concern’ vs ‘Brangelina lookalikes snort coke off naked yoga teacher’), but for sheer appetite for tedium you can’t beat the Grauniad: 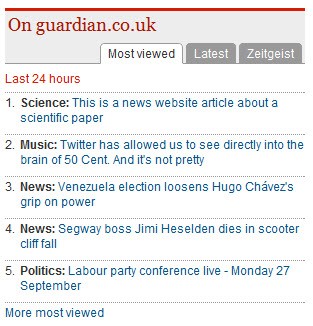 Someone call in human services. Yes, it’s the NT News once again with some more hilarity from the letter pages. Today’s gold comes from the paper’s ‘txt the editor’ section, where readers can send in their views on the issues that matter:

The next Republican president? Someone on Fox News

“With Sarah Palin, Newt Gingrich, Rick Santorum and Mike Huckabee all making moves indicating they may run for president, their common employer is facing a question that hasn’t been asked before: How does a news organization cover White House hopefuls when so many are on the payroll?” — Politico

“Google has been convicted of defaming a French computer user after the Internet technology giant linked his name to the word “rapist” in automatic web searches.” — Telegraph.co.uk

“Katz and Kanin are the youngest staff cartoonists in the New Yorker’s 85-year history and their cartoons described above are prime examples of the jarring hilarity you can find printed in the New Yorker despite what popular prejudice may tell you.” — Splitsider

Just what does it take to be a foreign correspondent?

“Three months after arriving in Jerusalem to be the Guardian’s correspondent here, I was finally issued with a visa, work permit and permanent press accreditation. It feels like a major achievement.” — The Guardian

Bar codes on TV the next big thing

“From the comfort of their sofas, mobile-phone users can scan a bar code embedded in commercials on certain evening shows on Bravo and instantly obtain additional information about a product and a discount to buy it.” — New York Times

If you actually read the Guardian Science article you’ll see that it is a very clever satire of what passes for science journalism these days.

Drinder: exactly! I read that article yesterday in the Guardian and it’s pretty funny. I was thinking afterwards that Fairfax could do well to publish it in a saturday paper. Hard to believe that “Kim Serca” didn’t check it. With respect to him/her, that’s just thick.

The Politico article is a must-read – just when you think News Ltd’s power is excessive, they go further. Basically because all four are on the Fox News payroll, any other network wanting to interview them has to get approval from Fox. Which Fox routinely refuses. Result – they’re only seen on soft-ball interviews on Fox – no independent and tougher TV interviews.

Thanks Grinder & Peter Evans for pointing out that the article was a satirical meta narrative of bad science journalism.

It appeared on the front-page of Fark a couple of days ago, inspiring a self-referential comments thread about comments threads and the article must have gone viral from there.