Oprah House to honour activist? The CFMEU is understood to have contacted Oprah Winfrey through the International Labour Organisation to ask her to accept a plaque during her forthcoming Sydney Opera House performance. According to backstage rumours, it will commemorate the 1960 visit to the building by the legendary black American singer and human rights activist Paul Robeson. At the time […]

Oprah House to honour activist? The CFMEU is understood to have contacted Oprah Winfrey through the International Labour Organisation to ask her to accept a plaque during her forthcoming Sydney Opera House performance. According to backstage rumours, it will commemorate the 1960 visit to the building by the legendary black American singer and human rights activist Paul Robeson.

At the time the Opera House was in the early stages of construction. Even so, Robeson gave an impromptu concert for the workers. His performance has been recorded as the first by a great artist at the Opera House. He certainly set a trend. Peter, Paul and Mary were among other visiting artists who performed on site for construction workers. During his 1960 ABC tour, Robeson also met with Aboriginal people and took to the stage to speak out about their appalling living conditions

Spin on digger injury. I was holidaying in East Timor and this medico mentions how an Australian soldier fell drunk off a cliff in Baucau and was brought into Dili for treatment. Then he hears on the Australian news that a balcony collapsed and the heroic digger was injured. Easier to blame shoddy third-world standards than drunken Aussie idiots?

Recriminations in WA Libs. In response to Friday’s Crikey edition, Liberal Party Western Australian director Ben Morton made it abundantly clear to staff at Menzies House that he has no intention of shifting back to NSW and he is 100% committed to his current role. This forced Ben Allen into a comical backpedalling exercise, which culminated in Allen re-pledging his loyalty to Morton.

Influential players within the party are understood to be greatly amused by Allen’s behaviour, especially given that he has been a member of the party for less than two years and is not a serious contender for the state director position in any event. Within the WA division, the suggestion that novice campaigner Allen was in anyway responsible for the strong marginal seat performance during the election is considered to be laughable and disrespectful to the quality field of liberal candidates that stood in WA.

Despair at cosy NT relationships. I live in Darwin, and I live in despair. Increasingly our media — namely the News Limited-owned NT News — lies in bed with an inept and nepotistic government. I could tell you more but since I have to work in this town, I can’t.

I hope someone somewhere starts looking at the contracts that exist for media — i.e. taxpayer-funded stories that are favourable to government and/or support their initiatives — that run regularly in the NT News and directly benefit their circulation on days when their circulation is dismal. And how the NT News is calling the shots in some government departments: seeing people are removed from the administration of said contracts because they are “difficult” to work with. And how senior public servants previously working in the Department of the Chief Minister, who’ve resigned while under investigation, are now contracting back to government and running marketing campaigns in the pages of the NT News and being paid handsomely for it.

Is this normal? When I look at NSW politics, I think maybe it is. What’s happening up here is going unreported, because the people who are supposed to be reporting it are part of it. They are the town bullies, not lovable larrikins who write far-fetched headlines that are lauded on Media Watch. Is there anyone out there who is brave enough to ask the hard questions?

Going after net thieves. There looks to be an interesting story unfolding in the world of Big Media versus the internet. UK law firm ACS:Law has been sending out legal nastygrams to all and sundry for a while, catching innocent and guilty alike and making plenty of enemies with heavy-handed tactics accusing single mothers and pensioners of downloading everything from movies to gay p-rn. A few days ago its website was taken down in a DDOS attack, and when it came back online it accidentally made available 350MB of emails and passwords that are now being scattered far and wide across the internet.

Tiger slow off the mark. My wife and daughter were on the 9:50am Adelaide-to-Melbourne Tiger (yes, they should know better) flight on Saturday (luckily to go to the ballet in the evening, not the AFL grand final) along with lots of football fans.  The early flight was four hours late and police were called to the gate when it finally left to go to Melbourne before returning to pick up the 9:50 passengers  They were told “mechanical trouble” caused the delay. They finally arrived in Melbourne about 2:50pm — with 14 passengers having gone missing, either getting other flights or lawyers.

A US Department of Defense source writes: So we’re out here at Bagram, and the DFAC (that’s “dining facility”, apparently, US Milspeak for “cafeteria”) contractor put out a menu flyer advertising the USAF’s birthday dinner. Take a close look at the fighter in the background of the flyer: Steamship round for 2000 people: $1947. Assorted pies for AF Birthday party: $1069. Putting a Communist Chinese F-10 fighter on the USAF birthday announcement: Priceless. But that last line? A “Beef gravy / ice-cream bar”? WTF? 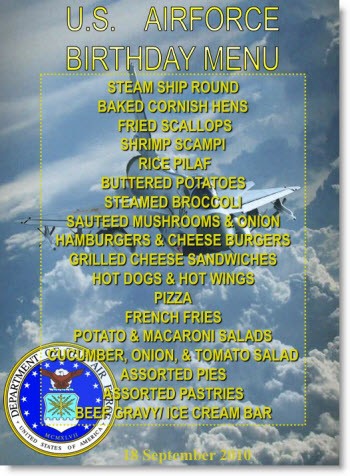 Oprah’s been and gone but diamonds are forever