Wolfmother gets schooled by the last frontier of Marlboro Country

Wolfmother has been told to play at a tobacco-sponsored and "do it for the fans".

From October 8-10 at Jakarta’s Ancol Beach, the Gudang Garam cigarette company is the major sponsor of what promises to be the largest and highest-profile music festival ever seen in the country — Java Rockin’ Land.  Among the line-up supporting the lead act, the Smashing Pumpkins, are Wales’ Sterophonics, Australia’s Wolfmother and The Vines, and bands from several European countries.

Following calls this week for the bands to either pull out or demand that the tobacco sponsorship be dropped, Wolfmother’s frontman, Andrew Stockdale, posted a notice on the group’s fanpage saying:

“With the severity of the issue of smoking in Indonesia, I completely understand that bands playing with promo girls handing out cigarettes isn’t going to help kids stop smoking in Indonesia. So it is without hesitation I will now announce that we will be cancelling our headline show at Java Rockin’ Land on the 10th of October 2010. We are very regretful to miss this opportunity to play to our Indonesian fans, though hopefully in the not too distant future we can do more shows under different terms.”

Wolfmother’s name disappeared from the festival website yesterday. But overnight it’s back up and it seems its management has put Stockdale back in his box. “This one is for the fans in Indonesia who have parted with their very own cold hard cash to see Wolfmother. We realize their (sic) are sponsors and we neither support or condemn the sponsors affiliated with the festival,” says the new notice.

If you click on the festival website and select “international” the terms and conditions tab shows A-S conditions. The “S” was added this week when the troubles began. It reads: “One or some stages are sponsored by tobacco company and therefore audience below 18 years old or pregnant woman are not allowed to enter the show.” But if you click on the Indonesian entry portal, the “S” condition is missing (see screenshot). Western sensibilities about the tobacco-sponsored festival being adult entry are thus cynically catered for, but in reality, kids are welcome and get half-price tickets. 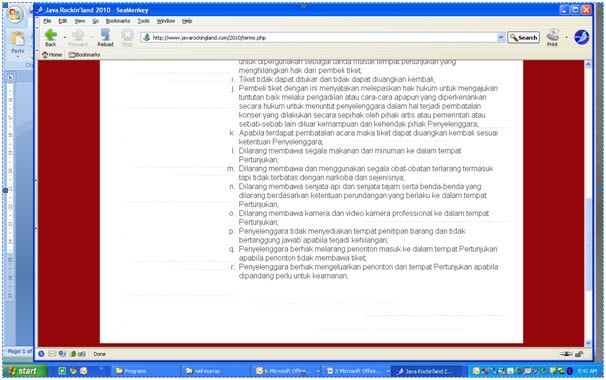 The new Wolfmother statement contrasts with the action taken by American singer Alicia Keys, who, in 2008  refused to play a Jakarta tobacco gig, unless all sponsorship and marketing by Philip Morris’ Sampoerna brand was stopped. She got her way, as did American Idol winner Kelly Clarkson this year when she sang there.

There are 171 nations that have now ratified the  World Health Organisation’s Framework Convention, which requires them to end all tobacco advertising and promotion. Indonesia has more than 73 million smokers, 95% men. About 66% of men smoke, a rate not seen in Australia since the 1950s. The country is one of a handful of mostly basket-case nations (such as Somalia, Malawi, Zimbabwe, Uzbekistan and the US) which have yet to ratify the FCTC. Indonesia has virtually no tobacco control policies or significant education programs.

British American Tobacco (Bentoel) and Philip Morris (Sampoerna) are massively engaged in Indonesia, a kind of last frontier of Marlboro Country. Despite repeated unctuous statements from both companies about their corporate social responsibility and not wanting youth to smoke, they are frequent sponsors of youth-oriented music events.

Factoids and legal bollocks in war against plain packaging

Maybe Wolfmother was threatened with having to pay high damages for breaching its contract.

Off-topic I know, but in 1986 I saw a ‘black’ copy of a superb faux Marlboro ad which had been suppressed legally by the Marlboro lawyers. I’ve never been able to locate a copy since; but if anyone knows the whereabouts of one, I’d be interested, although it may not be advisable to place details on a website?

Norman, not sure what you mean .. but I have a black (African) Marlboro Man ad in a cowboy hat etc .. it was never surpressed to my knowledge. Can you describe it more?

Wolfmother (aka Andrew Stockdale) are the biggest tools in the music industry. Mike Patton was right. The fact that they are feted at the ARIAs and for a while, even by triple J (who thankfully seem to have dropped them from their playlist) goes to show how mainstream music in this country sucks. I can’t wait until really great bands like Birds Of Tokyo, Tame Impala, Children Collide and British India are recognised and given their due. In comparison, Wolfmother are turgid trash.

Thanks, simon, but it was ‘black’ only in the sense of being illegal to screen it — or even own a copy. That’s why I said that perhaps it wasn’t a good idea to post details on the website. Most of the original copies had disappeared by ’86 because of legal action by Marlboro.

The ad was a masterpiece, using cowboys from the original marlboro ads who were suffering from cancer and riding the range with oxygen equipment attached to their saddlebags. Marlboro’s lawyers served lawsuits, including one on a cowboy which they promptly dropped when he died from lung cancer. Wasn’t that a touching concession?