Is Telstra Smart? … the psychic croc …

As tipped by Crikey yesterday, Telstra is getting into the old-media publishing business with a new magazine for small to medium business owners -- Smarter Business Ideas. The Age's study in irony and other media news.

Telstra gets Smart with business. As tipped by Crikey yesterday, Telstra is getting into the old-media publishing business with a new magazine for small to medium business owners — Smarter Business Ideas. The deal with ACP Magazines was announced yesterday — a “jargon-free advice, business solutions and real-life case-studies for Australia’s small and medium enterprises”.

It’s a strange move in many ways — Fairfax’s business weekly BRW has long knocked on death’s door, while titles targeted at smaller enterprise like Anthill have cut their print runs. But the telecommunications giant has a significant database to play with — more than half a million copies will be printed from the first quarterly edition in Feburary, dispatched to Telstra’s pool of business customers. “Smarter Business Ideas will reach more Australian businesses, right from its launch date, than all other business magazines combined,” a press release boasted. ACP deputy group publishing director Gerry Reynolds says research revealed a niche “not currently being met”. — Jason Whittaker

NT News watch. The Northern Territory’s “most famous psychic croc” (are there others?) is back — and like the federal election, he’s picked the winner of the AFL Grand Final. It’s the Pies by plenty… 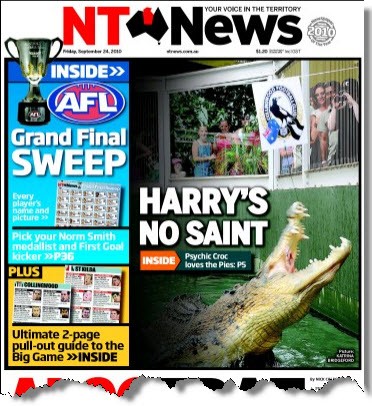 It was only a matter of time, really. Here at Crikey we have a fondness for the “gate” suffix, but thanks to the Daily Tele online we’re starting to think it’s time to put the criminally overused cliché out to pasture… 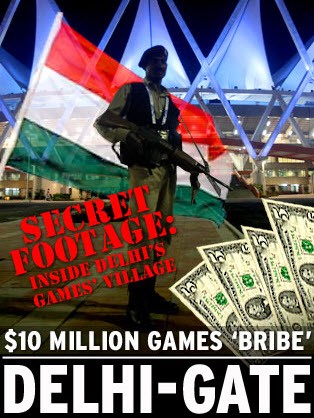 The Age‘s study in irony. It was an opportunity too good to miss — a close-up picture of a woman’s breasts directly below the theage.com.au masthead is sure to bring in the readers — but have they actually read the article? 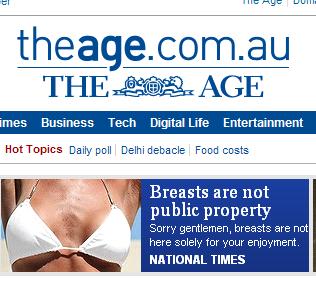 “Leonard Downie Jr, the former executive editor of the Washington Post, has attacked online news aggregators including the Huffington Post as ‘parasites living off journalism produced by others’.” — The Guardian

“Al Jazeera has accused NATO of attempting to stifle its coverage of the war in Afghanistan after two of its journalists were taken into custody by coalition troops this week.” — The National

“A Mexican journalist who was the target of death threats like those made by drug cartels says he has been granted asylum in the United States in a case believed to be the first of its kind since the country’s bloody drug war began.” — Fox News

Has the paid-content bogeyman lost his bogey?

“Has the paid content bogeyman lost his bogey? Is it OK for nonprofits and local startups to charge for content, but evil for ‘legacy’ media? Are people just beginning to get a little more sophisticated in their understanding of the issues?” — yelvington.com

“Harrisburg University of Science and Technology in Pennsylvania has banned social networks such as Facebook and Twitter from campus. The week-long black out that began September 13 is an experiment designed to make students live a life without social networking.” — The Mirror