The public is surely in a mood to concentrate on football grand finals rather than politics.

A quiet Prime Minister. It has been a relatively quiet Prime Minister since the swearing in of the new Labor ministry and a good thing too. After an election campaign that lasted nigh on eight months and then another month of haggling over who actually won, the public is surely in a mood to concentrate on football grand finals rather than politics.

And as Julia Gillard thinks about her approach to what will be the very testing time of being a minority leader I hope that when she does find it necessary to break her silence that she abandons the courtyard scramble approach of her immediate predecessors and actually holds a formal press conference.

A nice test for a new boy. When federal government financing of sport was taken away from the health department  by Julia Gillard and added to Prime Minister and Cabinet it was no doubt considered within the Labor Party to be a fitting perk with which to reward Mark Arbib for services rendered in the overthrow of Kevin Rudd.

With the Commonwealth Games in Delhi now on the brink of being one of sport’s all time great stuff ups, being Sports Minister takes on quite a different complexion. 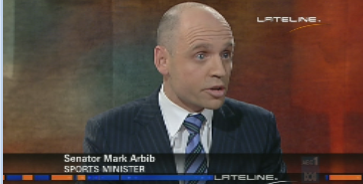 Minister Arbib now finds himself in the difficult position of saying enough about the dangers of Australians going to the Games to avoid the Australian Government being blamed for not giving people warnings not to go if something does go wrong and the desire not to annoy the government of a potentially great trading partner by saying too much.

It is no easy task and while the new boy has so far handled it well the final political outcome for him is in the hands of Indian construction companies, Delhi’s mosquitoes and Muslim terrorists.

A navel gazing quote of the day. Former BBC correspondent and editor Mark Brayne on how the desire to be seen to be fair now means, after a period between Al Gore’s Inconvenient Truth and the disaster of Copenhagen when global warming was everywhere in the output, that public broadcasters have been bending over backwards to reflect the opposite, sceptical view.

The determination to be “fair” to all sides on all stories can at times go to such absurd lengths that Allan Little, one of our best reporters with hard experience of covering Sarajevo in the mid-90s and much more, speaks of the analogy of two men at a bar, one saying that two plus two equals four, and the other that two plus two equals six. The BBC solution to this disagreement? Put them both on the Today Programme, and the answer clearly lies somewhere in the middle.

Far too serious. After an evening of serious wine tasting I find myself in agreement with the reader who sent me this suggested Quote for the Day:

“I think I have an allergic reaction to leather. I find that every time I wake in the morning with my shoes on I have a headache.”

The myth of not having an opinion. Part of the business for ordinary journalists at our ABC and, for that matter, many other parts of the media as well, is not to directly give their own opinion. In a pretense of impartiality the technique is to ring some academic or other who you know will say what you want said.

It’s “almost a process of laundering my own views” is how I saw one journalist describe it recently and there was a wonderful example of it this morning on the AM program when University of NSW constitutional law expert George “rent-a-quote” Williams was turned to to give this momentous opinion about the speakership of the House of Representatives:

“Look ultimately there’s not going to be a legal answer to this it will come down to negotiations and a political settlement and it may be only resolved on the floor of the Parliament and they may only occur when the Labor Party may be forced to provide a speaker because in the absence of the speaker Parliament simply can’t operate.”

What happened to the Susans? A correspondent has drawn my attention to the absence of women in our list of Crikey election competition prize winners and asks what proportion of the entries actually came from each s-x.

A quick count this morning told me that 19% of entries had what I took to be female first names with another 3% in that category of not being able to tell with male names making up the other 78%.

As to why there were no female winners on our list of 20 I can offer no clue but I can tell you that Susan/Sue/Suzanne is the most common name of Crikey‘s female entrants.

Crikey subscriptions (like their newspaper analog) tend to be ‘Men’s Work’, whereas reading Crikey and entering competitions is done by the female. It my household two women read Crikey, but only one man, yet i’m sure in your poll we would have shown up as Male….

Is it just me, or does Mark Arbib really look like Tony Abbott in that screen grab?