Eleven days out from the Delhi Commonwealth Games and rather than working on the best sporting clichés, the world's media is going for gold examining the current shambles in Delhi.

Eleven days out from the Delhi Commonwealth Games and rather than working on the best sporting clichés, the world’s media is going for gold examining the current shambles in Delhi. And from the “uninhabitable” athletes village with “excrement in places it shouldn’t be”, to the pedestrian bridge that collapsed injuring 19 workers, a roof at the weightlifting centre that collapsed,  and the constant threat of a possible terrorist attack, there is plenty to pick through.

The headlines are damning: “Shame Games”, “Filthy Village Shocks Many; No big deal: OC”, “Call off Games, says NZ envoy”, “India’s game shame growing”, “97% say Games bosses have tarred India’s image.” Don’t think those headlines are from overseas papers — though similar ones are being written — all of them come directly from Indian newspapers published yesterday.

Yes, the biggest criticism for Delhi’s handling — or mishandling — of the Games is coming straight from the Indian media. Have a quick look at some of the nation’s biggest newspapers front covers: 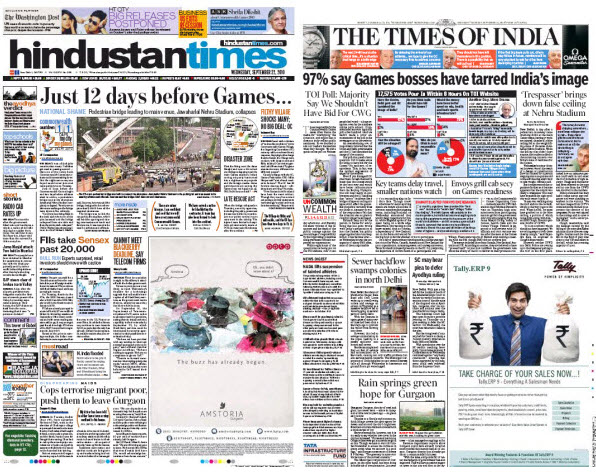 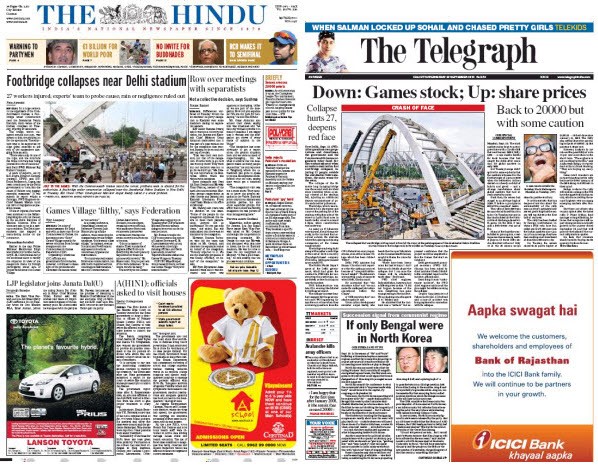 Several papers are devoting entire spreads to the impeding Delhi crisis, such as this one from the Hindustan. It focuses on how the world’s media are asking if the Games will even go on, wraps up the “embarrassing list of Games goof-ups” and discusses how the Delhi government blatantly flouted normal planning procedures to get the bridge cleared in time, before it collapsed in a heap. 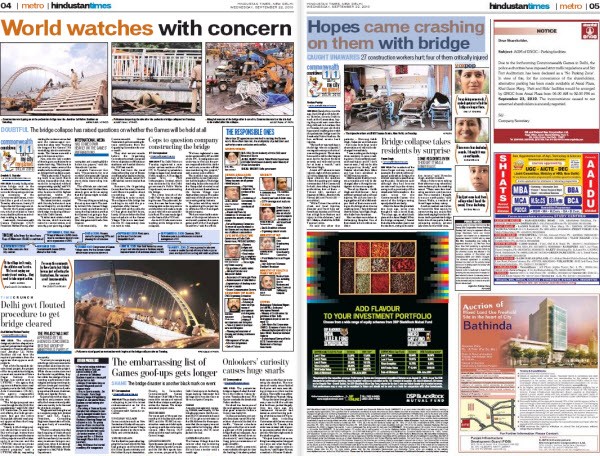 Those responsible for the Commonwealth Games mess often blame the media for ‘overhyping’ the situation, and argue that it does not truly reflect public sentiment. So we decided to ask our readers themselves what they thought. We did a quick online poll on Wednesday afternoon. And frankly, the sheer volume of the responses and the depth of the public outrage against the miscarriage of responsibility by the Organising Committee and government officials surpassed our assessment.

Within eight hours of the questionnaire being put on the TOI website, over 17,500 people had voted — a huge response, even by the numbers online polls attract. (Commissioned surveys typically poll a few hundred.) And we hadn’t made a prior announcement of the poll in the newspaper or on the website. An overwhelming 97% of respondents believed that the Union and Delhi governments and the OC had tarnished the image of the country.”

Unsurprisingly, Indians don’t enjoy watching their chances at international sporting stage glory — a la South Africa’s recent World Cup — come down in a crash of metal and bleeding limbs. An article in Foreign Policy notes: “A popular joke on Twitter about Suresh Kalmadi, chairman of the organising committee and a member of the ruling Congress Party, sums up the national mood: “Suresh Kalmadi tried to hang himself but the ceiling collapsed!” and a quick Twitter search verifies the claim.

One of the most damning articles come from DNA, comparing how far Delhi’s preparations are behind, compared to China’s hosting of the next Asian Games and Poland’s hosting of the 2012 Euro Cup. 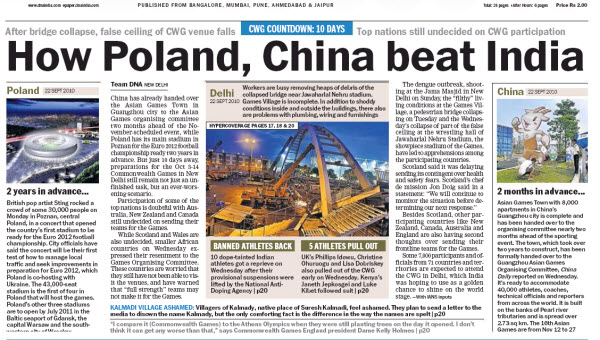 National “shame” seems a common topic of many stories. Two days ago The Times of India cover editorial — titled ‘C’wealth Games India’s Shame’ — declared: “India has been shamed globally — by politicians and officials who have been exposed as callous and inept, and possibly corrupt. TOI has exposed several such cases to warn about the impending mess. But no one, not even the Union government, took them seriously … Who is responsible for the national shame? We know who the guilty are; now bring them to book.”

The Asian Age, with its editorial entitled ‘India’s Games shame growing’, was equally as critical: “The stain is spreading. With just 11 days to go for the start of the Commonwealth Games in New Delhi, it is no longer possible to judge just how much shame and embarrassment a bunch of inept, inefficient and corrupt administrators will heap on this nation’s head.”

Right now several top Commonwealth Games organisers — including Suresh Kalmadi — are apparently missing in action. With just 11 days to go until the opening ceremony, time is running out to turn that shame into national pride.

The real Delhi: not as dirty, scary and chaotic as the media thinks

Commonwealth Games: why New Delhi has no excuse

As tiresome as this debacle has already fast become at least it has removed Rob Oakeshott from the spotlight.

The Times of India’s defence of “media overhyping” makes no sense. Rather than its intent it makes me wonder if these reports are exaggerated.