No-fly zone. Word from a Customs employee is not to fly the first week in November … WorkCover bullying problems … Today’s front-page spread on WorkCover’s problems with internal bullying allegations is only the tip of the iceberg. There are other cases but the problem is systemic and it will take more than an independent […]

No-fly zone. Word from a Customs employee is not to fly the first week in November …

WorkCover bullying problems … Today’s front-page spread on WorkCover’s problems with internal bullying allegations is only the tip of the iceberg. There are other cases but the problem is systemic and it will take more than an independent inquiry to stop the bullying culture that exists.

… and the CEO responds:

A message from the CEO

You may be aware of reports in today’s media focusing on allegations of bullying and harassment in WorkCover’s Licensing Solutions Unit.

In my first address to staff earlier this year I outlined how I wanted WorkCover staff to be aware of the avenues for making complaints of any nature and that they should be free to do so.

I did this to ensure our culture encouraged a safe work environment for all staff.

Today’s article in the Sydney Morning Herald refers to serious allegations of systemic negative behaviours in the Licensing Solutions Unit.

This morning I spoke to staff in the Licensing Solutions Unit. I reiterated the need for WorkCover to be an exemplar employer. To this end earlier this year, the Executive took steps to ensure that bullying complaints by our employees would no longer be investigated by WorkCover to remove any perceptions of a potential conflict of interest.

I believe best practice is that WorkCover should not investigate itself as WorkCover is both an employer and a regulator.

Today the Minister, in response to concerns of allegations of bullying in the Licensing Solutions Unit, has requested that any allegations be conducted independently through the Department of Premier and Cabinet (DPC) engaging an independent investigator.

I am in full agreement.

While WorkCover has been active in developing policies, compulsory training for staff and managers, conducted surveys, established a 24 hour complaints hotline, developed new Corporate Values and sought to improve performance management — there remain allegations of bullying behaviour within this unit.

We need to remove uncertainty around this area or any other part of WorkCover. I will provide details of the review framework and timelines when this is finalised by DPC.

I have also attached a message from the Minister in regard to this matter.

I remind you that complaints can be made to the Bullying Response Service on 1300 080 754.

Online bungles at the ATO. How widespread are the continuing problems with the ATO’s eTax system? I’ve just received my assessment, which failed to reflect my major income source (even though it did appear on the copy I printed for my records). The resulting assessment was I’ve contacted the ATO and have been told (1) that the error in receiving the data I supplied was a “technical” one on the ATO’s part and (2) that the turnaround time for issuing an amended assessment is “up to 21 days” as opposed to the “up to 14 days” for processing initial eTax returns.

Why Kloppers is a bargain. BHP Billiton chief executive Marius Kloppers was paid 9% more to run the world’s biggest mining company with sales of over $US52 billion and profits of $US12.47 billion (a rise of 16%) — that’s $US11.3 million ($11.86 million). The company didn’t get a guarantee from the Australian government or any help. Commonwealth Bank chief executive Ralph Norris received a total of $16.2 million for a 42% rise in profit to $A6.1 billion, and $A18.8 billion in revenue, up 6%. That came because of a fall in bad debt provisions and loan losses and the continuing benefits of the federal government’s guarantees. People might quibble about Kloppers in being paid a lot of money, but compared with Norris, the BHP boss is a bargain.

Don’t read all about it: LNP falling apart, too. It seems The Courier Mail is following The Australian‘s highly partisan political coverage. Serious cracks are appearing the in the LNP opposition’s unity, with three frontbenchers making comments to the media about John-Paul Langbroek’s leadership.  The Brisbane Times has been reporting the story for two days, but you won’t find any mention of it on The Courier Mail website.

Eloquence in action My son’s mate took this photo of a lightpole in Collins Street, Hobart. It hasn’t been photoshopped. As Crikey fans we hope you get a laugh from it … 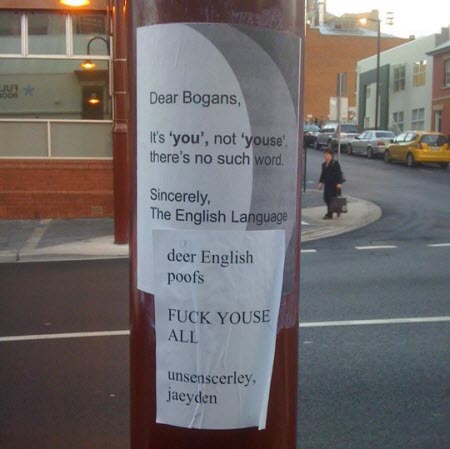 The Oz sued for defamation by former OPI employee

Mass staff exodus at Mowbray College: 22 in one year