An informant at the National Gallery of Australia tells me that there has been a great art heist from the Prime Ministerial Lodge in Canberra.

The great Aboriginal art heist. An informant at the National Gallery of Australia tells me that there has been a great art heist from the Prime Ministerial Lodge in Canberra while the building is without a Prime Minister in residence as it undergoes a little loving care and maintenance work.

It is not just that the very fine examples of Aboriginal art that were displayed when the home was occupied by the Rudd family have disappeared but where they are alleged to have ended up that has Gallery staff talking.

The rumour has it that the paintings have been nicked to adorn the walls of Government House. Surely this could not be so.

At least we are not Greece. Detention centres crammed to the rafters in Australia are not a pretty site but spare a thought for the Government of Greece. While we are one of the world’s economic success stories with a growing economy, Greece is one of the world’s basket cases but it is struggling to cope with 45,000 illegal asylum seekers.

Banning the plastic water bottle. News from Italy that hikers and tourists visiting one of Italy’s most scenic stretches of coastline have been banned from carrying plastic bottles of water amid fears that the area is being “buried” in rubbish. Tourists entering the national park which encloses the Cinque Terre region in the country’s north west will be encouraged to buy one-litre reusable flasks, stamped with the national park’s logo that can be refilled at fountains offering chilled, fizzy and still water along the nine mile long coastline.

Top 10 “unanswerable” questions revealed. The BBC reports that “What is the meaning of life?”, “Is there a God?” and even “Do blondes have more fun?” — are apparently the world’s trickiest questions. Internet search engine Ask Jeeves has compiled what it called a top 10 of “unanswerables” in the past decade based on some 1.1 billion queries made on the site since its launch in 2000:

Finding the frogs. I reported a month or so ago on the search by Conservation International for missing frogs including the Australian gastric brooding frog, last seen back in 1985. Well there is no news yet on our missing little fellow but the mission aimed at rediscovering amphibian species thought to be extinct has yielded its first results elsewhere.

The BBC reported overnight that conservationists have turned up live specimens of two West African frogs and a cave-dwelling salamander from Mexico. 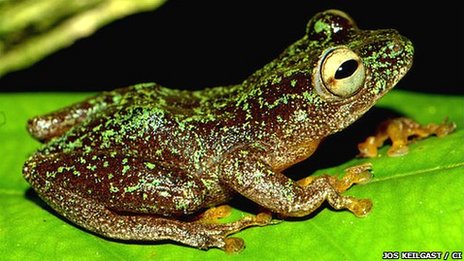 The Omaniundu reed frog was last seen in 1979, until the recent expedition

The Novax solution: when Morrison finds his COVID villain — and scapegoat

As I understand the situation.
The Australian gastric brooding frog, last seen back in 1985, is actually alive and well and currently editing “The Drum”for our ABC.

Re: 10 most asked questions list. Forget Tony Soprano, isn’t anyone curious where Lord Lucan is? And what happened on board the Mary Celeste?

You’ve got to be kidding that anyone actually asks about ‘the meaning of life’.