The modest victory of the Sweden Democrats has gained the attention of the world media, but the real story was the further collapse in the Social Democrat vote.

It’s just a jump to the r.r.r.r.ight … Sweden has become the latest European country to see a social democratic party get a thorough drubbing. In last weekend’s election, the ruling New Moderate Party alliance remained the presumptive government led by current prime minister Karl Reinhardt, gaining 172 seats in the 350-seat parliament. The Social Democrats and some associated parties gained 157, and the hard-right Sweden Democrats gained 20 seats, with 5% of the vote.

The modest victory of the Sweden Democrats has gained the attention of the world media, but the real story was the further collapse in the Social Democrat vote, which fell to near 30% for the first time in a century — a swing against them of 4.4%. The Moderates gained 4%, but the other right parties (the Liberal/People’s Party, the Centre Party, and the Christian Democrats) lost 2.7% cumulative. The Greens gained 2% for a total of 7.2%, and the Left Party lost 0.3% to 5.6%.

Most importantly, it’s the first time since the 1920s that a non-SD party has been re-elected — the previous non-SD governments of 1976 and 1991. Each previous Moderate-led government has come at the point or aftermath of a global recession (the right almost got in in 1973), with Swedes grumbling about high taxes, etc, only to recoil in horror when the Moderates get out the Allen key and start to dismantle the full complex of social democratic society.

In the early 2000s, the Moderates got tired of being a perpetual opposition, changed their name to New Moderates, and quietly recommitted to the core of what remained of social democracy. Though their first victory was cause for jubilation on the global right — the standard-bearer of social democracy had fallen — the result was more complex than that. The 1991 Moderate Bildt government had already made some roll-backs, and the Social Democrats had left many of them in place.

But that still made the place one of the most comprehensive semi-socialist states in history, with continued high marginal tax rates, industry co-ordination, free education, a low poverty rate, and more than 400 days paid parental leave. The New Democrats never challenged the explicit commitment laced into political and institutional life by a shared social democratic culture. It was only when the core of that state was no longer under threat that people felt willing to let go of the Social Democrats.

But that shouldn’t blind us to the epochal nature of what has happened — this is the final part of the process begun in the ’90s, when the idea of social democracy as an essential expression of Swedishness began to be dissolved. The Social Democratic Party had cemented this in Swedish culture by developing the concept of the “people’s home”, drawing on nationalist themes. Had the term not been made unusable by the Nazis (who were something else entirely), we’d call it national socialism. 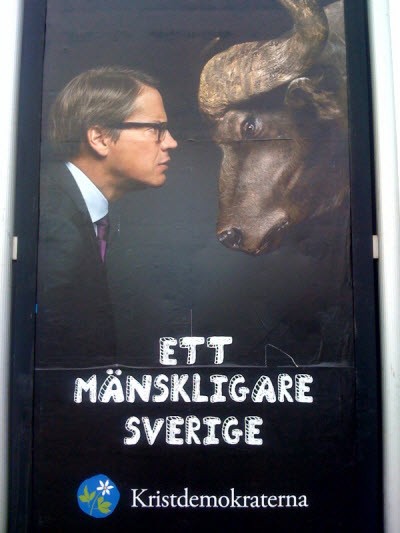 A poster for the Christian Democrat party in last week’s election. No, we have no idea, either. Photo: Ariel Flicka

To a degree that relied on shared life conditions — equality was not merely a numerical thing, but part of the character of people’s everyday existence — and that implied a core national culture, and a state-dominated popular culture. If Sweden’s simultaneous equality and industry made Friedrich “road to serfdom” von Hayek look like what he was — a fool with a fake aristocratic name — it made the place a self-contained and semi-autarchic place, raising itself up through exports: Electrolux, IKEA, Volvo, H & M, and a dozen other companies you never heard of.

That system was buffeted by global financial deregulation in the 1980s, but it also came under pressure from a newly globalised popular culture, emphasising hyper-individualism. As the collective industrial/agricultural life began to be superseded by flows of information, money and services, the collective life that had been a source of identity now seemed like an intolerable restriction on personal activity. The Social Democrats, who had never been popular with people on the further left and the liberal right, now seemed like arrogant jerks to a wide range of people. With the whole notion of the “people’s home” undermined, the social democrats had to compete in the political market and they suck at it.

The other feature of Swedish social democracy was monoculture. I once saw an Australian academic in Uppsala begin a lecture by doing the Oz thang of “acknowledging the original inhabitants” — not noticing the sea of blonde, vaguely identical heads before him. The country has a genuinely deeply rooted, shared culture, which people from more hybrid societies find disconcertingly conformist. But in the post-WW2 years, Sweden extended its ethical mission of equality and neutrality to the wider world, basing its immigration policy on political asylum. The Stockholm phone book is like a geological cross-section of recent political oppression — Papadopolouses, then Davilas and Allendes, then Hassans and Mkzeles. There are even second and third-generation black Americans, offered asylum in the ’50s at the end of the Jim Crow era. Together with economic immigrants, non-ethnic Swedes now make up a third of the population — but an old-world society is much less amenable to a process of integration than new world, frontier societies. The immigrant process has made cultural life — and hence social and economic life — a more negotiated process than hitherto. Despite the propaganda of the US right — who treat the Muslim-migrant dominated Rosengard district of the southern city of Malmo, for example, as if it were Mogadishu — most of this have been handled peacefully.

The Sweden Democrats are gaining their 5% from people who can’t reconcile themselves to this shift. It’s amazing it’s not more. Though Muslims are blamed for the increase of racism in northern European societies, it’s a home-grown thing. Sweden was not merely the home of racial eugenics (Uppsala U, my alma mater, go reindeers!), but it had a solid Nazi party throughout the 1930s (based in a valley of people that event the Swedes find ridiculously blond).

The Alliance have confirmed that they won’t rely on the Sweden Democrats to create a majority government — and they are already attempting to woo the Greens across the aisle. As Ola Tedin points out in the Guardian, the total boycott of the SD — in contrast to the Netherlands, where Geert Wilders Freedom Party, at 13% of the vote, has to be spoken to) — will ensure their status as outsider pariahs, and set them up for the next round. And any minority government sets the country up for an instability to which they are far from accustomed (the Social Democratic Party has had 10 leaders since the 19th century).

The question is whether in the years ahead — as the Right try and push a more neoliberal vision — is whether they would be tempted to take the SD’s support on selected legislation. Would that discredit them, in a Sweden that remains socially liberal? Or would it mark a decisive break with the social democratic era, in a country that has been virtually identified with it for years stretching back beyond any human lifetime?

Whatever the case, it is time to move on, and forge something new in this century to replace the old Social Democratic compact. People say that Sweden can be boring and unchallenging. It can — although it is easy to mistake public reserve for the culture overall — but it is also a feature of passing a certain historical stage. Sweden managed to create a society with poverty practically abolished, opportunity and education vastly expanded, gender inequality vastly reduced, while never losing its capacity for industry, innovation and free social debate.

The cultural problems that has thrown up — a certain atomisation, that led the country’s leading postwar novelist to title his best work The Autistics — are momentous, but the fundamental social achievement marked the gaining of a new plateau for humanity, one to be built on and surpassed, not left to the winter winds and the long withdrawing roar.

You have got to be kidding.

Please tell me you just made this up.

There is nothing wrong with “monoculture”. After all, pure bred animals are always more valuable than x-bred mongrels.

There are indigenous Sami people (also sometimes called Lapps) across northern Scandinavia, and even some still in Russia despite Stalin. Scandinavians can get quite defensive when questioned about their treatment of the Sami. The history contains many familiar problems and policy mistakes. Rank hypocrisy for an Australian to make any comment about other countries treatment of indigenous people, but fun.

In Radio National’s book program a couple of weeks ago there was an interview with a Britain-based Swede about Swedish crime fiction and the dark, corrupt Sweden that it showed in contrast to the social democrat image.

He said that it is partly a reaction to fall-out from the still-unsolved assassination of PM Olaff Palme in the 1990s, where the investigations threw up previously unknown far-right cells inside the police service. He also said that the Right in Sweden was in eclipse for many years after backing Germany during World War 2 when Sweden was neatral.

Or IMHO, that it is now far enough from World War 2 for the Swedish Right to stage a come-back.

Incidentally, my first brief visit to Sweden in 1982 was a pivotal experience of my youth. I’d been in Thatcher’s UK for two years, hearing “There is no alternative” as the nation was torn apart. I didn’t see Sweden as a utopia, but it certainly showed that there were indeed humane and civilised alternatives out there.

The intriguing question arising from Rundle’s analysis is this. Given that there has been an immigration presence in Sweden for many years (including black immigrants), why is it only now that there is some reaction? Is it because of Islamic migrants?