This week, the bovver boys of the respective Parties are the biggest movers.

The respective bovver boys the biggest movers, Christopher Pyne running a million miles from the group hug as the Coalition plays hardball on the numbers … that’s called realpolitik Rob, while Mark Arbib goes on a PR offensive, prompting some commentators to note the electorate’s message from the last 12 months doesn’t seem to have entirely got through to some in the ALP.

Bob Brown the other one to leap up the list and is it just me, or does no-one in the gallery seem to want to report the fact that from 1 July 2011, for the first time ever the Senate majority will be with Labor and a party to the left of Labor? … i.e. whether they are in Government or not, the Labor Party will basically be deciding what legislation gets enacted and what doesn’t for at least the next six years.

Anthony Albanese the other bovver boy to be moving forward, quite hilariously reinforcing how soft and caring he is as manager of Government Business now, if only the Liberal Party would let him. 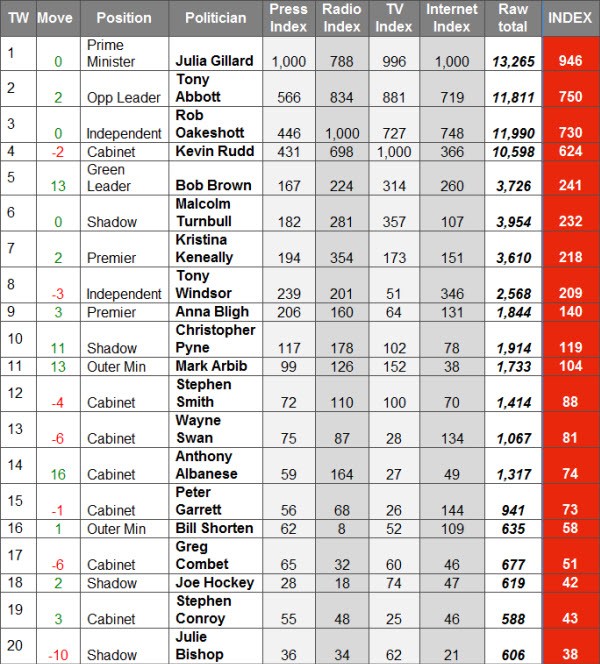 Interesting dynamic this week, with Tony Abbott leaving all the attacking to Christopher Pyne and others and trying to keep the focus on Oakeshott and Gillard, almost like someone’s told him he has to act more prime ministerially — the focus on government is definitely reflected in the talkback numbers.

Yes, yes, we do go on a bit about TV news and current affairs having a different set of “news” values, so all I’ll say is that 1250 of those 1600 mentions were television.