Victorian Socialist Left MP Martin Foley has penned a savage takedown of the federal ALP's election campaign, saying the twin pillars of Labor's traditional supporters had been callously abandoned by a "messy, contradictory and visionless campaign."

Victorian Socialist Left MP Martin Foley has penned a savage takedown of the ALP’s federal election campaign, saying the twin pillars of Labor’s traditional support base were callously abandoned by a “messy, contradictory and visionless campaign that hoped to fly under the radar of serious policy engagement.”

In a 4,500 word excoriation of federal Labor sent yesterday to party activists and titled “The people who believe in things” after Paul Keating’s 1993 election victory speech, Foley lets fly at the Graham Richardson-aping “hard men” of the NSW Right, who he says have become “hollow men”.

“The ‘hard men’ have been cut too much slack. Despite their self serving defences of ‘whatever it takes’, the real work in the ALP is now to rebuild…a compelling policy and political framework. The self described ‘hard men’ who need to take responsibility for the National 2010 campaign have been shown to be the ‘hollow men’,” the member for Albert Park and former Australian Services Union state secretary thunders.

The stunning post-mortem, obtained by Crikey, rejects Noel Pearson’s recent argument that John Button, as “Banquo’s Ghost”, has been hovering over a bloody scene of Labor’s “lost path”. Instead, Foley quotes another Shakespeare classic, saying that the party is “bound on King Lear’s ‘wheel of fire’ by having to deal with the ‘tears of molten lead’ needed to produce a combination of the visionary and hardnosed political response to re-engage the political ground forsaken.” 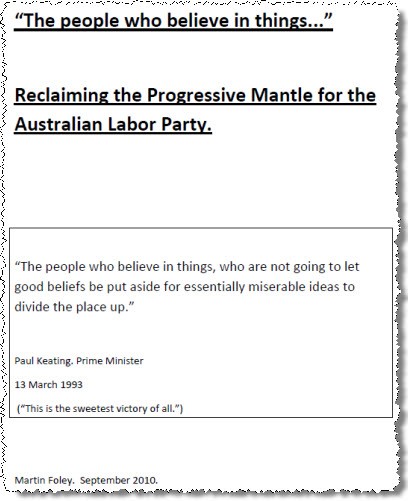 The ALP’s dual constituencies — progressive voters and the traditional working class — were both abandoned in the slavish service of shallow focus groups, argues Foley, and leadership and policy ideas were almost entirely lacking.

“The easy way out is the low rent, empty approach to politics solely for power’s sake. The approach reached a nadir in the 2010 campaign through abusing the focus group tool to generate lowest common denominator policies that resonated with no-one,” Foley writes.

The party’s disastrous campaign was run out of the party’s Sydney headquarters by federal secretary Karl Bitar with special assistance from NSW senator and Labor Right powerbroker Mark Arbib. Incumbent MPs and challengers received most of their talking points from apparatchiks whose chief concern was Western Sydney.

The well-regarded Victorian backbencher says HQ ignored internal polling conducted in the run-up to the poll that showed values voters were about to jump ship. He argues their working class allies were also shown short shrift:

“Both of Labor’s core constituencies demand serious policy and political responses from Federal Labor to show it that it is a sophisticated political organisation rather than a hollow focus group obsessed organisation concerned only with the empty pursuit of power.

“Rather than pointlessly alienate the Labor base built up since the time of the Whitlam era in a quixotic quest for western Sydney’s affection, the ALP is better served to look to models to re-engage with its twin pillars of support.”

Foley says the ALP’s shocking 38% primary vote was a “commentary by voters who had previously supported Labor going elsewhere.”

“…the ALP again vacated the values filed on Climate Change. In what until a moment before had been the ‘greatest moral challenge of our time’ there was now a need for a citizen’s assembly — presumably with its members getting there in newly replaced clunkers.”

Crikey understands that the assembly was greeted with dismay among ALP organisers in progressive inner city seats under threat from the Greens, who believed the policy was cooked up in a panic over potential increases in electricity prices. Foley cites internal polling and an election day Climate Institute survey that found 32% of respondents would have voted Labor if Julia Gillard had proceeded with a Carbon Pollution Reduction Scheme.

On asylum seekers, Foley accuses the party of falling into the trap set by John Howard in 2001, with its hardline approach serving only to drive left-leaning voters into Bob Brown’s clutches. He suggests the federal seat of Melbourne could have been won by Cath Bowtell if the party were serious about its progressive credentials.

In the ‘what is to be done?’ section, Foley says the party’s headquarters should take a leaf out the Victorian ALP’s playbook who have successfully managed the challenge of marrying Labor’s two strands. He notes that the ALP won two seats from the Coalition in Victoria — McEwen and La Trobe — while the rest the of the country stayed static or went backwards.

“The Federal ALP could do a lot worse than look to the model of Victoria to begin the task of rebuilding,” Foley writes, applauding the Brumby government’s staunch commitment to reducing greenhouse gas emissions. He says the party should immediately forge a path to political recovery in the key Brumby-led areas of human rights, sustainable economic and population growth.

Foley was elected to the Legislative Assembly in a 2007 by-election following the retirement of Bracks-era Deputy Premier John Thwaites and holds Albert Park (on the 2006 election result) by 9.5%. He is expected to easily hold the seat at November’s state poll.

On Thursday, the federal ALP will establish a formal post-mortem overseen by ex-premier Bracks and an as-yet unnamed representative of the NSW Right. Yesterday, the prime minister said the review would take in the period after Kevin Rudd’s election in 2007, in addition to the shambolic lead-up to polling day.

SA: Rann returns, but Labor breaches trust on day one

Also with the ever increasing education levels in Australia (who would ususally be progrssive voters), slogans like ‘moving forward’, constant repetitition of midless mantras and no policy engagment whatsever would help either.

The ALP invented the white Australia policy, locking up asylum seekers in the name of politics and so on – where is this progressive party that Foley imagines has ever existed.

I told senior ALP figures in 2009 after the boat fire was so badly handled that 1 million feet just left and went to the Greens. I was right wasn’t I but the morons never listen.

Gillard certainly doesn’t care about asylum seekers except as tools to beat up Ruddock, she never advocated to have kids out of detention or any of the so-called progressive things that Foley has imagined she might do because she simply has zero interest.

I listened to Mungo last night with Philip and must get a copy of the election book. He was right on all scores.

For anyone who cares to have a listen online.

One interesting thing not noted is that in Victoria, NSW and SA the so-called mortgage belt areas swung to the ALP because they didn’t lose their jobs and houses in the downturn thanks to the stimulus (speaking of which do you note that NSW is still using the wretched Craig Mayne and the Herald has reported his words as fact, guess they can’t keep up with reality). It happened in SA in the state election as well because the liberals wanted to cut transport funding.

as for the human rights blurb – yeah right. Doc Evatt co-authored the universal declaration of human rights and the ALP have been ignoring it ever sinse.

Just as we do the convention on the rights of the child ratified by Hawke one year before Gerry Hand invented today’s prisons for asylum seekers. The numbers of tortured children would have anyone else in prison for life but the bastards walk free.

The convenant on civil and political rights, the convention and optional protocol against torture ratified and ignored, the refugee convention is actually enshrined in the migration act and allows for the entry of people without papers and forbids punishment bit.

The media ignore it and after 2 years of me nagging the ABC they finally featured an international law expert on Lateline last night to get the legalities of things instead of stupid Leigh Sales pandering to the likes of the extremist nut job Ayaat Hirst Ali who lied to get refugee status and thinks the conventions should now be scrapped because they are old. Guy Goodwin-Gill said in 2001 after the Tampa that if our policy was any worse we would be shooting people at the borders.

Ao he soon set that notion of Ali’s right, she is just another ultra right winger lying to the world and slavered on by the west because she says all muslims are evil.

WE have no record on human rights beyond a completely dismal one so I don’t know what Foley thinnks has ever existed because it ain’t the truth.