The prospect of further narrowing Labor's potential numbers in the House of Representatives is clearly attractive to an Opposition and why wouldn't it be.

Missing an opportunity. The prospect of further narrowing Labor’s potential numbers in the House of Representatives is clearly attractive to an Opposition and why wouldn’t it be.

The day might well come when an extra vote from forcing Labor to appoint a Speaker with just a casting vote might make all the difference. Nevertheless a strong arguments can be mounted that there is greater political advantage — and certainly a more assured advantage — by losing a vote on the floor of the House and having the Speaker as one of their own.

A Liberal speaker would certainly ensure that proceedings were fair and balanced.

A futile gesture of a military policy. Three stories this morning that make a mockery of the belief that military action in Afghanistan will mysteriously end the threat from Muslim terrorists.

Monday’s warning came a week after the Senate voted in favour of a ban on full Islamic veils in France, which is due to come into force next year if approved by constitutional judges. Al-Qaida’s deputy leader Ayman al-Zawahiri has urged Muslim women to resist the proposed ban.

From the Associated Press:

Thousands of people have fled a village in southern Yemen where security forces are laying siege to al-Qaida militants, a security official said Monday, signaling an escalation in the government’s U.S.-backed campaign to uproot the terror network’s local offshoot …

Yemen’s government has had trouble gaining control of areas in the south that are under the control of powerful tribes, some sympathetic to al-Qaida and other Islamic militants roaming the area.

From Uganda’s The New Vision:

The Police have issued new guidelines for public gatherings and events in Kampala. Under the new guidelines issued yesterday, wedding receptions will only go ahead after getting clearance from the Inspector General of Police (IGP).

“We want to ensure safety of our people. If 32 million Ugandans use their eyes and ears, there will be no space for terrorists in Uganda,” he said. He told New Vision separately that the same measures affect funerals, vigils, last funeral rites (nyimbe) and bibanda, (local makeshift video halls).

And a second The New Vision story:

TWO more Kenyans were yesterday charged with terrorism in connection with the July 11 twin bomb blasts in Kampala. They were identified as Al Amin alias Joe Kimathi, 49, a Kenyan human rights activist, and Omar Awadh, 37, a businessman and resident of Halingham in Nairobi.

The suspects were arrested last week with Mbugua Mureithi, a Kenyan advocate, on suspicion of being linked to the al-Qaeda Islamist terror group. Mureithi, who said he was in Uganda to defend terrorism suspects, was over the weekend deported to Kenya.

A quote for the day on whether j0urnalists should strive to be neutral, disinterested observers. It’s by Jay Rosen in an  interview by The Economist. Rosen is a professor of journalism at New York University and author of the book titled What Are Journalists For?:

I do not think journalists should “join the team”. They bridle at that, for good reason. Power-seeking and truth-seeking are different behaviours, and this is how we distinguish politics from journalism. I think it does take a certain detachment from your own preferences and assumptions to be a good reporter. The difficulty is that neutrality has its limits. Taken too far, it undermines the very project in which a serious journalist is engaged.

Suppose the forces that want to convince Americans that Barack Obama is a Muslim or wasn’t born in the United States start winning, and more and more people believe it. This is a defeat for journalism — in fact, for verification itself. Neutrality and objectivity carry no instructions for how to react to something like that. They aren’t “wrong”, they’re just limited.

The American press does not know what to do when neutrality, objectivity, balance and “report both sides” reach their natural limits. And so journalists tend to deny that there are such limits. But with this denial they’ve violated the code of the truth-teller because these limits are real. See the problem?

Let the good times roll. It reads just a little bit like “here we go again.” The Financial Times of London solemnly headlines a report “Junk bond prices hit pre-crisis levels” while the Wall Street Journal cautions “Bond markets get riskier”. The message of the two financial dailies is essentially the same. Prices on high-yield, or junk, bonds, have hit their highest level since 2007.

There once was a day. Things have certainly changed in Ireland. As the country goes down the economic gurgler, straight laced wowserism is growing. The latest victim is the country’s Taoiseach (Prime Minister) Brian Cowen who is under attack for appearing on a morning radio program after allegedly sampling too much Guinness while at a post party conference party until 4am.

Now some churlish members of his Fianna Fail Party are demanding an emergency parliamentary party meeting to discuss his leadership and all because one Irish opposition politician, Fine Gael’s Simon Coveney, posted an allegation on Twitter that Cowen had been “halfway between drunk and hungover and totally disinterested”. Is it attitudes such as this that are resulting in this? 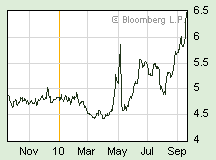 “A Liberal speaker would certainly ensure that proceedings were fair and balanced.”

The former and current Speaker was not fair and balanced??? Harry has set a standard of impartiality and procedural fairness that will be hard to beat. He has every right to the confidence of both sides of the house.

All the rest of the blather on this topic was an attempt by some to wangle a further vote as a buffer for the Government. Nice try, but they failed.