Wilson Tuckey, the 2.0 version, has shown he's not immune to some of the teething issues that often plague online publishing, after his much-anticipated blog went live last week. Plus, other media news from around the globe.

Tuckey 2.0 launches — somewhere. Wilson Tuckey, the 2.0 version, has shown he’s not immune to some of the teething issues that often plague online publishing, after his much-anticipated blog went live last week. Upon calling Crikey today to announce he had published a couple of posts, the former renegade member for O’Connor admitted he wasn’t actually sure of the blog’s address. Eventually, after a phone call to his office and 10 or so minutes of trying every version of Tuckey’s name in Google, the winning site came up.

The blog, which clearly needs a bit of sprucing up design-wise, currently features two posts: one about BHP Billiton CEO Marius Kloppers and another about parliamentary practice. While Crikey is disappointed Ironbar didn’t use any of our suggestions for his blog title (‘Keep on Tuckin’, ‘The Tuckey Country’, ‘Tit for Tuck’), it may be worth keeping an eye on him — for entertainment’s sake at the very least. — Tom Cowie

The evil tag stings. Are News Limited hacks a little sensitive of recent criticism of the Murdoch empire? This from The Punch website today… 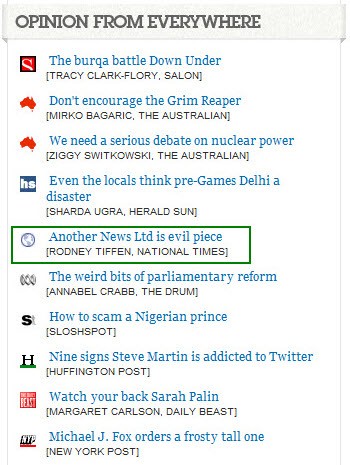 “Laws to protect journalists from being forced to reveal their sources have joined the growing list of legislation that the independents, minor parties and Opposition have vowed to introduce when Parliament resumes next week.” — Sydney Morning Herald

“What do you want?” Mexican paper pleads with drug cartels

“A respected Mexican newspaper has published a front-page editorial asking drug cartels how not to offend them following the murder of a 21-year-old photographer.” — The Guardian

“The subscription push appears to be a sign that newspapers and magazines will be Apple’s next front in its sale of media like music, television shows, movies and books.” — Wall Street Journal

“Google has today launched one of its biggest branding campaigns in Australia to date as it seeks to educate advertisers and publishers about its display advertising platform.” — Mumbrella

“More than 200 nominations were received for the inaugural Australian awards, which the judges narrowed to a shortlist of 45 … The winners will be picked by the public on the website www.themaggies.com.au.” — The Australian

Where satire and politics meet

“Media and entertainment figures like Glenn Beck and Jon Stewart are increasingly taking off the studio mikes and grabbing the political megaphones.” — New York Times

“After more than a year of speculation, Microsoft is finally launching its Zune brand outside the U.S. and Canada.” — PaidContent.org

CNN teams up with journalism schools

“The new CNN iReport University will team up with journalism schools across the globe and invite five final-year students from each to become a Student iReporter subject to an application process.” — Journalism.co.uk